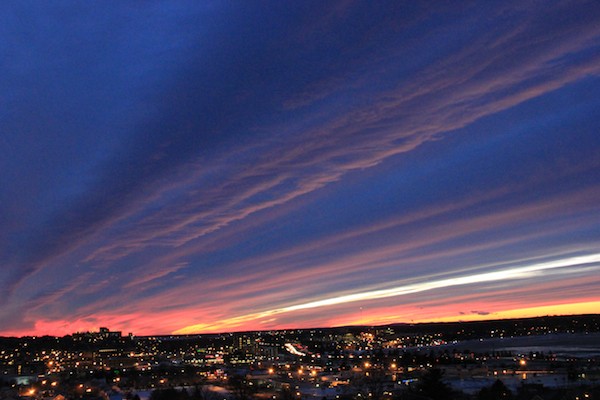 Mercury stations retrograde in early Pisces today, February 6, at 4:43 pm EST. It will be retrograde until February 28. Eric has covered this in his monthly Chronogram column, if you want additional details. Also, Eric has done a detailed reading of the charts of Philip Seymour Hoffman on his Planet Waves FM program.

Pisces is where Mercury spent the entirety of its first of three all-water retrogrades last year. This year, Mercury is merely wading in just far enough to whisper to Neptune before it heads back to the air of Aquarius, where it will be when it stations direct in about three weeks.

Mercury and Neptune do not quite form an exact conjunction. You can think of it as Mercury bringing back some water to the water bearer (Aquarius is symbolized by a youth pouring water from an urn back into a stream). Even without the exact contact, the planets’ energies will blend, magnify each other, or possibly feel like a blind spot in your awareness—something you can feel but might not be conscious of enough to articulate.

Mercury in Pisces, even while direct, can feel a little unusual to those who are not used to feeling their thoughts or thinking their emotions so intensely. Mercury retrograde in Pisces, nearly drifting into Neptune, might feel like you’ve just submerged yourself into a particularly ‘impressionistic’ watercolor painting.

This is all an indication to take things deliberately today, and for the next couple days. The three or so days on either side of a Mercury station tend to be the most challenging part of the retrograde.

Beware that persisting in an activity while your mind is elsewhere (even going on "autopilot" for the most routine tasks) is the perfect recipe for having to re-do work, needing to backtrack in your car to the exit you missed, mailing an important bill without a stamp—or worse. If you can pause the action to work out your thoughts, you may save yourself steps. You don’t have to move like a snail, just know that rushing is not likely to have the desired effect.

In the realm of feeling thoughts and thinking emotions, what do you do if the psychic channels opened up by Mercury-Neptune have you a little overwhelmed? What if you’re getting too caught up in daydreams, fantasies, and romantic shimmer? Or you’re feeling drawn to be less than truthful (with yourself or others)?

Look to the asteroid Pallas, which is roughly opposite Mercury-Neptune in Virgo. Pallas, the goddess of strategy in Mercury-ruled earth sign Virgo says: sit down and make a plan. Diagram it, plot the steps; start small with the most tangible actions you can make. All mariners use charts to navigate the seas—why shouldn’t you if the planet representing your mind starts to drift a little in the ocean of emotion and illusion?