Mind-Mapping Your Approach to the Solstice 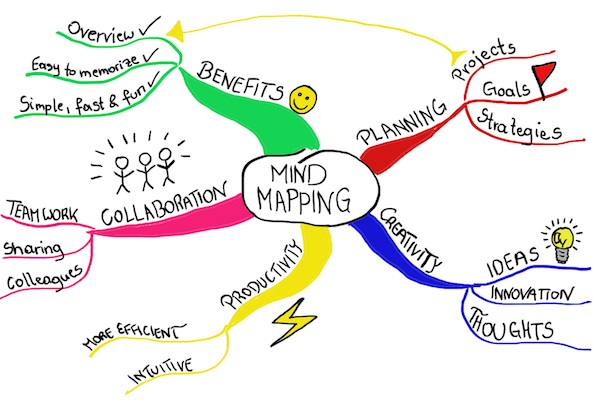 Within a week, summer here in the Northern Hemisphere will begin, signaled by the Sun's entrance into the sign Cancer on June 21. We're almost at the solstice: that time of maximum daylight, when you may experience a sense of extending your energy out into the world more than usual as a result of the longer (and warmer) days.

If you tend to be a natural extravert, it probably feels great to get out there and go, go, go from sunup to sundown, drinking it all in. If you're more of an energetic introvert it could be a little tougher to balance the desire to fully use these long days with a need to stay grounded, slow down, or in some other way nourish yourself.

Speaking to those themes as we approach the solstice are aspects involving the Sun, Mercury and Ceres in Gemini. Today, the Gemini Sun opposes Saturn and the centaur planet Ixion in Sagittarius. Tomorrow, Mercury makes a conjunction to Ceres in Gemini, still square Neptune in Pisces.

Aspects involving Gemini means there's an emphasis on mental energy, your thought processes, and how and what you're communicating. Specifically, it means you'll want to notice how you're handling anything with two sides to the story.

Sun opposite Saturn in these signs could indicate indecision: you're coming up against some kind of limitation (such as an obligation or commitment), and you're torn between what you should do and what you want to do; or between what you said you'd do, and what you now realize you actually need to do. How do you express your needs and still honor the agreements or limits you're facing?

For starters, it's best to do so openly. You engage in a conversation. You look for points of negotiation—where is the other person, or the situation, flexible? Where can you be flexible?

The Gemini Sun opposite Saturn is also an image of your consciousness being mirrored by a structure—for example, like using the technique of mind-mapping to get a better view of a topic. In this case the structure is not a limitation; it's an organizing principle for what might otherwise be scattered or multivalent information.

If you're having difficulty figuring out how to negotiate a boundary or limitation this week, you might see if your thought process and overall awareness benefits from using a clear structure —whether mind-mapping, or something like a traditional chart, graph, outline, or checklist. This might also be where your beliefs about the situation in question can get a clearer reality check. Thoughts need order and focus to be useful in any negotiation, whichever side of it you're on—that is, whether you feel like the one with power or not.

Speaking of power: with the centaur Ixion present we have a caution to be ethical, and to notice the ethics of those you're dealing with. Power is easy to misuse or abuse. Having Saturn in the sign ruled by Jupiter could hint at the potential to overdo things—possibly the “wrong” things. That brings up an important question: if you know what the “wrong” things are, are you being honest with yourself and others about them?

The question of honesty comes up with Mercury's aspects, too. Mainly this is thanks to its square to Neptune, which was exact yesterday, June 13. Neptune here cautions against over-idealizing, and is a reminder to check facts and to communicate as clearly as possible.

Tomorrow, Mercury conjoins Ceres in Gemini while still under Neptune's influence. Are you being honest with yourself about what nourishes you? This aspect pattern is an image of seeing the factual pros and cons, yet being swayed by emotions or wishful thinking instead. You could also read it as a reminder not to ignore your intuition.

Yet consider the mythology of Ceres for a moment. She was the goddess who created the seasons: when she grieved her daughter Persephone's visits to Pluto in the underworld, crops died and the world went fallow; when Persephone rejoined Ceres, the crops grew and the Earth was again verdant. In our world, the cycle of productive and fallow states creates a healthy balance. You're the only person who can decide how wide the extremes can swing and still be healthy and enjoyable for you. You feel the consequences with your body, emotions and overall energy. Ultimately, however, it comes down to using your mind to make decisions that respect your needs and fuel your desires—and to communicate those choices clearly to others.