Since Dallas and Ted Gilpin relocated to Saugerties in 2017, they’ve made a habit out of breathing fresh life into existing businesses, managing to deftly thread the needle as newcomers while keeping locals happy. Their first triumph was a revamp of Saugerties Main Street mainstay, The Dutch Ale House. After an aesthetic and culinary overhaul, the beautified Dutch settled right back into regular rotation for locals and visitors alike.


After that, the couple opened Windmill Wine & Spirits, a destination shop with an selection of natural wines and hard-to-find liquors, to fill the void left by Partition Street Wine Shop. Then, teaming up with hospitality royalty Jenny Oz at the end of 2019, they transformed their property, Shale Hill Farm, into a wedding venue with a catering and event planning business. 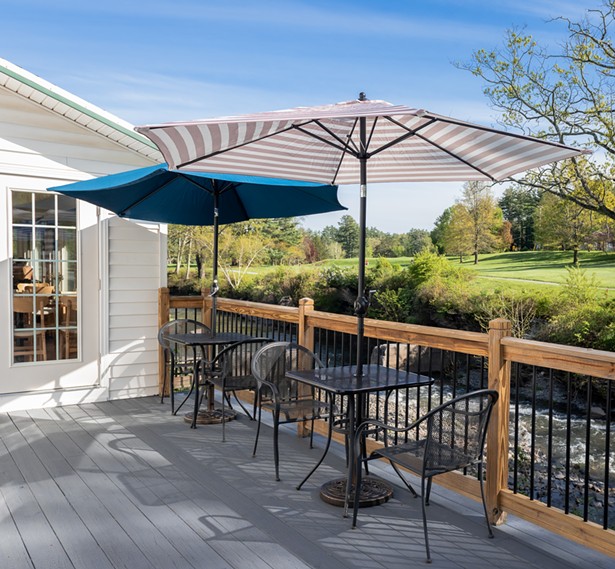 “Our purchase of the Dutch felt a little crazy,” says Dallas Gilpin in mid-June, already back on the proverbial horse just a few weeks after birthing her third child. “But everything else since then has been so organic—just a natural evolution.”


Their latest project, an elegant reimagining of Millstream Tavern at the Woodstock Golf Club, continues in the same vein. “We are friends with the guy who runs the golf club,” Gilpin says. “He contacted us a couple years ago when he knew Provisions would be leaving after their lease ran out, and said he hoped we could do something that would be similar to the Dutch.” Like every project they’ve taken on, it was more than they bargained for, and like every project, they saw it through anyway. 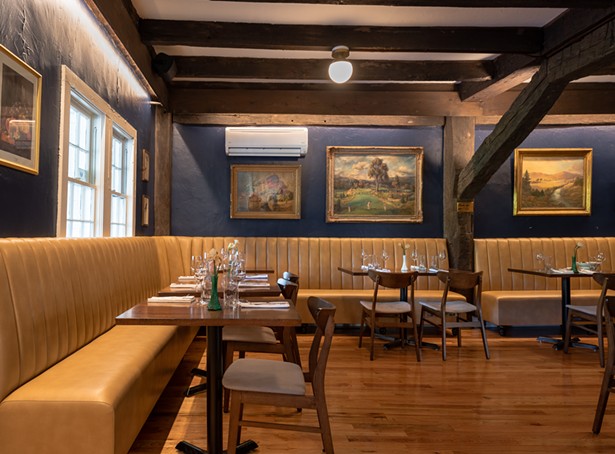 A major silver lining in the pandemic, which otherwise saw the switch to takeout at the Dutch and the cancellation of all their catering and wedding bookings, was that the couple scooped up Michelin-starred chef Ryan Tate, formerly of Deer Mountain Inn, to join their growing hospitality team. Fresh off the death of his mother, Tate needed a break from the kitchen, and so started out at Windmill curating the selection of wines and spirits. But when opportunity came knocking, his culinary skill set returned to the fore.


“The golf club really wanted the space and the food to be resurrected after many years, with the building falling into disrepair,” Gilpin says. “We decided over a long period of time—especially when we brought Ryan on board—that doing something like the Dutch was not appropriate for space. We needed something more elevated, something that fit into the Woodstock community and played into the beauty of the space and the water.”

The rolling greens of the golf course offer a scenic view as you drive into Woodstock on Route 375. The tavern itself sits along the banks of the Saw Kill creek in a historic 1700s millhouse. “It’s a great building, beautiful bones, the original mill is still under the sunroom. There is beautiful millwork and a fireplace, but it had not been cared for in 20+ years,” Gilpin says.


They ended up doing a total gut reno; they took the kitchen down to studs, redid the bar, refinished the floors, replaced all the kitchen equipment and HVAC, and painted the entire interior. “If you give a mouse a cookie…” Dallas says with a chuckle. “The space needed it and deserved it. From the Dutch through all the other businesses, we don’t like to cut corners. We started down the path and wanted to put forth something that was not just up to code but beautiful and well made. So we did it all.” Add to that the desire to create a platform to match Tate’s culinary prowess, and you have the reborn Millstream Tavern.

The refreshed restaurant offers multiple dining spaces, each with its own vibe, and corresponding menus to match. “You can sit on the deck and have a lobster roll and a beer, or head to the gorgeous club room for a fancy dinner and a bottle of wine,” Gilpin says.

We have this amazing Michelin-starred chef. We wanted a place for him to bring out his culinary strengths. We knocked it up a couple of notches, but wanted it to be approachable—we are on a golf course.” Tate, who helped open TriBeCa's acclaimed Le Restaurant, has toned down his adventurous streak for the golf club setting, turning his culinary expertise, instead, to perfecting familiar classics.


“At DMI we only had six rooms. There was no other way to get there. It was a destination. So might as well give them destination food rather than things you can get anywhere,” Tate says. “Millstream is more driven by the fact that it is a clubhouse on a golf course—it is a very crowd-pleasing menu, which feels apropos for the location and for post-pandemic. The public has been challenged more than enough in the past year. At this moment, we are hoping to deliver things that people have familiarity with but the absolute best version of it that you could get.”

For a weekend lunch, start out with oysters on the half shell ($18) and the hangar steak tartare, served with a smoked egg yolk, shallots, capers, and mustard ($16). The cobb salad boasts a stunning presentation, with soft boiled quail eggs, gem lettuce, endive, bacon, avocado, bleu cheese crumbles, and mustard vinaigrette ($15). It’s easily a meal even for the biggest appetite. On the mains, a standout is the crisp chicken sandwich, served with sesame-chili aioli, shredded lettuce, and scallions on a sesame seed bun ($18).


For dinner, indulge in the Canard aux Cerises, a tart duck dish served with cherries, fennel, and sorrel ($30) or bistro classic (hangar) steak au poivre, served with watercress and drizzled in a creamy peppercorn sauce ($26). The pork schnitzel gets a summery twist here, served with a refreshing tomato and cucumber salad, sour cream, and dill ($26).
“Basically we did some internet research to see what club dining might have looked like in the 1980s—what were the dishes that were in fashion at that time or have remained in fashion?” Tate says, “and then we apply our value system towards these dishes.” By that he means local, seasonal, high quality ingredients from regional producers like White Feather Farm in Saugerties, Pine Plains-based beef supplier Meiller Farm, and Blooming Hill Farm in Orange County.

Why the 1980s as a culinary template? Tate chuckles and says, “It was a time of excessive dining. The marketplace was strong, people were making money. I just have this Fletch idea, you know when he goes to the country club and orders caviar and Don Perignon and says, ‘Put it on the Underhill account.’ I think it would be really fun to make that sort of a thing accessible to more people. We’re on a golf course but in a public space.”

On a summery day, the tavern’s creekside setting is hard to beat. Sit on the deck and sip a craft cocktail or split a bottle of natural wine, while the stream gurgles by and the golfers stroll the green.

The drink program was designed by Sandy Nuñez, a veteran of the erstwhile Columbus Circle cocktail bar the Aviary and some other places. Tate is bringing his self-taught expertise to bear on the largely natural wine list. There are 10 options by the glass, ranging from $11 to $15, and a little over two dozen options by the bottle, from a German Riesling ($36) to a Pinot Noir from Burgundy ($145).

As with the food menu, the libations comprise an elevated take on familiar classics, synopsizing Tate’s whole approach to the endeavor. “There are two ways of cooking professionally,” he says. “You can cook for stars and for your ego, and the other is you cook for guests and people’s enjoyment. They can go hand and hand. You can do either and achieve each. But this has nothing to do with San Pellegrino's 50 Best in the World list. This is a straight public enjoyment project.” 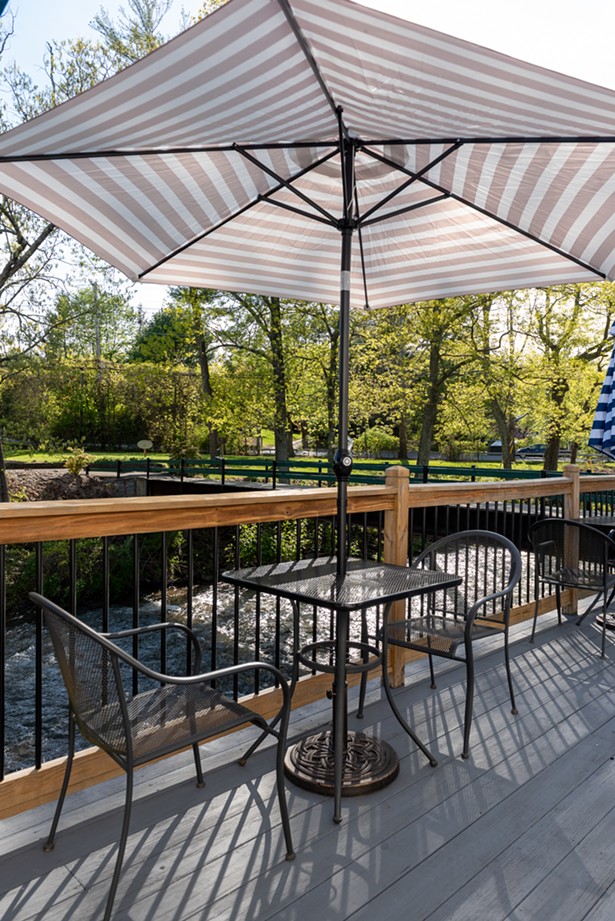