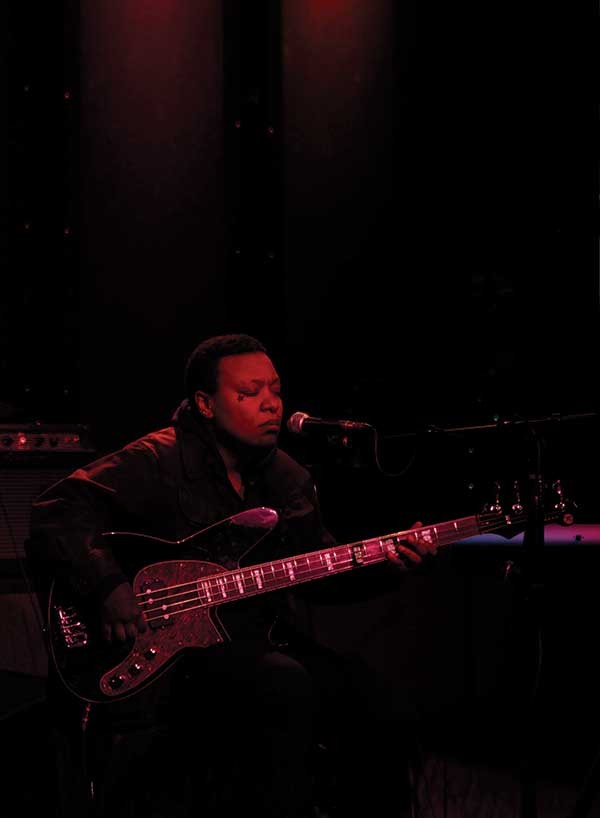 In 1994 a music journalist friend, sensing a common sensibility between the two artists, introduced her to heartland hitmaker John Mellencamp. The meeting, Ndegeocello says, "changed my life." Invited by Mellencamp to join him for jam sessions at his Indiana home, she immediately hit it off musically with the Midwestern singer-songwriter. "We just played and recorded live in the studio, and it was great," she explains. One of the recordings from the sojourn, a co-billed cover of Van Morrison's "Wild Night," became a number-one smash and a constantly rotating MTV hit, taking her from the so-called "urban" charts to the mainstream. While the gratification was great, the sudden rush was enough to make her head spin. "I've always trusted that [music] is my path," she says. "Not to sound contrived, but after a while it was, like, 'Look, what else do you want from me?' I was having to give up a lot of myself." So she stepped off the rollercoaster for a spell.

When she reemerged, three years later, it was with Peace Beyond Passion (Maverick, 1996), an even more creatively realized effort whose slinky grooves carry spiritual and social as well as romantic meditations. It would be another three years between that album and the next one, 1999's Bitter, a beautiful and painfully bleak breakup set, and the one that followed, 2002's feverishly funked-up Cookie: The Anthropological Mixtape (both Maverick). Perhaps most critically lauded was 2003's Comfort Woman (Maverick), whose steamy, sex-dripping psychedelic soul grooves might've made even Barry White blush. And so Ndegeocello had settled into her own groove, so to speak. While remaining oblivious to mass-commercial aspirations, at her own pace over the years she has continued to craft records whose searchingly experimental sounds stir together contemporary R&B with rock, reggae, folk, psychedelia, pop, and other forms; see 2005's jazz-oriented The Spirit Music Jamia: Dance of the Infidel (Shanachie Records) and 2007's dubbed-out, clubby The World Has Made Me the Man of My Dreams (Emarcy Records). Her most recent recordings, which include the new Pour une Âme Souveraine as well as 2009's Devil's Halo (Downtown/Mercer Street Records) and 2011's Weather (Naiive), form a trilogy that finds the restlessly reinventive bassist stripping her sound down to newly austere levels; unlike the bottom-heavy tracks of her earlier albums, songs like Weather's "Oysters" and "Feeling for the Wall" float by like weightless winter leaves. One of the most down-to-earth and genuinely curious musicians you're likely to meet, Ndegeocello gives off the infectious aura of being artistically open to everything. "I try to be very careful not to get stuck in one genre," offers the musician, who has done session work for the Rolling Stones, Chaka Khan, Alanis Morrisette, and others. "To me it's all one thing."

Since moving from New York to Hudson in 2007 with her partner and their young son, Ndegeocello continues to perform abroad, frequently in France, a land whose people she calls, with palpable humility, her "patrons." She's also become an active member of the town's musical community, working with local players like Vetiver drummer Otto Hauser and singer-songwriter Joseph Moore and occasionally with notorious noise band the Bunnybrains, whose leader, Dan Bunny (aka Dan Seward), she calls "the last of the jazz musicians" for his unfettered, freeform approach. (The Bunnybrains were profiled in the April 2009 issue of Chronogram.) Recently, Ndegeocello's passionate musical interests have landed her in the producer's chair to oversee studio projects by a handful of select up-and-comers that includes Belgian soul singer Selah Sue, French jazz vocalist Laika Fatien, and Pistolera leader Sandra Velasquez.

As befits the unconventional Ndegeocello, Pour une Âme Souveraine is no straight exercise in idol mimicry. Hypnotic, stark, and acutely introspective, its moody sound re-interprets Simone-linked classics like "Please Don't Let Me Be Misunderstood," "Feeling Good," and "Either Way I Lose," setting the songs within minimal, pulsing beats and rainy, gray-hued reverb. In another brave move by its maker, the set features lead vocals on several tracks by such guests as Sinead O'Connor, Lizz Wright, and Toshi Reagon. The latter, a long-time friend of Ndegeocello's, appears on "House of the Rising Sun" and "Real Real." "In 2012 I curated three nights of [New York's] Schomburg Women's Jazz Festival," Reagon says. "I asked Meshell to do one of the nights, and she did Nina Simone music. It was incredible. It was the first time I felt like someone understood something about Nina's songbook. Why is that important? Because Nina did not write most of the music she sang. She made choices, and she created versions so powerful that we consider many of those songs Nina Simone songs. Meshell re-introduced some of that music to us by taking the same approach."

Believe it or not, as of late the queen of the funky low end has increasingly been putting aside her main instrument while making music. At a recent housing benefit concert she joined in on laptop for a version of Black Sabbath's "War Pigs" with her Hudson neighbors Melissa Auf der Maur and Rasputina's Melora Creager, and has also been spotted accompanying herself on piano at open mikes. "I'm in a new place now," says Ndegeocello. "They say when you stop giving people what they want, they stop wanting you. And I understand why that is. But, at the same time, when I feel like people just want the same thing from me again, I become disinterested and do something else. I'm like, 'Yeah, that's right, I'm changing. And guess what? I'm gonna change again.'"

Pour une Âme Souveraine: A Dedication to Nina Simone is out now on Naïve Records. Meshell.com.