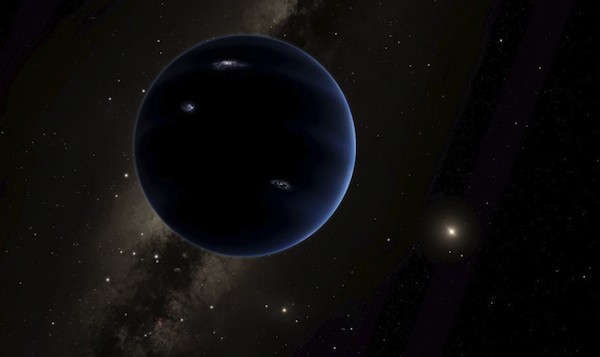 By now, you’ve probably heard about Planet 9, the mystery planet on the far reaches of our solar system that has been more or less confirmed by the mathematics of two Caltech astrophysicists. They have not seen the planet itself -- nobody has; but they’ve been able to infer from the highly erratic (yet similar) orbits of several other objects orbiting our Sun at vast distances that Planet 9 exists. I think that working to parse out the threads of insight offered by a Mercury retrograde can work similarly (we’ve just come through one of those phases, and Mercury is still slow, powerful and rather Trickster-ish).

That is, sometimes when Mercury takes us on its inward review of our psyches, obvious insights and bits of information pop right out at us. But other times we have to survey our notes about what’s happened and what we think about it, and make some inferences.

We can’t always look directly at the thing that is waiting for us to discover it and integrate it into our personal inner ‘cosmology’. Maybe it’s because that thing is painful; maybe it’s just from a time so long ago, we were too young to have much context for it; maybe it’s something that simply runs so counter to how we’ve structured our lives, that to acknowledge it would ask for some serious rearrangement.

Or, it could be that we’re in the habit of fearing things like success, intimacy and our true potential; because, those things -- positive as they are -- ask us to change, and to take risks. Risk is stressful, even when we’re pursuing our deepest, happiest desires. The primitive parts of our brains interpret all stress as a threat to our safety, compelling the ego to throw up resistance to change.

Now, in astrology, Pluto is the god of change. Mars relates to our desires and motivation, but Pluto is the planet that demands change as a requirement for living life, and transforming along the way. Life is growth; sometimes you choose growth, and sometimes you are thrust into it. Either way, it happens. And as one new phase of life emerges, the previous phase is left behind. That transition can come with a lot of emotion, yet it can also feel very liberating.

When Mercury -- the planet of the mind -- conjoins Pluto, as it has been for more than a week, awareness of what is necessary for growth and development increases. Thoughts may penetrate deeply. In Capricorn, those thoughts might concern the past; though when Mercury was retrograde, you might have noticed difficultly in getting much traction to see what to do with your thoughts, beyond simply observing them.

Mercury stationed direct Monday afternoon in Capricorn, conjunct Pluto. On Saturday, the Mercury-Pluto conjunction becomes exact for the second time in just more than a week (12:58 am EST Jan. 30). This time Mercury will be in direct motion as it retraces its steps through Capricorn and then into Aquarius.

One of the things I see here is the potential for you to dive deeper with any metaphorical puzzle-pieces or intuitive nudges you encountered on Jan. 25 (or at any time during the retrograde). With Mercury in direct motion, how to move forward with your new understanding might seem clearer.

In fact, you might even be able to move past inferences of this ‘personal Planet 9’ in your awareness, and grasp something tangible about its presence in your life. Further investigation and analysis might be called for, though watch for any signs that you’re obsessing about it; getting stuck on something is not the point -- growth is.

When Mercury-Pluto is exact, they are also in a rough T-square with the Moon and Black Moon Lilith (a hypothetical point) in Libra, and Vesta and Uranus in Aries. Notice, Saturday, if you feel any pressure from one side to please others (or the imperative not to, and to stand alone in your newfound truth) -- especially in relationship matters. Also, notice if, on the other side, you feel the push of an unexpected creative spark or sense of devotion to reinventing yourself.

Do you dare follow that spark, and your truth (even in a small way, or just within your self-understanding)? Do you cling to the past, even if its concreteness is crumbling to make way for a new structural awareness? Can you let your personal Planet 9 into your cosmology?