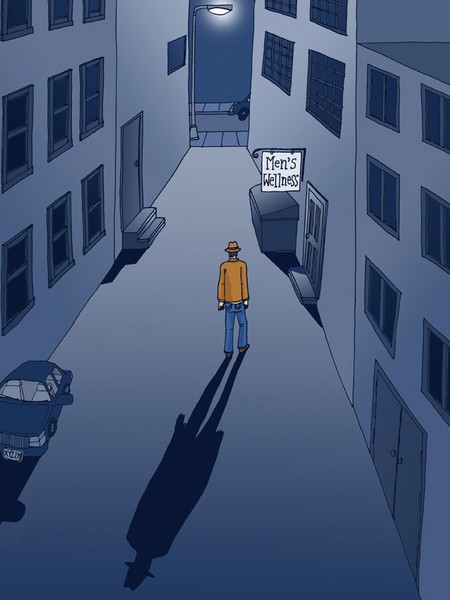 Bookstores nowadays devote many shelves to health, often including a section highlighting women’s health. But a section on men’s health is a rarity, and sparsely populated: A bookstore I recently visited had one lonely volume, about the prostate. Surely there’s more to be said?

In this article—the first of two—I’ve asked a few of the Hudson Valley’s men to share some thoughts about men’s health issues from a holistic viewpoint, based on the work they do with men and their own experience. This piece touches on topics of mind, heart, and spirit, with humble apologies for leaving out (for want of publication space) diverse other facets of a man’s wellness. The second article, in the August issue, will address men’s physical health.

A MAN'S WORLD
One of my men friends occasionally confesses he simply has no idea what phrases like “finding one’s true self” and “looking inward” mean. He’s a successful professional, a husband and father, and a generous man. His life has been productive, financially rewarding, and generally satisfying. But more recently, in his elder years, an anxiety is building, and he’s become curious about a different kind of happiness. And while younger men increasingly are seeking self-awareness and personal growth, many in this society still agree that success in the work world, as my friend sought foremost, and providing for themselves and their families in monetary and material ways, is paramount.

“There is still an ethos today in men that part of being a man is taking care of one’s business,” says Chris Kadison, an MA in clinical psychology and MAC in private practice at the Woodstock Therapy Center. “We still tend to define ourselves in terms of what we do rather than who we are. A lot of that is our occupations.” Kadison points out that the current economic milieu, which has cost many men their jobs, savings, benefits, and/or expendable income, is exacerbating the anxiety men carry about being successful. “Even those of us who are still employed have more anxiety about keeping our jobs, and it reaches across the socioeconomic spectrum. There is a general tendency in the whole country toward hunkering down.”

David Basch, a professional certified coach and consultant based the Hudson Valley and in New York City, concurs. “It’s important to a man to feel productive, in the sense of having a purpose, and to feel self-sufficient and powerful. Women may have this too, but it’s especially so for men.” A man who has lost his job or financial security, or who can’t be sure he’ll be able to provide for his family as he wishes, has been wounded at the core of self-worth. He is dealing with a loss on several levels, including one of identity—whether he recognizes it and talks about it, or doesn’t.

LOSS AS GROWTH
It may sound like a female thing to say “Loss teaches you to grow, and can lead to greater happiness,” but men who have been through the process also say it happens—usually because an all-out crisis forced them into it. The loss of employment, of a loved one, of one’s own health, or even of a retirement portfolio can derail a career-oriented identity onto a different, and ultimately more fulfilling, track. “We don’t grow when we’re comfortable,” says Basch. “It’s in the face of change that all the opportunity for growth occurs. It’s a great place to be.” Basch himself left a successful Madison Avenue career in advertising. “I was finally asking the proverbial question, ‘What do you want to be when you grow up?’”

Loss, change, emotional parcours—few people of either gender rush to experience these things, but men especially aren’t keen to grapple with them. Grieving may be involved, in its several stages, any of which can be difficult waters to navigate. “Grief is how we relate to loss or the anticipation of losing something we care about,” says Kadison. The stages of grief as described by Elizabeth Kübler-Ross, from her work with terminally ill patients, are denial, bargaining, anger, depression, and acceptance. Kadison describes them briefly, as follows.

“The first reaction, denial, includes emotional numbness and magical thinking—that if I don’t believe it, it’s going to get better. It’s a normal and healthy reaction to any psychological trauma, since denial serves as a buffer against letting in the full shock of the reality, giving us time to make a shift so that we can absorb it. The next stage is characterized as bargaining. We try to make changes, bargaining with ourselves, or God, or loved ones—anything that might mitigate or reverse the loss.” When bargaining fails to alter the reality of a loss, we typically reach a stage of anger. “We want to blame someone,” says Kadison, “but who? Blame can be turned inward and result in depression and acting inward, or acting outward—such as in violent or manipulative behaviors, or patterns of addictive consumption. We’re trying to fill an unfillable hole. If the situation doesn’t respond like we wish, the next stage is depression—the two H words: helpless and hopeless.” It may take the help of a counselor, friend, mentor, or other resources to move through any of these stages to reach the last one, acceptance of the loss.