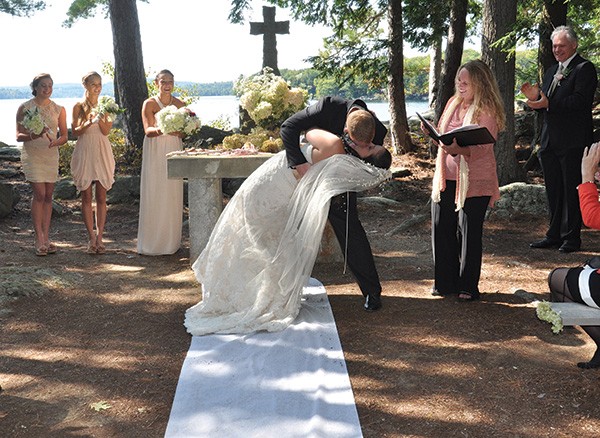 The officiant: one of the most essential components of your wedding ceremony. It's this professional's job that legally binds you as husband and wife; or husband and husband; or wife and wife. Either way—without them tying the knot becomes impossible. According to Right Reverend Stuart B. Chernoff—or Rev. Stu—as he's called in the biz, to legally marry a couple, it's as easy as simply asking "Hey, do you two want to get married?" No razzle-dazzle or fluff necessary, as long as the person posing the question meets the legal requirements—which in New York State means: being a mayor, judge, justice of the peace, or an officially ordained clergy of any religion. But with all of the legal mumbo jumbo aside, every officiant does their job differently to bring meaning and personality to your ceremony. Here, we explore the different approaches that wedding officiants take, from the downright wacky to the totally traditional.

Why is the officiant so important? You may have been to a ceremony and thought, "Hey, this isn't half-bad." As in, this two-hour full mass hasn't made me want to poke my eye out. It's probably because the priest was actually pretty darn entertaining, right? On the contrary, you may have been lulled into an afternoon nap. Choosing the appropriate person to officiate your ceremony can take the day from ho-hum to completely enjoyable, all thanks to one person—many of whom choose this career simply because they get so much joy out marrying the couples who seek them out. According to Chernoff, who does approximately 50 to 70 weddings between the months of April and November, "I love marrying people. You can ask both of my ex-wives." Joking aside, he explains that it's the pinnacle of peoples' lives and that, by officiating, he gets to be a part of it forever. Also, he's not one to turn down a martini or two at the reception.

From Traditional to Totally Wacky

Just like any aspect of the wedding, from the ring to the dress, the officiant is not a "one size fits all" part of the day. Chernoff says that each couple comes to him with a different vision. "Some want the movie wedding, with the whole 'dearly beloved' bit." And he happily gives them the traditional ceremony that they've always wanted, because those couples have waited their entire lives to hear "You may kiss the bride." But he also gives an alternative: Some couples ask him to say, "You may kiss the groom." Or even something more impromptu, like, "You wanna kiss? Well, what are you waiting for, already?" Many just leave it out altogether.

Poem: My Daughter's Getting Married