I call it "happy meat." It's my shorthand for meat from animals that are raised humanely, eating a natural diet in their natural environment and meeting their makers in as stress-free a manner as possible. "Happy meat" stands in stark contrast to meat from animals raised in factory farms where they are routinely dosed with antibiotics, fed a diet that often bears little resemblance to what they would eat in the wild, and subjected to a (mercifully short) lifetime of profit-maximizing cruelties.

As awareness of the meat industry's unappetizing practices spreads, so, too, has the demand for meat that is humanely raised by local farmers—a shift in consumer consciousness that is taking place both nationally and locally. Fortunately for us, supply is following closely on demand's heels, and the Hudson Valley recently welcomed not one, but two new shops offering locally and humanely raised meat products. 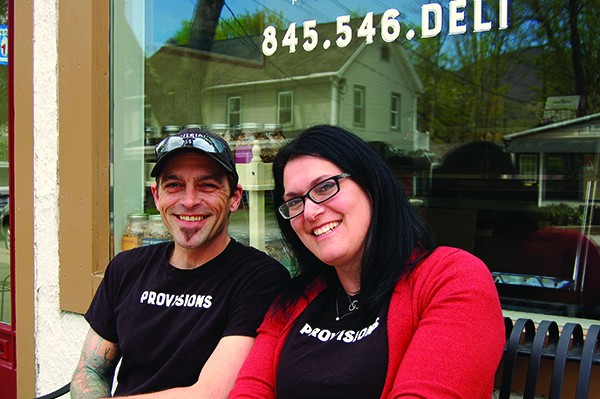 A Different Kind of Deli

On Woodstock's main drag, Provisions is offering up what some are calling "the best sandwich I've ever had," made with local, humanely raised meats that are butchered and prepared in-house and paired with goodies like the fresh mozzarella and focaccia that are made each morning by co-owner Anthony Heaney.

Heaney, a veteran of the local restaurant community who has also worked as a stone mason, landscaper, and beekeeper, trained as a whole-animal butcher at Dundore & Heister in Pennsylvania last year. "This is the first time in my life that I've been able to make a connection between what I was cooking and an actual animal—there was a whole pig on the table and now it's a sausage, egg, and cheese on our homemade bread. And that's pretty much the coolest thing ever—connecting it from the pasture to the plate," says Heaney.

Co-owner Emily Sherry-Bonilla also got her start working in local restaurants before going to graduate school. While she was finishing up her masters in social work, she answered a Craigslist ad for a part-time job as an assistant to Jessica Applestone of Fleisher's Meats in Kingston. Long story short, the part-time job morphed into a very full-time gig and Sherry-Bonilla eventually became Fleisher's COO. "When I met Josh and Jessica (of Fleisher's) I was pretty close to a vegetarian, as were my children. I was really concerned about getting them clean food with no antibiotics in it—that I could afford, and they really opened my eyes to what existed," says Sherry-Bonilla.

Heaney and Sherry-Bonilla have been friends ever since the sixth grade at Rondout Valley Elementary school. After spending many years putting in long hours for other local establishments, both were ready to step out on their own. "We realized that we had very different strengths but that they could work together," says Sherry-Bonilla.

The fact that they were financing and staffing the venture on their own allowed them to move quickly, opening for business at 65 Tinker Street in mid-April, a mere two months after signing the lease for the space. According to Sherry-Bonilla, business has been nonstop ever since—a mix of loyal locals and tourists who either wander past or actively plan a pilgrimage after reading one of the glowing reviews on TripAdvisor or Facebook. 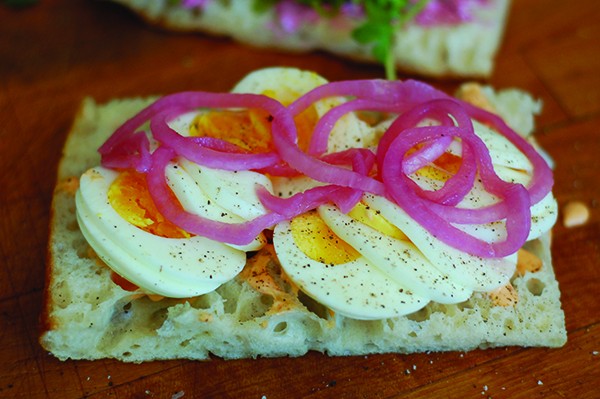 Although the sandwich offerings change daily, early favorites include the Bird Is the Word—pulled roasted chicken with a roasted lemon and dill aioli, arugula, and fresh tomato, and The Horse You Rode in On, Provision's house-made roast beef with house-made pickled onions, fresh arugula, and a beautiful bright purple horseradish roasted beet crema. The breakfast sandwiches get plenty of love too, with one patron describing the house-made sausage, egg, and cheese on focaccia as "a party, actually a full-on rager (keg stands and all) in my mouth." But the sandwich that's inspired the most devotion is the Provisions Banh Mi—roasted pork belly, pickled jicama and daikon radish with a cilantro-hoisin slaw. For my part, my heart belongs to the pastrami—the result of a complicated, weeklong process that results in a mouth-watering mouthful of meat. "We let the beef brine for many days and then it dry cures and we smoke it—we have a wonderful smoking partner in Steve Slutsky at Hickory Smokehouse on Route 28. Then it gets steamed here and we cool it for 24 hours," explains Sherry-Bonilla.

Although both owners have many years of experience in the kitchen, Sherry-Bonilla credits some of the food's appeal to Heaney's butchery training. "When you understand the animal that way, you've got way more power to make it taste delicious. You know what part of the animal the meat is from, what kind of work that muscle did and how much fat is in it—and all of that matters."