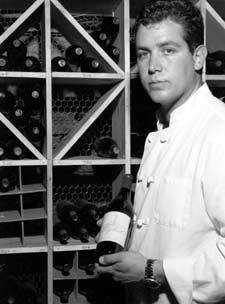 Known for diners, pizzerias, all-you-can-eat buffets and cheap gas available along its Route 209 corridor, southwestern Ulster County seems an unlikely place to open an upscale eatery.  But, concluding that it's only a matter of time before regional redevelopment blossoms there, Marcus and Jamie Guiliano chose New Year's Day of this year to open Aroma Thyme Bistro in the Village of Ellenville.

"Main Street is coming back," says Jamie, a former elementary school teacher who runs the front of the house.  The bistro's brisk and steady business supports her viewpoint.  "Many people say that we have started a trend and should be part of the revitalization history of Ellenville."

Village manager Elliot Auerbach concurs.  Speaking to me over a glass of Santa Lucia mineral water, seated at a table in the mock-rustic interior of the Guilianos' establishment, he ticks off the addresses of recently purchased buildings in the vicinity slated for large-scale redevelopment.  "Two more bistro restaurants are coming into the village.  The momentum started quite honestly with Jamie and Marcus choosing to open their restaurant in Ellenville, and part of it has to do with the fact that [the Guilianos are] homegrown." 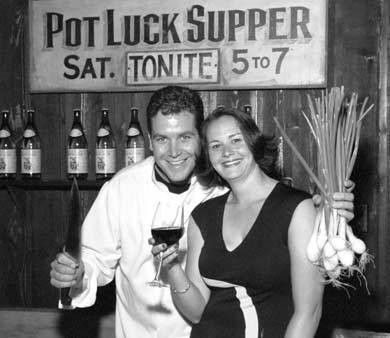 Natives of Ellenville, the restaurateurs met during childhood and have been together for 15 years, six of them married.  Marcus, who acts as chef and kitchen manager, attended cooking school at Sullivan Community College in the early 1990s and afterwards trained in several notable kitchens.  Introduced to "conscious cooking" at famed West Virginian resort The Greenbrier, he later toiled under celebrity chef Pierre Koffmann at La Tante Claire in London (then one of only 25 Michelin-rated three-star restaurants). Landing in Colorado Springs, the budding fine dining gourmet honed his skills at The Broadmoor, the longest running (since the 1960s) Mobile-rated five-star resort in the United States.  Closer to home, he was the executive chef at both Millbrook Golf & Tennis Club and Bonnie Briar Country Club in Westchester, and he also did a stint at the Depuy Canal House.  Resettled in the area, the Guilianos perceived rising value in Ellenville's real estate market and purchased a home there in 2001.

During their time in Colorado, Jamie taught school while Marcus worked as part owner of Walter's Bistro, where the culinary vision that now defines Aroma Thyme evolved.  With the birth of the couple's first child (they have two), Marcus became determined to serve food in the restaurant similar to what the family ate at home-pure and of good quality.  His philosophy included establishing and maintaining trusted relationships with producers and growers, particularly those who practice humane and sustainable farming and fishing.  "We took pride in the food we bought for Walter's," the chef recalls.  "Days off we would drive around to visit and buy from farms."  Meanwhile, he experienced a lifestyle epiphany.

Overweight, plagued with high cholesterol, and facing an operation for acid reflux, he happened to catch Gary Null promoting his then new book Get Healthy Now: A Complete Guide to Prevention, Treatment, and Healthy Living (1999) on public television.  Marcus rushed to a health food store for a copy and read it immediately.  (He subsequently contributed numerous recipes to Null's recently released The Power of Aging.)  "Its principles about detoxifying, exercise, and a whole-foods diet changed my life.  I wanted to bring this knowledge to what we did in the restaurant," he says.  Renouncing industrial megafarms, Marcus began buying free-range, pasture-raised, and certified organic meats from ranches and small farms, and he encouraged fruit and vegetable growers to cultivate crops specifically for restaurants.  He likewise visited slaughterhouses, including GNC Packing, a small, independent processor in Colorado Springs-lauded in the final pages of Eric Schlosser's Fast Food Nation (2001)-with whom the Guilianos continue to do business today.  Though he presently adheres mainly to a dairy-free, vegetarian whole-food diet, the Ellenville proprietor insists, "But I do taste meat because that's my job."


The meat served at Aroma Thyme comes from one of only two meatpacking plants in America that employ a process called "rinse and chill," approved by the USDA five years ago.  Marcus takes credit as the first chef in America to use this product.  Rinse and chill technology involves injecting a liquid nutrient solution into an animal's cardiovascular system within minutes of putting it down, reversing rigor mortis and  washing away residual blood so that cells float freely. 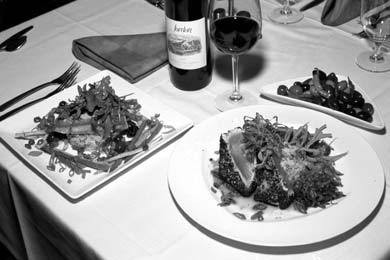 According to a study conducted by the University of Minnesota, which Marcus shared with me, the benefits of rinse and chill processing include longer shelf life, improved tenderness, a 23 percent reduction in cholesterol, and an absolute resistance to E. coli.

In addition to rinse and chill beef, Aroma Thyme serves only wild salmon.  "I have to know the port of entry for every fish," the chef insists.  Procuring almost exclusively from independent vendors, he likewise orders organic foods as much as possible, including 100 percent organic grains, nuts, seeds, and legumes.  The restaurant's fresh produce comes from Rusty Plow in nearby Ulster Heights.  "For years I thought cooking was having happy customers.  Now I know that good cooking requires making the whole food chain happy-to give life back to the farmers," Marcus says.

Passing through the arched-window glass-front entrance of Aroma Thyme Bistro, you step into a homey interior greeted by enticing smells both savory and sweet.  Divided into two main sections, the central dining room with three generous booths and a row of center-aisle tables faces the curving mahogany bar.  Two connecting archways in the rear lead to a smaller room that holds four tables.  Hardwood flooring, knotty pine wainscoting, diamond-patterned soft green walls, reproduction red tin ceilings, and drop fans create visual flow throughout the restaurant.  Antique sign reproductions by local artisan Roger Baker project a regional feel, announcing "Trout Brook-Oswego" and "Organically Grown-Cragsmoor."  Bottles of sparkling water line a shelf in the front dining room, while wines from around the world (selected from over a hundred the house serves) are displayed behind the bar alongside anti-oxidant essential oils such as lemongrass, ginger, and tarragon, used as seasoning in the Guiliano's cookery to embolden dishes with rich flavors.

On a Friday night last month, Aroma Thyme's seasonal menu featured Mediterranean and Asian-inflected appetizers, six varieties of 12-inch, whole wheat thin-crust pizza, a selection of soups and salads, and nearly a dozen entrées.  Seated at a cozy corner table that afforded a sense of privacy despite the bustling crowd, my party of four sampled generously from the offerings, all artfully presented on square-edged white porcelain plates.  From the starter list we found the steamed green-lip mussels with garlic, white wine, and essence of lemon most rewarding, enhanced by a crisp bottle of Sauvignon Blanc from Araucano, Chile.  The chilled seared sea scallops served with soba noodles and tossed with sesame peanut sauce likewise satisfied, as did the thick-textured puree of sweet potato soup.  We also tasted two styles of pan-seared gulf shrimp, one glazed with chipotles and the other with a delectable cream curry sauce.  Next we split a goat cheese, roasted pepper, portabella, and black truffle pizza, finding it crisp and flavorful.

For main courses, we chose fish and beef dishes and selected another Chilean wine, Cabernet Sauvignon Mont Gras from the Colchagua Valley.  Generously portioned, the sesame-crusted yellow fin tuna was served rare, complemented by a citrus soy glaze and a wakame seaweed salad.  A small-farm top sirloin steak arrived tenderly cooked and topped with lime, cumin, and cilantro mojo.  The grilled filet mignon was classically presented with pepper vincotto.  The slow-braised free-range lamb shanks, while expertly prepared, got a bit lost in the creamy polenta and accompanying vegetables, sliced julienne style.  Pleasantly full at this point, we split a slice of mousse cake prepared by a local baker.  It is the only item on the menu that contains white sugar, which-along with white flour-Aroma Thyme does not use, opting instead for natural sweeteners and ground grains.

Although inspired by Marcus' talent for incorporating holistic with traditional foods, all four entrées were served with the same side dishes.  When I mention this to the chef, he tells me, "It's a small kitchen and we prepared the limited produce procured fresh that day from Rusty Plow, who showed up for the next delivery with five or six more vegetables.  Generally, I try to have at least one special vegetable that complements each dish; we're striving for more uniqueness and more individuality of each plate."  Young, energetic and enthusiastic, the Guilianos promise to settle into creating signature food in a comfortable, neighborhood setting.  "This is our home," Jamie concludes.

Let's Get Weird: A New Artist-Run Shop in Ellenville