Matt Pond PA: A Man for All Seasons 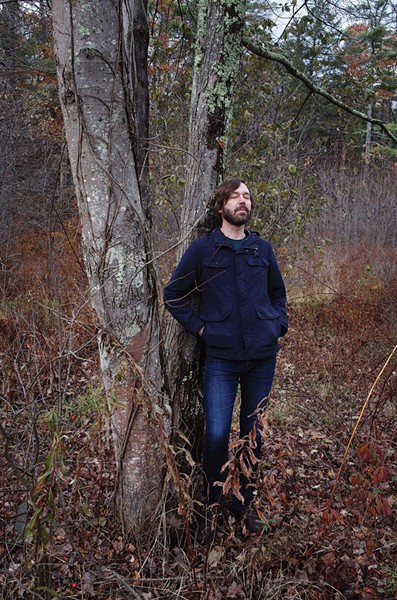 For a while when I was a kid I wanted to be a forest ranger," says Matt Pond. "But my older brother mocked me so much about it that I gave up on the idea. When I was in high school I loved being able to take a break and go hide out in the forest. I still do. But for me, it's not as much about being a nature lover as it is about being an escape artist."

Somewhat surprising, to hear from a singer-songwriter whose back-to-the-land themes and aesthetic would seem to paint him as the modern-day Henry David Thoreau. It's complicated, Pond's relationship with the flora, the fauna, and the changing of the seasons. For Pond (real name), the nature references that weave their way through his 10 albums and assorted EPs (song titles: "Green Grass," "A Part of the Woods," "The Trees and the Wild") aren't simply a bundle of naturalist love letters—although, sure, there are some of those in there, too—to be taken at surface value. Beneath the bark live layers to, well, ponder. "I try not to read a lot of reviews of my records; it always feels weird to me," says Pond. "But there was one I saw recently that mentioned 'Street Squirrels' [from this year's Still Summer]. The writer was putting it down, saying that I shouldn't be writing songs about squirrels. To me, at least, that song [lyric: 'Street squirrels don't think twice / Between the lines and tires of death'] is clearly about people, not squirrels. When I read that part of the review I was, like, 'Man, do you know what a metaphor is?'"

Pond grew up in Northwestern New Hampshire as the son of a therapist/homemaker single mother; his father was a humanitarian who helped place Cambodian war orphans with American families, one of which was Pond's. "We had several of them living with us at different times," he recalls. "I learned to swear and sing songs in Cambodian." Before he started writing and signing his own songs, he tried his hand at learning piano, trumpet, and French horn, giving them all up by the time he was 12. "I wasn't one of those people who grew up loving music in a musical family," he admits, although he does have fond memories of his father mock-conducting to classical records. "It wasn't until later, when I was around people who were more supportive of the idea of me playing music, that it started to feel right. This was in the '80s, so I kind of came in on the cusp of punk and new wave, but I was also listening to Neil Young and the Beatles and a lot of country rock. I read about Joni Mitchell and the way she used different tunings, and that got me more interested in playing guitar. I'd steal some beers and go practice in our basement, which always seemed to be flooded."

Pond's lifelong affinity for literature has also shaped the rustic-symbolist tack of his tunes. "I loved Walker Percy, Annie Dillard," he says. "I just read [Milan Kundera's] The Unbearable Lightness of Being for, like, the 20th time. It's fun being nostalgic about certain writers or movies when they bring you back to a certain period of your life." Pond attended Bard College, focusing not on literature but on history and general studies. "At the time, I wanted to be like one of those professors out of Salinger [The Catcher in the Rye]—you know, smoke a pipe and just be an academic."

Pond's professorial aspirations were fleeting, though. In 1998, after three years at Bard, he threw together "a few grab bags of clothes and a guitar" and relocated to Philadelphia. "There really was no city quite like Philly back then," recalls the singer, who was lured there by native friends, a thriving arts scene, and comparatively cheap rent. "It was definitely a rough place to live, very dangerous, but there was a lot going on [artistically]." With some friends he started a short-lived band called Mel's Rockpile (a reference to a recurring "SCTV" skit), which he describes as a "dumb, self-protective cocoon. But playing in that band helped me get where I am because it made me want to write music that meant something, instead of what I was doing with them."

Serious about having a vehicle for the reflective, lyrically illustrative, folk-based songs he'd been writing, Pond assembled the first lineup of the changeable backing band he dubbed Matt Pond PA, the "PA" a nod to the project's Pennsylvania birthplace. From inception, a crucial component of the project's sound has been its use of strings, mainly cello but also occasionally violin, which have seen the act described as chamber pop. "I've always loved ELO and a lot of classical music," he explains. "I wanted to find a way to have strings but not make them incidental. Even though I can't write music or charts, just humming the parts to the players and having them try to approximate that has worked pretty well."