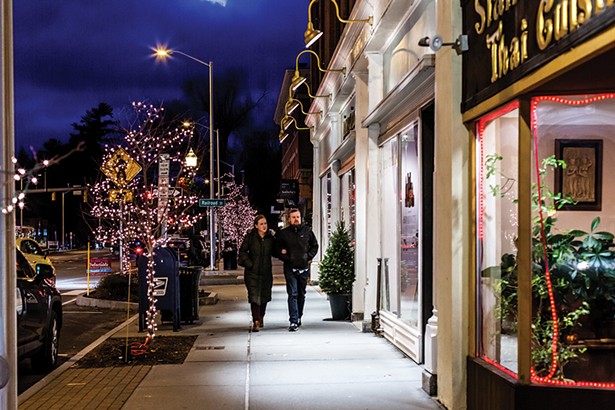 This time of year, Great Barrington charms. Its snow-covered New England streetscape is filled with cozy-chic shops and restaurants that excel at assuaging holiday hangovers and impending seasonal affective disorder.

But beneath the Rockwellian facade, tectonic plates are shifting, as unprecedented forces of change roil beneath this Hudson Valley/Berkshires border town. Massachusetts's year-old recreational marijuana industry has claimed Great Barrington as its western capital, three major mixed-use construction projects are in their final stages, and a battle over the return of horseracing to the town's forgotten fairgrounds has tested this vocal and engaged community's civic morality.

"It's a weird time in Great Barrington," said Betsy Andrus, Southern Berkshires Chamber of Commerce executive director. "There's always an ongoing evolution, but we are finishing up a period of great growth. Now we get to decide how to take advantage of that."

Theory Wellness cofounder and CEO Brandon Pollock suggests Great Barrington visitors make his recreational marijuana dispensary, just outside the town center, their first stop. Since opening in January 2019, Theory often has lines snaking through its parking lot and down the street. "From our perspective, every adult should have safe access [to marijuana]," Pollock says. "Our goal for our products, from the beginning, is to emulate the awesome local craft beer movement. We're honestly surprised at just how successful it's been."

While the CEO demurs from talking numbers, he says Theory will pay over $1 million in municipal taxes in their first year. That's an impactful windfall for a town with a 2019 operating budget of just over $11 million. Theory pays six percent in taxes just to Great Barrington. The Berkshire Eagle did the math over the summer and posited Theory was on track to gross over $30 million in their first year. 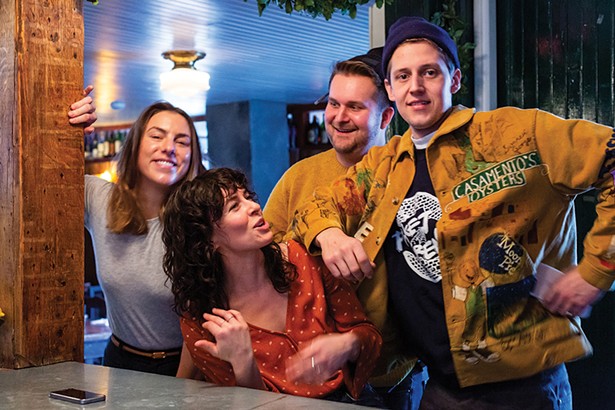 While Theory was able to open immediately after state legalization because of a previously held medical marijuana license, another shop slated for Main Street has been stuck in a licensing labyrinth for over a year. Calyx Berkshire Dispensary, a female-focused, women-owned-and-operated shop, has remained an empty storefront as owner Donna Norman jumps through bureaucratic hoops. "It's been crazy, but the town has been super supportive," says Norman, who hopes to receive her state provisional license this month, after applying in October of 2018. "I'm very excited to be that neighborhood store, where you see who's running the show."

Marijuana businesses in Massachusetts run by women were supposed to get priority in the licensing process due to the overwhelmingly white-male presence at the top of the industry, but Norman says her application process stagnated for months as she proved to the state, among other things, that she was indeed a woman. While she has paid a year of rent on an empty piece of prime real estate, and she's heard growing skepticism that Calyx will ever open, Norman doesn't begrudge the state agency workers overwhelmed by the task of implementing new laws and policies.

In December, the Massachusetts US Attorney's office mounted an investigation into how some municipal politicians have been improperly shaking down dispensary applicants for cash. Great Barrington, along with many other towns, confirmed they had been subpoenaed. Both Pollock and Norman say the town has been a great business partner. Norman speculates that the subpoena of Great Barrington's "Host Community" activity was simply a matter of due diligence. (A special provision of the Massachusetts marijuana legislation is the Host Community Agreement, which is essentially a tax paid directly from the marijuana retailer to the municipality where it's located.) 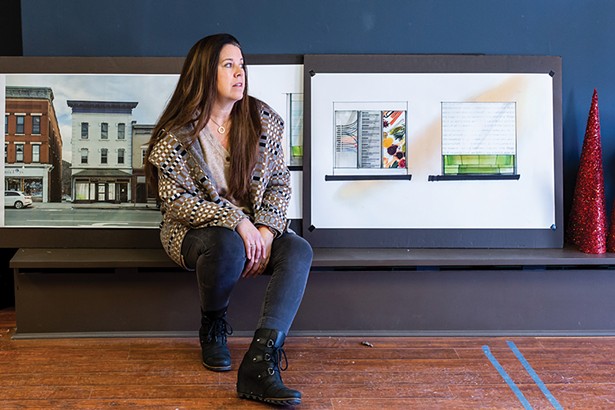 The municipal purse and Theory's owners aren't the only ones profiting from weed money in Great Barrington, however. Many other businesses have anecdotally noted an increase in patronage from folks coming into town to buy legal weed from Robin's Candy Shop and nearby Barrington Brewery to (of course) the Shire Glass boutique head shop, and Theory's neighboring McDonald's, pot is clearly a gateway drug to shopping local.

Another Type of Growth

INC Architecture also recently finished an adaptive reuse of 47 Railroad Street, originally constructed at the turn of the last century as the Granary of Great Barrington. Though the highly visible construction and vacant storefronts were a source of some public consternation, the now complete renovation features 13 apartments and the bottom floor is home to buzzed-about new bar and eatery Moon Cloud (more on that later). 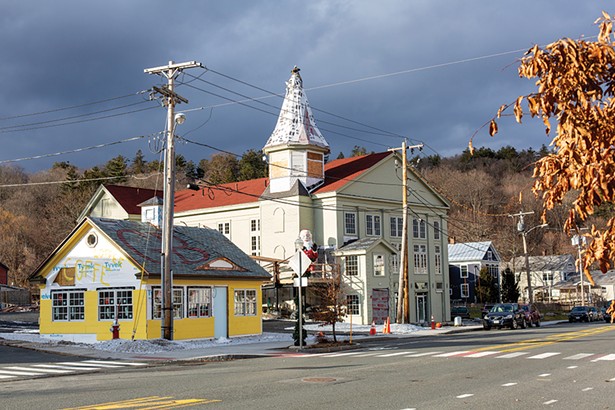 The most visible and perhaps most polarizing commercial construction project in town is the nearly complete "Flying Church." Developer and local resident Paul Joffe bought the abandoned United Methodist Church, a town historic landmark, jacked it over six feet in the air and remodeled it into an eye-catching mixed-use venue. The name "Flying Church," was originally used by the community as a pejorative, but Joffe embraced it and it's now the official name of the building. "It was really something, and people were concerned—and they'll tell you," Joffe says of the unusual project. "But now it looks nice and there's a lot of excitement. This is a really good time for Great Barrington, because we don't just have one season any more."

The Flying Church will soon house Zachary Sosne Design Studio, and the office of Evoque Investments, and a coffee shop is opening in a side building. The main floor of the church, 5,000 square feet space which Joffe says would be perfect for a restaurant or performance venue, is still available. There is talk that yet another marijuana dispensary is in the works for the Flying Church, but Joffe neither confirms nor denies the rumors. 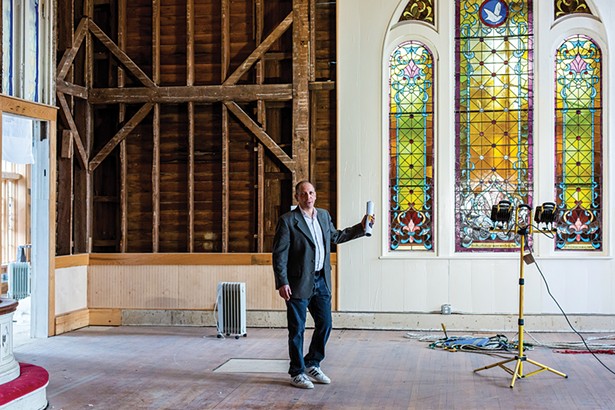 The appeal of Great Barrington to new, younger residents, eager to escape cities and work from home in the country, is self-evident. Popular restaurants like Prairie Whale, Cafe Adam, Bizen, and many more continue to innovate and impress diners. The clothing and wares sold in town are also of metropolitan quality—at shops like Hammertown, 1 Mercantile, GB9, Boho Exchange, and Asian art emporium Asia Barong. Entertainment venues attract new visitors as well, with professional and community performances of all types at the Mahaiwe Performing Arts Center and the Daniel Art Center at Bard College at Simon's Rock.

Also turning heads is the new bar, Moon Cloud. Run by Josh and Emily Irwin, owners of Cantina 229 in nearby Marlborough, Moon Cloud is offering something fresh—by serving things that aren't. Due to the lack of space for a commercial kitchen, all the dishes on the small plate menu are made with cured and preserved ingredients. It's high-style drinking food inspired by Josh Irwin's recent culinary research trip to Italy. 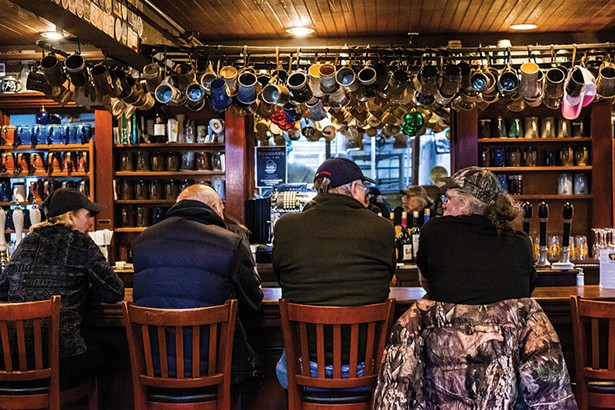 The bar is also putting out a vibrant cocktail program helmed by bartender Billy Paul, who is a Great Barrington native. Josh Irwin has put together a menu based on traditional salumi, cheeses, and preserved local vegetables. His goal is to soon serve only ingredients sourced from the Berkshires (excepting cheese). There are also plans to build the cocktail menu around seasonal local produce as well. "This baby is a true passion project for the three of us," says Irwin. "Everyone's got good taste these days, and young people especially want a place that's open late where you can go out to drink and have great food that goes with your drink. It's communal. It's the kind of place you can come in and ask Billy, 'What's good?' and have a new experience every night."

Another nearby small business that's seizing the moment and offering more is an old favorite, Gedney Farm in New Marlborough. A respected event space and wedding venue for many years, about a year ago Peter Miscokoski and Michael Smith bought the business and have revitalized the adjoining restaurant. Now the skilled staff, led by head chef Ryan McLaughlin, are bringing the expertise and style they offer event attendees in the more personal restaurant environment. 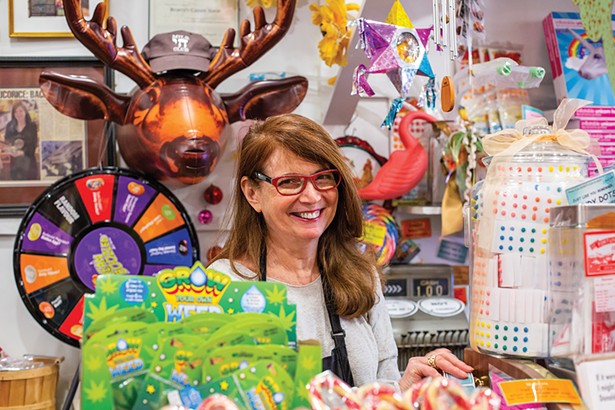 Despite offering some thrilling dishes, including seafood, oysters, a pizza night and internationally diverse prix fixe menus on winter weekend nights, The Gedney restaurant is still a bit of a local secret, as wedding bookings preclude the restaurant from being open on weekends three seasons a year. But winter is a perfect time to discover something delicious just off the beaten path, in a beautiful setting.

While construction and pot shops have been points of contention over the past few years, nothing has been as controversial as a recent plan by Suffolk Downs to revive the dedades dormant track at the fairgrounds outside or town. Suffolk Downs looked to take advantage of a new potential loophole in legislation governing the sport.

A bill filed in the State legislature in January 2019 inserts a sentence stating that, if the Massachusetts Racing or Gaming Commission had at any time in the past granted a license for commercial horse racing at a location, no further approval by the local selectboard is needed and residents would not be able to challenge through referendum.

Energized citizens filled the high school auditorium for a huge town selectboard meeting December 11, where the board voted unanimously to enact home rule. Home rule gives voters a say on whether or not horse racing and gambling will be able to return to Great Barrington.

Judging by the large and boisterous crowd at the meeting, signs seem to be pointing toward no horse racing. While a minority spoke in favor of how the track would revitalize the unused fairgrounds, many more, like Mark Rubiner, spoke passionately about how the specter of gambling's deleterious effects and the animal cruelty inherent in the sport run contrary to the values of Great Barrington's progressive spirit.

Rubiner, the founder and owner of Rubiner's Cheesemongers and Grocers and Rubi's Cafe in the center of Main Street since 2004, is a thoughtful spokesperson for the town's shifting character. "If there's one constant in this town, it's that it's always in flux," Rubiner says. "A lot of businesses left over the past few years, but just when you thought the town was on a downswing, things pick back up."

Rubiner says 2019 was his shop's best year ever. After 15 years of trying, he finally got a beer and wine license, but, other than that he says they've just tried to stick to their core offerings, offer the best quality products they can, and ride with Great Barrington through good times and bad.

While residents may be struggling to define their new cultural identity as Great Barrington evolves in real time, to outsiders all this activity reads as vitality and momentum. The town may have old bones, but there's a new energy.