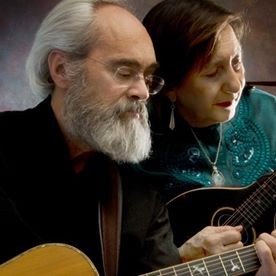 The 2016 and 2017 Dakota Access Pipeline protests brought awareness of the rights of Native Americans and the environmental threats to clean water at the hands of corporations to the world stage. And this month a bit of that awareness comes to another stage: the stage of music venue the Falcon, when its ongoing, Native American-themed Tribal Harmony series welcomes folk duo Magpie and singer-songwriter Joanne Shenandoah.

Curated by activist, author, and songwriter Evan Pritchard, Tribal Harmony, which grew out of Pritchard’s previous Standing Rock on Hudson series, is embracing the mantra “Water is Life!” for its August residency. Magpie, comprised of guitarist Greg Artzner and mandolinist Terry Leonino, has long links to the First Nations peoples and self-identifies as water protectors. The duo will appear at the club/eatery on August 23. A member of New York State’s Oneida Nation, Joanne Shenandoah, who will perform on August 27, won a Grammy Award for her contribution to the 2005 album Sacred Ground: A Tribute to Mother Earth.

Here, Magpie performs “I Stand Before the Morning Sun”:

Tribal Harmony presents Magpie on August 23 at 7pm and Joanne Shenandoah on August 27 at 7pm at the Falcon in Marlboro, New York. A donation is requested. For more information, call (845) 236-7970 or visit https://www.liveatthefalcon.com/.