In the past several years, a tide of creatives and professionals have relocated to Ellenville from New York City to start families or lower living costs or simply to get a view of the horizon. In 2019, artists Paul Villinski and Amy Park packed up their lives in Long Island City and joined the northbound current, moving full-time to their weekend house in Ellenville so that their son could attend High Meadow School.

“The problem was we didn't have a proper work space up here,” Villinski says. For a while, he went back and forth to his studio in Queens, which proved neither enjoyable nor sustainable. Finally, in January 2021, the couple was able to close on a retail storefront on Market Street in Ellenville that Villinski spent the last year renovating. “The building was really a mess,” Villinski says. “One of the themes in my work is taking cast-off and apparently worthless materials and transforming them into something with aesthetic value, so this building has been a large-scale expression of that.”


Located in the heart of the village with big, street-facing glass windows and perimeter lighting inside, the space offers a sort of drive-by studio visit, which is intentional—Villinski and Park are excited about bringing people in. When Villinski gets the studio up to code for public assembly, the space will have an occupancy of 140 people with movable walls, so the pair can host exhibitions with guest curators and solo shows for artist friends. Their 11-year-old son Lark has carved out a recording studio for himself in the back of the building to practice drums, bass, and electric guitar. “When the three of us are down there, all doing our own thing under the same roof, it’s really wonderful,” Villinski says.

A graduate of Cooper Union, Villinski spent the first 17 years of his artistic career as a painter. After getting sober at the age of 32, his art and his life underwent major changes. “I got more in touch with my actual roots as a person,” he says. “I realized that as a painter, I enjoyed building the wooden stretcher more than painting itself.” It was a sort of homecoming for Villinski, who had loved to fabricate things with tools as a child. Very much in the playful spirit of a kid who makes assemblages from bits and bobs uncovered around the house and in the yard, Villinski has made a name for himself over the last three decades with his found-object sculptures and site-specific installations.

Like an archetype of the inspired artist, Villinski’s ideas for new works come to him, as if by divine vision. “A lot of initial ideas arrive in my brian, like, ‘Oh, I could do that,’” he says. “I don’t know where those come from. I feel like a recipient from something outside myself.”


His most iconic works are a series of butterfly-themed constructions made from found aluminum cans collected by a group of homeless canners in Queens. These delicate, colorful, winged installations have alighted in galleries, private collections, and public spaces around the country—butterflies emerging from trumpets, breaking free from the two-dimensional confines of a frame, swirling into letters, spilling out of a flight suit, or simply moving en masse like a murmuration of starlings.

The airborne theme recurs often in Villinski’s work. He has created wireframe airplanes and flying bicycles and winged wheelchairs. An avid pilot of gliders and small planes, his sculptures defy gravity and capture a sense of weightless motion.


Butterflies, those famed masters of migration, delicate yet sturdy enough to endure an arduous journey, are also associated with another theme in Villinksi’s work: metamorphosis. “The very idea of transformation is central to my work,” he says. “It probably stems from the experience I underwent getting clean.”

Though he hasn't produced much work in the last year while renovating the studio, he is gearing up to return to that theme, again with help from his urban community of can collectors. “I also had them collect those little nip bottles,” he says. “I’ve got a massive collection of these things—almost 1,000 small booze bottles—that I’m going to start building things from.” As he heads into his 30th year of sobriety this spring, Villinski is looking forward to engaging a body of work that “confronts addiction and recovery head on.” He says, “It’s a really germane topic. There are 21 million Americans in recovery and probably an equal number that could be. It’s something that touches most people's lives, in one way or another.”


While Villinski’s works have a misty air of magical realism, his partner Amy Park tends to focus on the real world with her large-scale hyper-realistic watercolors, which often take architecture as their subject. 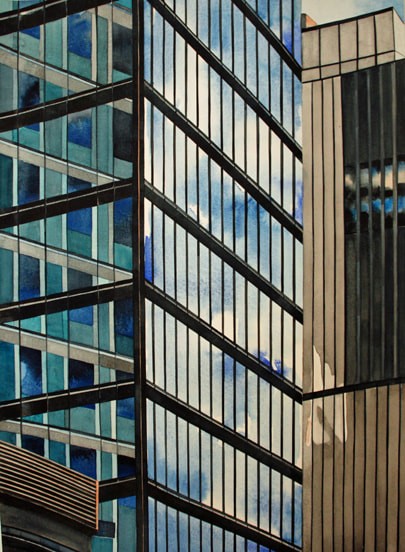 Park grew up in the lakeside Wisconsin city of Neenah. Though neither of her parents were professional artists, her mother was an avid sculptor and her father trained as an architect before his career at Kimberly-Clark. “We always went to art museums, we always went to galleries,” she recalls. “My dad was always pointing out architecture everywhere.”


Decades later, Park is still fascinated with the built environment. She has painted Mid-Century Modern houses in California and skyscrapers in Chicago. Her 2014 series 1200’ shows a view of Manhattan’s buildings as captured from a small plane piloted by Villinksi. “It’s called ‘1,200 Feet’ because that is the altitude you have to fly down the Hudson at—it’s a special use corridor only for small planes,” she says, “It’s pretty fascinating.” The paintings are breathtaking in scope—five feet high by 20 feet long—giving you the exhilarating, if vertiginous, sensation of peering out of the window of a small plane to behold the behemoth island in all its steel and glass glory.

In 2016, with a young child and an upcoming show in Los Angeles, Park found herself stuck for source material. “I couldn’t just go to LA and hangout and take pictures because I was a mom,” she says. “I didn’t have the time or the bandwidth.” So she turned to the books of pop artist Ed Ruscha. “I had the idea of working with Every Building on the Sunset Strip, because I had done a similar thing in New York,” she says referring to the 1200’ series.


The 1966 book, which folds out into a single, continuous 292-inch panorama, offers a scene-by-scene tour of a mile-and-a-half stretch of the iconic Sunset Boulevard, which Ruscha captured with a motorized Nikon camera mounted to the back of a pick-up truck. “I had used the same sort of method in creating the images that he did, only he was in a car, I was in a plane, he was doing California, I was doing New York,” Park says. “It felt very aligned with what I had been doing.”

Through a friend, she was able to get in touch with Ruscha’s studio manager, and within a day the artist had sent her the book to work with. “I had it for about a year,” she says, with a faint trace of bewilderment still detectable in her voice. “He’s amazing. He’s actually become a really incredible supporter of mine. He’s bought my paintings, he keeps letting me borrow books, he always goes and sees my shows.” The book loan resulted in a stunning installation 100 feet long that wraps around the gallery. In the years following, Park went on to paint covers of other Ruscha art books and, most recently, the full series from his 1967 book 34 Parking Lots in Los Angeles.


Now, with her son a bit older, Park feels ready to return to working from her own photographs. She is planning another series of Manhattan buildings, taken this time from the perspective of sea-level from the deck of a sailboat in the East River. “Paul is an air person. I am a sailor,” says Park, who grew up sailing on Lake Winnebago. “It’s a really incredible view to see the city and the island—Manhattan as an island, you sort of feel that, the weight of all of that. And there are reflections and trash going by on a barge. You're getting waked by a giant motor boat. It’s full of experiences.”

In the December 1965 issue of Atlantic Monthly, filmmaker Federico Fellini said, “All art is autobiographical; the pearl is the oyster's autobiography.” Working out of the same studio, Park and Villinski are creating divergent art from a shared story.


You can see the subtle thread of Park’s life story—her architecture-centric childhood through various moves and life stages like having a child, and hobbies like flying and sailing—woven throughout her work. Villinski’s practice harnesses the playfulness and ingenuity of his childhood in service of processing past hardship and struggle, in service of personal transformation and transcendence.


Together, the well-balanced pair hope to bring more arts education and programming to the village of Ellenville, something they did previously in Queens. Park already teaches watercolor to the students at High Meadow (she hopes to mount an exhibit of that work at the studio this spring), and the couple is in talks with Ellenville Central School District superintendent Lisa Wiles about mentoring high school students around portfolio preparation and art school applications. Villinski says, “We’re eager to start to work here in the Ellenville community. That’s one of the reasons we went for this building right in the center of the village.”