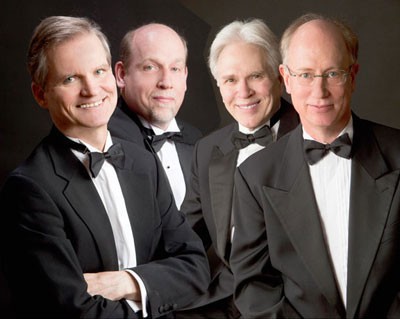 April 3. The Ulster Chamber Series, now in its 43rd year, presents the much-demanded return of the Manhattan String Quartet. Hailed as “a national treasure” by the Boston Globe, the 41-year-old MSQ has made its name largely through its stunning performances of 20th-century masters; its bar-raising adaptations of Shostakovich’s cycle of 15 string quartets remain the standard to which subsequent chamber outfits aspire. Comprised of violinists Eric Lewis and Calvin Wiersma, violist John Dexter, and cellist Chris Finckel, the foursome regularly plays to sold-out audiences in Europe and Japan. The series holds forth in the Church of the Holy Cross, a setting as acoustically grand as befits this esteemed group’s music. 3pm. $20, $15. Kingston. (845) 340-9434;
www.ulsterchambermusicseries.org.