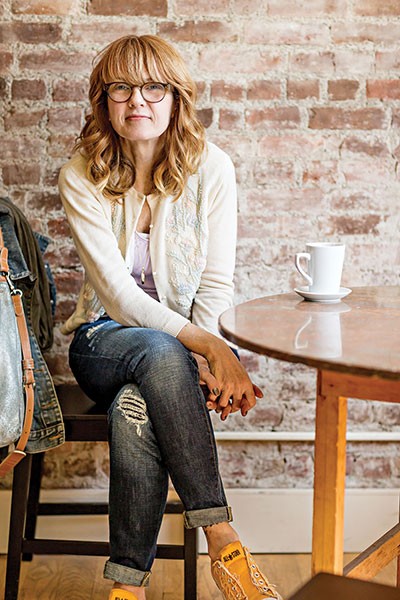 You're meeting Elizabeth Crane for the first time at Newburgh's Ms. Fairfax cafe. How will you know her?

By the cardigan, of course.

The acclaimed fiction writer has a jones for vintage cardigans: pearl-buttoned, beaded, floral, cashmere, lambswool, angora. "There was a point in Chicago about 20 years ago where a corner was turned," she says with a mordant laugh; she now owns more than 60. Today's model is ivory with vivid pink roses that bring out the strawberry blond in Crane's hair. You also spot an orange cotton jacket draped over her chair, and a cool silver purse.

You haven't met Ben, but you've been to his wedding, sort of. "Ben" and struggling writer Betsy Crane are characters in Crane's wig-flipping, just-published novel The History of Great Things (Harper Perennial, 2016). They get married twice in its pages, once in a dreamy beach ceremony and once in their backyard, with Betsy's dead mother inside the house, lobbing down comments from an upstairs window.

"I have a tendency to lean toward projects that are a little off-balance," Crane says cheerfully, digging into a smoked salmon crepe.

Nobody does off-balance better than Elizabeth Crane. She burst onto the scene with the widely praised story collection When the Messenger Is Hot (Little, Brown, 2003), followed by two more books of stories, This Heavenly Glory (Little, Brown, 2005) and You Must Be This Happy to Enter (Akashic, 2007), and a debut novel, We Only Know So Much (Harper, 2012). Crane has a penchant for creating smart, scrappy, emotionally disheveled, hilarious women on the verge of...well, something. Her characters often remind you of someone you know, or possibly someone you are.

The History of Great Things takes familiarity to the next level, spinning the tandem story of "Betsy Crane" and her mother Lois. Like Crane's real-life late mother, Lois Crane, the novel's Lois is an Iowa-born divorced opera singer of dizzying talent, charisma, and emotional turbulence. In a bravura feat of double-decker narration, daughter and mother tell each other's stories (often with surreal variations) in the second person, setting the rules, inventing the details of what could have happened, and arguing over what actually did:

—You don't think we should try to be accurate?

—It's not a true story, though. That's not what we're doing. Do you think you know my story?

—Yes. I don't know. Maybe. More than you think.

Besides exploring two singular lives—a willful, gifted woman who broke generational molds to pursue an artistic career, and a daughter both laid low and strengthened by her unconventional childhood—The History of Great Things is a potent exploration of fiction itself, of the myriad ways in which telling a story can transform What happened? into What if?

Plus it's funny as hell. And it hurts, in a good way. (Anyone with a mother will know what this means. It's impossible to read this novel without thinking about the woman who gave birth to you, whether or not you were "a giant bowling ball coming out of me. If bowling balls were square.")

"What interested me about doing it this way is that you start out with the known facts, the timeline, and see where it takes you, " says Crane. "What did my mother think of me? What did she think my life was?"

Family relationships are a sort of Venn diagram, with shared information where two people's lives overlap. But what happens outside those circles? Crane's mother knew only the bare bones of her daughter's college years; her Midwestern childhood and later love life were likewise outside of Crane's sphere of knowledge. "I stuck to really simplistic facts, and then created stories from there. I have no knowledge of my mother having an affair, but it's something that seems believable to me."

The real Lois Crane died at 63, when the real Betsy was still in her 30s. Crane wrote stories about her mother while she was alive, but the terrain was fraught. "She was larger than life, a very complex personality, and she was my mother," the author explains. "By the time she died, I came around to understanding that life must have been very hard for her. Really through writing this novel, even though I'm imagining things, I reached a new level of empathy. I think it's fair to say that her internal life was...." She pauses for some time, eyes searching. "It wasn't easy to be in her head."