On October 31, the House of Representatives voted to move into the next phase of the impeachment inquiry on President Trump. Since the anticlimactic Mueller Report was released in April, the impeachment question has loomed large in the minds of the masses. Malcolm Nance, an author and political advocate, attempts to make a case for impeachment with his forthcoming book, The Plot to Betray America: How Team Trump Embraced Our Enemies, Compromised Our Security, and How We Can Fix It.


Nance, who lives in Columbia County, is a famed international counterterrorism intelligence expert, a correspondent for NBC and MSNBC, and the author of nine books on Al-Qaeda, ISIS, and Trump-era politics. His expertise draws from 20 years’ experience as a cryptologist in the Navy working counterterrorism, intelligence, and combat operations. 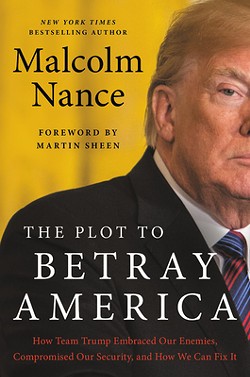 With his previous books, The Plot to Hack America: How Putin’s Cyberspies and WikiLeaks Tried to Steal the 2016 Election and The Plot To Destroy Democracy: How Putin's Spies Are Winning Control of America and Dismantling the West, Nance has been calling attention to the misconduct (both foreign and domestic) surrounding the 2016 elections, and subsequent lies and coverups. Kirkus Review calls Nance’s latest work “a convincing and alarming—and perhaps alarmist—cry that treason is afoot.”


The Plot To Betray America compiles Nance’s research and evidence on the Trump campaign’s collusion with Russia during the 2016 election—what he predicted that the Mueller Report would confirm upon its review. “In my new book, The Plot to Betray America, the second chapter is about Vladimir Putin. And you want to know what that chapter is? ‘Vladimir Putin: A Man with a Leash,’ and chapter 3 is ‘Donald Trump: A Man to be Walked,’’’ said Nance in an interview on The Stephanie Miller Show. Kirkus Review explains the book to be “Occasionally overwrought but right on the money in enumerating Trump’s high crimes and misdemeanors.”


The book drops November 12, but Nance will hold a conversation presenting his argument against President Trump and his team as part of a book launch party on November 10 at Helsinki Hudson, where he’ll discuss his views of how to “save America’s democracy, security and future.”


The book launch party will also serve as a fundraiser for the veterans’ farm apprenticeship and skill training program at Warrior's Haven Farmstead in Stockport, which Nance helped to develop. “We have a lot of troubled vets who face drug addiction and post traumatic stress disorder, who need a facility that puts them in an environment they understand—[one that is] structured, like the military,” Nance told HudsonValley360 article. The skills campus at Warrior’s Haven Farmstead trains veterans in sawmill and farm machinery operation, carpentry, construction, animal husbandry, and general farm management. Any expansion or renovations to the facilities are actually performed by the residents themselves using the skills they have honed.

The Plot to Betray America: How Team Trump Embraced Our Enemies, Compromised Our Security, and How We Can Fix It

The Good Fighter: Malcolm Nance on the Heels of His Latest Book