It's easy to miss the entrance to Newburgh's Thornwillow Press. Off an unmarked alley, the door opens into a former coat factory filled with antique printing equipment. There's a heady aroma of ink and cut paper, the staccato mechanical thump of cast-iron machines. In a corner office, two workers sit at more 21st-century workstations, using computers. One of two "press cats," Bembo, sits on a countertop licking a paw.

Thornwillow's ebullient, bespectacled president, Luke Ives Pontifell, offers a tour. A few of the many things made here: limited-edition collectible books, custom business cards, engraved invitations, Michelle Obama's envelopes for White House gifts. Thornwillow's mission, Pontifell says, is "to bridge the world of hand craftsmanship and technology. In an age where people turn books on and off with a switch, we make things that are meant to last, where the object itself is part of the relationship between author and reader."

Pontifell started publishing books at 16, on a Vandercook press he still owns. The oldest of Thornwillow's 32 working presses dates from 1890 ("Nothing breaks—there are no plastic parts"). He's especially fond of a hulking Carver Die Stamping Press that came from the Bureau of Printing and Engraving in Washington, where it was once printed WWII war bonds. There's also a series of intricate, Dr. Seuss-like machines that die-cut, fold, and line envelopes, and make boxes. "A lot of things fall into the sickness of collecting old equipment," Pontifell says with a schoolboy grin.

Indeed. There are printers' job cases stuffed with 19th-century wooden type and copper master plates of alphabets in designers' own calligraphy; last summer, an artist-in-residence started digitizing these unique typefaces.

Copperplate engraving is still used for diplomas, fine stationery, wedding invitations, and "other things people will keep." Where letterpress printing punches an imprint into the paper's surface, engraving embosses the paper from behind, so the letters stand up from the page. The text is etched onto photosensitive copper, using the same chemical process as an artist's aquatint. "It's basically controlled rust," says Pontifell.

A Heidelberg Cylinder press churns out uncut pages. At a sorting table, two workers assemble signatures of the forthcoming book White House Cookies, by Washington pastry chef Roland Mesnies. Pontifell introduces head of production Sergio Salazar, who's worked in this building for 30 years, starting on the floor of the coat factory. When the building was sold to Thornwillow eleven years ago, Salazar did custodial work as he learned the printing trade. Now he oversees 15 local employees.

Pontifell lays a proud hand on the Vandercook on which he printed his first book, Barbara England's Hello Sun. The next, An August to Remember,was by family friend William Shirer, with a cover illustration by Pontifell's mother, artist Irena Markus. She and his late father, a writer and advertising executive, named their lovingly restored antique Berkshires farmhouse Thornwillow.

As a student at Harvard, Pontifell solicited manuscripts from a different author each year. His history professor Arthur Schlesinger and journalist Walter Cronkite were among those who said yes. "By senior year, I had people working for me in my dorm room. By graduation, my hobby had become a little business."

Pontifell went on to design printed materials for the Montblanc pen company, importing paper from the Czech Republic, eventually moving to Prague. He spent 14 years custom printing for such high-end clients as Cartier, Crane's, and Ralph Lauren. At one point, his company was the world's largest producer of handmade paper, with 60 employees. "I was following great makers to the ends of the earth," he says, noting that traditional crafts like leather bookbinding flourished under Communist rule.

But so did corruption. Pontifell's empire was "wiped out" by a crooked Czech manager. "The irony is that the disaster became a catalyst for what we should have done by choice. Instead of following the craftspeople, we ended up consolidating all these artisanal crafts related to the written word under one roof."

Pontifell's wife Savine found Thornwillow's new home, drawing a circle in a one-hour radius from Manhattan. The vast Newburgh plant makes "under one roof" literal: Where most publishers do their printing in one plant and ship books out for binding, Thornwillow's bindery is right upstairs.

In the loftlike space, a woman handtools leather covers. A man glues the spine of another book, stitched on a nearby Smyth sewing machine. The work here is patient and slow, using gilding tools, house-made marbled papers, and imported Nigerian goat- and calfskins. There are stacks of wrapped books on industrial shelves; glass-front cases display some of the press's most elegant volumes. Pontifell takes out James Merrill's Last Poems (1998). Bound in Morocco leather and paste paper with a hand-printed photogravure by Mariana Cook, in an edition of 185, it lists for $1,500. 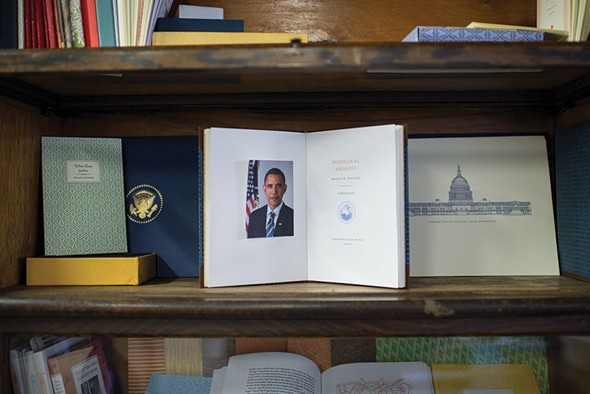 And for the next 30 years? Pontifell envisions "four legs," like a well-balanced table. The first two, Thornwillow Press and Thornwillow Makers ("all the nonpublished things we make"—custom stationery, business cards, and gift items like fine-paper journals), are already thriving. He's poised to launch the Thornwillow Institute, a not-for-profit entity to teach master classes in traditional book arts to writers and artists, and to offer job training "which Newburgh so desperately needs." He's also purchased two neighboring warehouses, which he hopes to convert into "Thornwillow Village," with artist housing, exhibition spaces, and other book-related and artisanal businesses.

The Hudson Valley already boasts a vigorous book arts community, with Rosendale's Women's Studio Workshop at its hub. The internationally renowned facility offers artist residencies, internships, classes, studio space rentals, and sales of handmade artists books. Founded in 1974 by Executive Director Ann Kalmbach, Tatana Kellner, Anita Wetzel, and Barbara Leoff Burge, WSW has studios for etching, letterpress, papermaking, book arts, photography, silkscreen, 3D, and ceramics; a major expansion is under way, with 8,000 square feet to be added in stages. WSW artists have produced more than 200 limited-edition books in a wide variety of formats and media; like Thornwillow's, its archive has been acquired by Vassar.

Acclaimed book artist Maureen Cummins, whose work was recently featured at the Samuel Dorsky Museum of Art and in shows with Kiki Smith, Fred Tomaselli, and Kara Walker, moved from Brooklyn to the Hudson Valley after the first of three residencies at Women's Studio Workshop. "They seduced me," she says with a laugh. "It's just an amazing place, and it's right in our backyard."

Bill Roberts's Bottle of Smoke Press is literally in his backyard. Housed in a modest suburban garage, the impressively DIY Wallkill press prints and publishes literary works by such authors as Gerard Malanga, Rebecca Schumejda, Jack Kerouac, and Charles Plymell on a vintage Vandercook press. Many books are released in multiple editions, from elaborately slipcased collectibles to modestly priced paperbacks. "I'm not the 1 percent, so I don't want to bind for the 1 percent," says Roberts, who often sews chapbooks on the kitchen table while his kids draw.

What all these presses share is a tactile attention to detail and aesthetics. "Craftsmanship is coming back," asserts Pontifell. "In the 1800s, people were in a panic about urbanization. In the 1900s, it was industrialization; now it's technology. There's always a return to craft, a desperate grab for humanity."

But the new craftsmanship isn't a blinkered return to old ways. At its best, it can bridge 21st-century technology and traditional skills. "You can log on to our website late at night in your pajamas and custom order something that's made by hand," says Luke Ives Pontifell. "It's all about saying, 'This matters.' The human hand matters."

WHERE THE BOOKS ARE: SELECTED HUDSON VALLEY RESOURCES