Meeting of the Minds 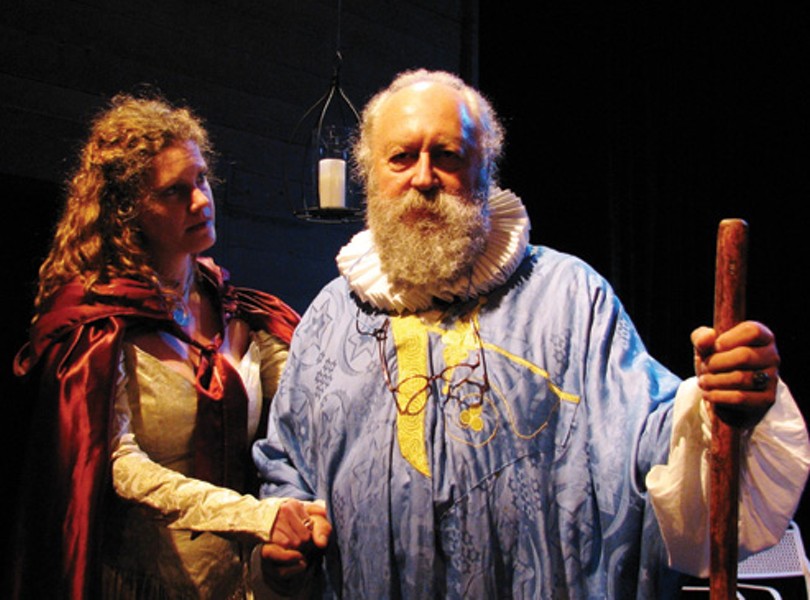 Kris Lundberg and Carey Harrison as Jane and John Dee in "Magus," which will be staged this month at the Center for Performing Arts in Rhinebeck.

What if William Shakespeare had been killed before he was able to write his masterpieces? What if it was at the hands of another famous writer, born over 300 years later? "Magus," the the most recent play by novelist, director, and dramatist Carey Harrison, considers what might have happened if some of the most famous names in writing, history, and magic were to meet in 16th-century Prague. "Magus" explores the power of illusion, boundaries of reality, and the interchanging of time and space.

The Manhattan Theatre Company commissioned Harrison to write a companion piece for a play the company was staging about Rudolf II of Bohemia. Harrison was presented with two stipulations: Use the same costumes and actors as the Manhattan Theatre Company's play, and set the play in 1580s Prague, during the reign of Rudolf II. And then Harrison's imagination ran wild. "A play set in Prague must somehow, I felt, feature Franz Kafka," says Harrison.

Historical bits about the character's lives permeate the surrealist play, creating a mishmash of fiction and fact. In "Magus," Kafka and his sister, Ottla enter a folie a deux (French for "a madness shared by two"). Ottla has fallen so deep into the delusion that she is the queen of 16th-century Prague, that Kafka must enter the dream too, in order to save her, and bring her back to the 20th century.

With "Magus" as well as many other works, Harrison takes classic historical and literary figures and satirizes and dramatizes them. Though the play employs familiar names—Freud and Cervantes make appearances—no one is as they seem, or as we know them. Each character, we find, is in Bohemia to fulfill a secret agenda, from finding a lost love to seeking revenge.

Harrison not only directs but also stars as John Dee, magician and former consultant to Queen Elizabeth I. Dee is in exile, trying to manufacture gold for Rudolf II. As events unfold in Bohemia and true identities are revealed, we learn that Dee is not just an alchemist but also an incarnation of Sigmund Freud. "In 'Magus', I get to play Freud, which for me is ultimate fulfillment," Harrison says.

"Magus" is Harrison's 35th play for the stage. "I began as a realist, focusing on family dramas, as the Greeks did," Harrison explains. In addition to plays for the stage, he has written a number of plays for television. It wasn't until about 30 years into his career that Harrison started to experiment with surrealism in his playwriting.

The son of screen legend Rex Harrison and actress Lilli Palmer, Harrison was surrounded by the stage and the written word growing up. "You do learn from watching, and absorbing the presence, as much as the practices, of others," Harrison remarks. Palmer, in addition to acting, was a bestselling novelist, as was his stepfather, Carlos Thompson. To this, Harrison credits his inclination for writing. "When writing, I can work 14 hours at a stretch, forgetting food and water. Words put me into a trance," Harrison says.

The play, however, nearly fell apart. The Manhattan Theatre Company was unable to bring the play to Woodstock's Byrdcliffe Theater as originally planned. So, with borrowed costumes, Harrison sought out local actors and formed his own company to perform "Magus". The play was staged last June at the Byrdcliffe Theater. The success of "Magus" prompted the Center for Performing Arts at Rhinebeck to invite Harrison to bring the production to Rhinebeck this month.

"I suppose the play says that dreams, no matter how little rooted in reality, can heal and even save us," says Harrison.

"Magus" will be staged at The Center for Performing Arts at Rhinebeck, February 4 through February 6. Friday and Saturday shows: 8pm, Sunday matinees: 3pm. (845) 876-3080; www.centerforperformingarts.org.

On the Cover: Julia Whitney Barnes

On the Cover: Georges Malkine