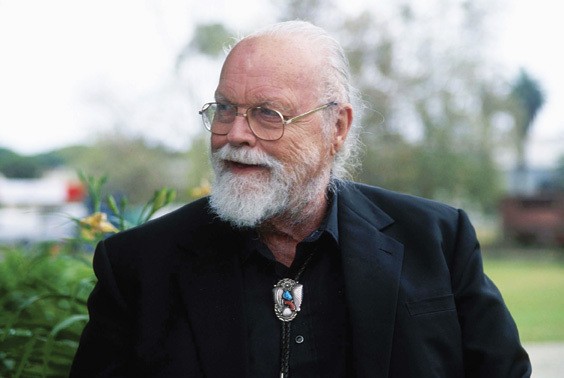 Lou Harrison (1917-2003) was an outsider original if ever there was. A pioneer in the writing of modern, purely percussive music, he composed beguiling works that draw heavily on early music and Native American and Asian styles and emphasize melody and rhythm, and often avoid harmony altogether. An outspoken pacifist and gay rights advocate, Harrison lived a maverick life mirrored by his inventive and endlessly surprising opuses, three of which will be performed on October 15 at Bard College in a program co-sponsored by New Albion Records and succinctly titled “Works by Lou Harrison.”

Harrison was born in Portland, Oregon, and as a child moved with his family to the San Francisco Bay Area, where he was exposed to such major and diverse influences as classical music, jazz, Cantonese opera, Gregorian chant, and Native American, Mexican, and Indonesian music. After taking proto-world music trailblazer Henry Cowell’s “Music of the Peoples of the World” course, he enrolled in the University of California at Los Angeles’s dance department as a dancer and accompanist. At UCLA he also studied under Arnold Schoenberg, which sparked an interest in the Viennese icon’s pivotal 12-tone technique.

This period, however, soon also saw Harrison move away from traditional notation and begin composing extended works utilizing mainly found percussive objects, such as car brake drums. Although Harrison was an early practitioner of this approach, he wasn’t alone: John Cage was also writing similar pieces, and the two often worked together. In 1943 Harrison relocated to New York, where he worked as a critic for the Herald Tribune and befriended Charles Ives, whose then largely ignored work he championed; he even conducted the premiere of Ives’s Symphony No. 3. An out-front booster of Edgard Varèse, Carl Ruggles, and other cutting-edge American composers, Harrison took a teaching position at North Carolina’s Black Mountain College, but after suffering a nervous breakdown moved back to California.

To support himself Harrison worked as a record salesman, a florist, an animal nurse, and a forest firefighter, and it was in his later California years that he began writing in the Balinese- and Javanese-influenced gamelan style for which he’s perhaps best known. With his partner of 33 years, William Colvig, he fabricated instruments such as the “American gamelan,” a tuned percussion ensemble using resonated aluminum keys and tubes, oxygen tanks, and other “junk” percussion devices. After another composer-mentor, Virgil Thomson, gave him a copy of Harry Partch’s influential book on tuning, Genesis of a Music, Harrison entered into another fecund period, which saw him composing music in just intonation—intervals of notes related by small whole numbers—rather than the prevailing equal temperament. In the 1960s Harrison became a composer-in-residence at San Jose State University and wrote and performed music for guzheng (Chinese zither). He and Colvig built and lived in a straw-bale house in the California desert until Harrison suffered a fatal heart attack en route to a concert of his music in Ohio.

“Works by Lou Harrison” presents Solo to Anthony Cirone, a work for tenor bells; Suite for Violin and American Gamelan; and La Koro Sutro, for large-scale chorus, gamelan, harp, and organ. The concert will take place on October 15 at 8pm in the Fisher Center’s Sosnoff Hall on Bard College’s Annandale-on-Hudson campus. Tickets are $15-45.