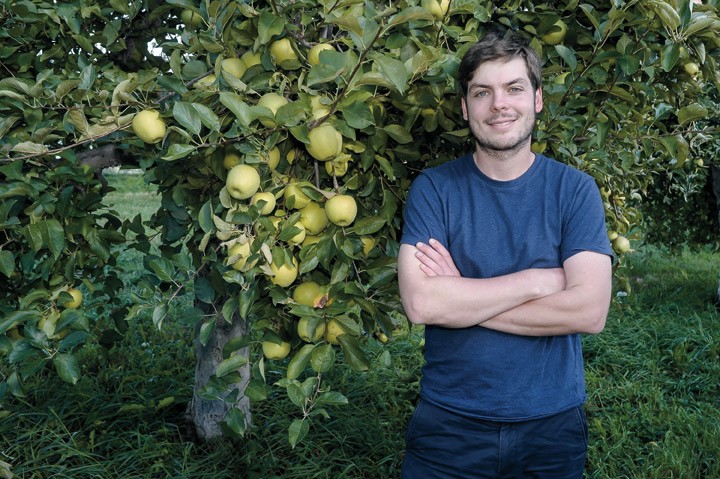 Josh Morgenthau, general manager and part owner of Fishkill Farms in Hopewell Junction, admits that majoring in painting and Fine Art at Yale University is far from conventional training for a farmer. However, he says his background in art has served him well in his chosen profession. “In same ways farming and painting are opposite ends of the spectrum, but in a lot of ways caring for and maintaining this ever changing project that is a farm has a lot of similarities to a work of art,” says Morgenthau, who is 28-years-old. He adds, “I didn’t have academic agriculture training but I think learning to think creatively has definitely served me well.”

Fishkill Farm is 270-acre farm with about 150 acres that are actively farmed. The farm’s specialty is apples and it has 60 acres of apple trees. In addition the farm has 20 acres devoted to a combination of peaches, nectarines, plums, and cherries. The farm also devotes 30 acres to vegetable growing and has some livestock, including more than a thousand pasture raised hens that produce fresh eggs. The farm also sells farm-made apple cider and famous apple cider doughnuts. The farm’s products are sold through CSAs, at the farm stand at the farm, and through local and New York City farmers’ markets.

Through mid-October the farm offers apple picking and hosts Fall harvest festivals each weekend. “We do hayrides, we have apple picking, we have live music on some of the days and other entertainment,” Morgenthau says. “We have a hay maze and a bouncy house for the kids. It’s really festive, it’s a great time of year to be outdoors.”

Fishkill Farm’s was opened by Josh Morgenthau’s grandfather, Henry Morgenthau Jr., in 1913. One early visitor to the farm was Franklin Delano Roosevelt, whose estate was located nearby. Roosevelt and Morgenthau Jr. became friends. When Roosevelt became governor of New York he appointed Henry Morgenthau chair of the New York State Agricultural Advisory Committee and also to the state Conservation Commission. When Roosevelt became president, he appointed Morgenthau as US Secretary of the Treasury. As Secretary of the Treasury, Morgenthau played a role in helping to shape Roosevelt’s New Deal policies. Morgenthau was also one of only a few Allied officials to advocate for Jewish refugees during World War II.

Josh Morgenthau recalls with regret how over the years parts of the farm his grandfather started were sold. “There were over a thousand acres when my grandfather started it and it was split between my father and his two siblings. My father was the only one to keep his portion running as a farm,” says Morgenthau.

Watching other farms in the area and a large portion of his family’s farm disappear inspired Josh Morgenthau to do what he could to preserve the land after he graduated from college. “The urge to preserve the farm and the land and to do something with it positive was my primary motivation,” he says. “I think food and agriculture is one of the biggest, and often less appreciated, issues of our time.”

Working on a farm my be a world away from painting, but Morgenthau could not be happier with his career choice. He says the best part of his job is “the appeal of the land and keeping the land open and making it into a productive source of healthy food.” He adds, “There is this constant struggle and collaboration with nature to produce food—there are elements of it that are scientific, and elements of it that are creative, and I think both are exciting.”
Fishkillfarms.com

Top Five on Friday: Things to Do with Dad