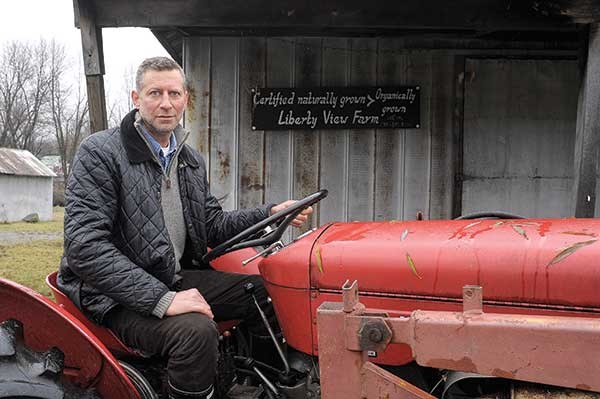 Some people just attract friends, and Billiam van Roestenberg has a lot of them—he maxed out at 5,000 on Facebook. Tall, charming, and charismatic, he came to prominence in 2004 as one half of the first same-sex couple to be married in New York State by New Paltz Mayor Jason West. He is a community farm activist, maintaining one of the few organic apple orchards in New York State, which was nominated for the "Top Ten Apple Picking Farms in America" in Travel + Leisure magazine.

Van Roestenberg began living in the Hudson Valley in 1998 part time and, struck by the beauty of the land and the people here, decided to buy a farm in Highland. Within a year he was running Liberty View Farm full time.

The farm needed a lot of work. The house required electric, water, heating, and interior renovations throughout. Outside, a new driveway, white picket fences, and many gardens were laid out, as well as underground watering systems, drainage systems, and electric throughout the property. At the same time, he began to acquire rare, heirloom chickens, goats, sheep, turkeys, and even some pigs.

"I was learning as I went, and the more I learned, the more I wanted to share all the knowledge—eating healthy and being happy. So I started an e-mail newsletter on eating healthy with yummy recipes, buying local, and the importance of community—being politically active to fight for a cleaner better community and environment." Now, over 35,000 people receive the newsletter, Cultivating Community.

"I quickly became involved with my community because I became aware that there were important causes that needed attention. I noticed a lot of people were not connected or using their voice to keep things beautiful or to improve our lives in big ways and small. So I did what I could." Soon, he was on the Zoning Board of Appeals and vice chair of the local Democratic Committee.

Van Roestenberg has been an activist since he turned 18 and had to sign up for the draft. "I was signing a contract with my country to lose life and limb to defend equality for all, yet my country did not support people like me."

He met Jason West, who became New Paltz's mayor in 2000. "For years I was plotting to end 'Gay Apartheid' and this was the ticket! After the New Paltz 2004 weddings, I felt obliged to use my contacts and further spread good and important news and information."

He is constantly expanding his newsletter and is kicking off the new blog Liberty View Magazine to promote Hudson Valley news and information and to cross pollinate with other news organizations and bloggers to come together and have a larger voice.

"I want my farm to succeed so I have branched out," says van Roestenberg. "It's not a good idea to keep all your eggs in one basket, especially with climate change. I notice trends and like to be ahead of the curve." He has ramped up Ag-tourism, giving more classes and tours of the farm, opening the farm to people who might like to spend a night or two there. And one of his best profit centers over the past few yeas has been hosting weddings. Like everything else he does on the farm, attention to detail rules supreme and couples are treated with white gloves. Van Roestenberg is working with other farmers to help them develop their properties into Ag-tourism sites, using the success of Liberty View as a model.

On the horizon, LVF will kick off the Ulster County Sunflower Project in 2013. "We all plant sunflowers, working with fellow farmers on the Hudson Valley Tea Consortium." He's also sharing his passion for sailing by showing people how to buy a sailboat together and sail the Hudson River. "It's very sustainable and actually affordable! It's a beautiful hobby that lets you enjoy the scenery and does not harm the environment. I bought a boat with some friends and joined the beautiful Poughkeepsie Yacht Club in Hyde Park, and I'm planning on working more closely with Riverkeeper."