Local Motion: A New Dance Center in the Accord Train Depot 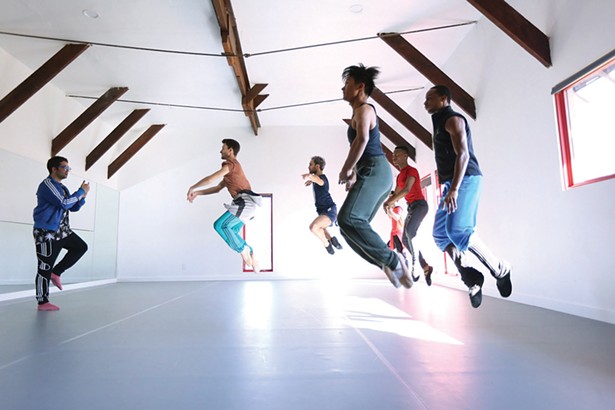 Although renowned Broadway choreographer Chase Brock and his musician husband Rob Berman had long been enamored of Accord's turn-of-the-century train depot, when it went on the market in 2017 they hadn't planned on buying it. "Like all artists do whenever they see an old building, we'd thought, 'I wonder if there's enough space in there to make into a studio'," says Brock about the historic structure, which the couple recently remade into a dance studio/residential retreat and B&B called Modern Accord Depot.

"We'd always liked the look of the building from the outside. When we saw it was for sale, we figured, 'Well, we should at least go and take a peek.' Once we did, that was it. We weren't exactly ready to buy another place and take on a renovation project, but we knew we had to do it."

Then again, the pair weren't planning to buy a home in the hamlet of just over 500 before they did exactly that in 2010. "We had that dream of getting out of the city and getting a place upstate [the couple has held onto their Brooklyn apartment], but we figured it would be 10 years before we did anything like that," the dancer recalls. "We had a friend who'd just closed on a place in Accord, and he told us there was another house for sale that we should really come see. We just came up on a lark, and the place was fabulous. We put in an offer two days later and we got it."

Raised in North Carolina, Brock made his Great White Way debut at age 16 and has gone on to become one of the scene's most prolific choreographers, directing concert dance, theater, ballet, opera, TV, and video game dance productions. His resume includes Broadway's "Spider Man: Turn Off the Dark" and "Picnic"; the stage adaptation of Disney's "The Hunchback of Notre Dame"; and TV's "Late Night with David Letterman" and "Last Week Tonight with John Oliver"; he's also the subject of the Emmy-nominated 2013 documentary Chasing Dance. At 23, he launched his own dance company, the Chase Brock Experience, whose residencies at Modern Accord Depot are set to alternate with those of visiting dance troupes and weekending B&B guests.

For the remodel, Brock and Berman turned to Kerhonkson architect Marica McKeel's Studio MM firm, which balanced their goals of making the space suitable for dancers and other artists and maintaining the 1902 building's historic character—while also adding just enough of Brock's colorful flair.

Last month, in solidarity with the Black Lives Matter movement, the facility began a partnership with arts organization New Dance Alliance on the latter's Black Artists Space to Create Residency program, which has provided three recipient dancers with the opportunity to live and work at the Accord site for two weeks. In a case of cosmic coincidence, Brock learned during the depot's renovations that the legendary local Black dance figure Peg Leg Bates had once performed in the building.

"We definitely took that as a sign from the universe," Brock says. "This convergence of, not just local history and Black history, but of dance history and this whole parallel of the movement of trains and travel with the movement of dance. It feels really good to be honoring all of that."