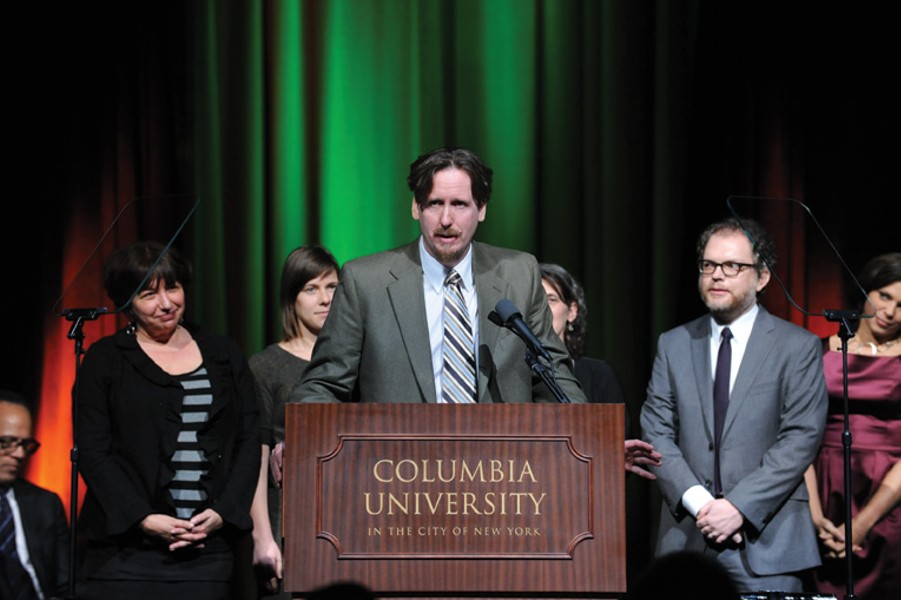 Diane Bondaref Trey Kay, receiving the honorary DuPont-Columbia University Award.
In 1974 Kanawha County, West Virginia, burst onto the national news when newly adopted multicultural textbooks kicked up a firestorm of controversy that many view as the first battleground in the contemporary culture wars. The community was divided over the question of whether books advocating values that were not neccesarily in line with the beliefs of the students’ parents should be taught in public schools. The ensuing protests eventually turned violent, with school buildings dynamited, snipers shooting at school buses, journalists beaten, coal mines shut down, and a minister sent to jail for three years for inciting others to violence.

Trey Kay, a local radio journalist, returned to his hometown in West Virginia in 2008 to revisit the controversy. “The Great Textbook War,” an hour-long documentary Kay produced with Deborah George uses archival audio from community board hearings as well as interviews with key figures to explore the volatile issue. The documentary, which originally aired on West Virginia Public Radio, was awarded the prestigious Alfred I. DuPont-Columbia University Award, considered the Pulitzer Prize of broadcast news.

Here's a link to the full audio of "The Great Textbook War" on American Radioworks.

Set the context for what happened in West Virginia in 1974.
It’s six years after the RFK and MLK assassinations, in a way we were still involved with the civil rights movement, the Vietnam War is winding down, a lot of people in West Virginia were part of Richard Nixon’s Silent Majority—socially conservative, labor union Democrats. They did not see themselves in Eugene McCarthy or George McGovern. This protest marked a shift for a great deal of them. A lot of the preachers who led the protest were Democrats. They’re not now, but they were then.

How old were you in ‘74? What do you remember from that time?
I was 12. One morning my bus goes through the gate of the school and there are these women standing there with protest signs that say things like “Get the devil books out of the schools.” And then a bit later the books were taken out of the schools. They had already assigned us books, and then they took them away.

How did the “Great Textbook War” begin?
The opening shot was when [Kanawha County School Board member] Alice Moore’s husband showed her books that she had just voted to adopt but she hadn’t had a chance to look at yet. He pointed to a Malcolm X quote: “All praise is due to Allah that I left Boston when I did, because had I not, I’d probably still be a brainwashed black Christian.”

What were some of the books people protested against?
At the upper level, there were things like Eldrige Cleaver’s Soul on Ice. As far as literature, the things that were objected to by the protesters would have been anything that would have been considered anti-American, unpatriotic, they objected to things that would have been considered anti-religious, in particular anti-Christian. Questioning authority was another big issue, for instance stories where the parents might have been thought of as foolish.
Norman Mailer was also someone cited. Norman Mailer was objected to not so much for what he wrote, but because he himself was an objectionable person.
The protestors also felt that their Christian faith was being presented as just another world myth. For example, there was a lesson where the kids read the Androcles and the Lion story. No one had a problem with that, but the problem arose when the protestors saw the teacher’s edition. The discussion questions were along the lines of: “Ask the children if they know any other stories that are kind of like this one,” and the Bible story of Daniel in the Lion’s Den is suggested. So now all of a sudden we’re taking the story from God’s word and comparing it to Aesop’s fable, a myth. That was a big problem.

So the protest community felt as though there was an outside influence at work undermining their parental authority.
That was another big thing— they didn’t want their authority at home questioned. And the fact that school, which is controlled by the government, is coming in and superceding what they believed to be the values they wanted to teach their children—it all came down to values really—they didn’t want the school system or the government being the ones setting what the values were to be.

What was the most surprising thing you learned as you reported the story?
I came from the wealthier, more affluent part of the county, and most of the people from that side of the tracks supported the textbooks. When I spoke to the people who were against the books, and I told them that I now live in New York, and told them that this story is probably going to end up on an NPR station, I could see the walls go up, don’t trust him, he’s from the liberal media elite—all those things were going to make it difficult for me speak to these people. But that wasn’t the case at all—some of the people that to this day are still very pro-creationism, keep-evolution-out-of-the-schools people helped me get key information. They were incredibly helpful, incredibly gracious. The flip side: There were people who were from my side of the tracks who were not as cooperative. And in some cases I think they had good reason not to be cooperative. For example, there was a woman who had worked for the School Board and she had been part of choosing the textbooks, and she was kind of a shy, quiet woman; she was 85 when I was trying to reach her. I just about got her to sit down for an interview when she said, “I haven’t had a good night sleep since you called the last time.” She was afraid. Maybe it wasn’t a fear of physical harm, but just that this event was so upsetting for her that going back and reliving it with me was just more than she was up for.

This is something that happened almost 40 years ago, what’s the relevance today?
It’s important for several reasons. I think that part of the reason this documentary took off and had a national impact is that the culture wars are still going on. The battle lines are drawn: red state versus blue state. We even have that up here, upstate versus downstate in New York. We are still fighting those battles.
The nascent Heritage Foundation sent lawyers and representatives to Kanawha County when the controversy broke. They saw what was happening there as kind of a grassroots movement over conservative values issues. They used it to talk about and lecture on, for communities across the nation who saw this thing that was happening in West Virginia and went “We don’t need to be dictated to, we’re going to stand up and fight like those Kanawha County protesters!” This event played a role in the rise of the Right. It is a stone on the path to the Moral Majority and the presidency of Ronald Reagan six years later.