Rhinebeck’s Sinterklaas Festival is one of a host of mesmerizing events that celebration artist Jeanne Fleming conceives and directs through her company Wonderworks. Daughter of a funeral director, she snuck at 12 to an Elvis Presley concert at the Philadelphia Arena. Sitting so high in the balcony that Elvis was the size of a sequin, Jeanne says she experienced the realization that night that she has the ability to “see” an entire event instantly and in all its details. At 17, she arrived at Bard College as a faculty wife, majored in medieval studies, and segued into creating large outdoor theater pieces and pageants. Then, at 25, she received a grant from the National Endowment for the Arts and used it to create the nation’s first regional cooperative arts program, in the Hudson Valley.  A beloved grassroots organizer, she builds her acclaimed celebrations on a wealth of historical and literary research, and is considered one of the most accomplished celebration artists in the world.

For 30 years, Fleming, a blend of glee and calm, and sporting her signature bright pink jacket, has led NYC’s Village Halloween Parade of 60,000 participants, with 2 million spectators lining Sixth Avenue. Prior to the event, she answers all e-mails she receives about it, “keeping the parade safe, holding the center, holding the energy, and solving any problems intuitively,” she says. At this year’s parade, Fleming turned her attention toward recent earthquake victims by spotlighting Haitian carnival artist Didier Civil’s giant skeleton puppets, and by encouraging online donations to rebuild the flattened arts school in his hometown, Jacmel.

In Rhinebeck, she has transformed the ancient Dutch heritage festival of St. Nicholas into a vibrant new myth. Men dressed as Gumpuses and colorful wild women with massive amounts of curly hair dance throughout the village under stunningly lit Early American architecture, and amidst artwork created by Rhinebeck seniors and high school seniors! In process from 10 am to midnight on Saturday, December 4, the Sinterklaas music-art-cultural celebration builds in the evening to the Children’s Starlight Parade. Here the entire village honors the children’s hopes and wishes, and, ultimately, the Peace Dove.

I spoke with Jeanne Fleming at her home at Rokeby in Barrytown and at the Halloween Parade in Manhattan. www.sinterklaasrhinebeck.com

Describe the greatly anticipated Sinterklaas Festival in Rhinebeck and why this town seems the perfect location for it.
It’s very unusual to do an event where the whole town gets involved; that’s why it works. I particularly wanted to reach out to the Hispanic and East Indian communities here. It’s much easier for people of other cultures to understand the event because they have many community celebrations where they came from: The lights go on in their eyes. We’re all in one place under the stars all together, including the weekenders! We turn judgment upside down and honor the children and their wishes for the future, instead of talking about who was naughty and nice. It’s about the coming of light and hope in this time of winter. In ancient times, the “bad” children got switched; here, the switches become a symbol of strength that the children carry with three wishes in them. They get away from what they want for themselves and focus on what they want for their family, community, and world. Rhinebeck is a great petrie dish, in a physically beautiful setting, old as America itself. Everyone can accept the Dutch holiday Sinterklaas because it’s not religious. This is about Rhinebeck’s deepest roots. Meeting at the Beekman Arms for a cup of grog at the end of Sinterklaas, we are doing what people did here hundreds of years ago; we’re walking in our ancestors’ footsteps; it’s authentic.

During the Village Halloween Parade, how do you manage a mammoth event involving millions and still have the time and energy to celebrate yourself?
Six key people who have held their positions for at least 15 years and 4,000 police make it all possible. The New York City police are great; they are assigned to work the parade, but they like it, have a lot of fun, and come in to work from the outer boroughs, even though we’ve never needed them. It’s a happy festival crowd. By the end, 2 million people own the parade. If everyone’s doing their job, I enjoy it, lead the parade, make sure it gets to the TV broadcasters set up halfway through it, and then go to the end of the parade, where I dance with the band. I took over in 1980 from Ralph Lee, who ran the parade for eight years. [It’s about] what goes on in the heads of people and how they transform themselves with a connection to spirit, in the most modern city in the world. If the choice is to sit back or dance, why not dance with purpose, to create magic—doing the hokeypokey, putting your whole self in, you become another character, forget who you are, with a sense of feeling truly alive in the present moment. In disguise, boundaries go down; people are most essentially themselves, entertaining and enjoying one another.

Sinterklaas and Halloween are both related to ancient holidays. Is your celebration art aimed at lifting communities to a higher spiritual level?
All my work is spiritual, bringing the community together around old stories. I have done events with all religions in one way or another. The stories command the heart and soul and spirit, bringing people together creatively, making something larger than yourself.

You have produced so many celebrations throughout  NY and the world, including NYC’s Harbor Festival ’86 for the Statue of Liberty Centennial  and “Walking on Air” for the grand opening of the Walkway over the Hudson during the 2009 Quad Celebration.  Which event is most etched in your memory?
The first Halloween parade after 9/11. Giuliani went forward with it, wanted to show the world we were still around, dancing in the face of death. You could hear a pin drop. The theme was “Phoenix Rising,” with a huge puppet developed by Rokeby’s Sophia Michahelles. One of the greatest moments of my life was when the band played “New York, New York” like a dirge. The parade was like a funeral procession—then you could literally hear people starting to breathe again. People started to loosen up, then 50 bats charged the audience. People ran toward the sidelines, but it wasn’t about fear. The energy switched at that moment from fear to joy. If we ever did a healing work, that was it. 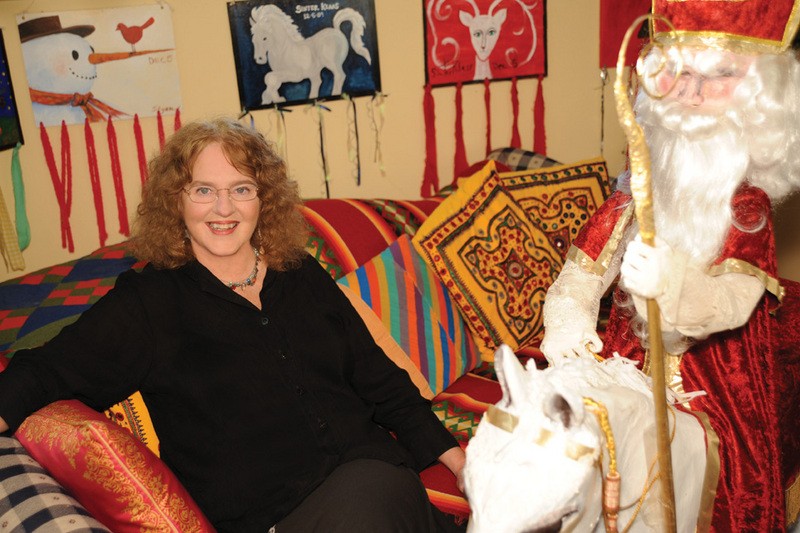