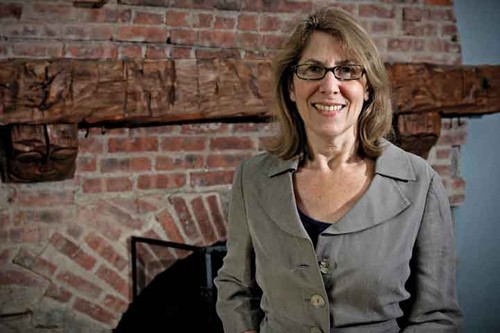 Elizabeth Lesser and Stephan Rechtschaffen optimistically opened Omega Institute in Rhinebeck with absolutely no experience in running a retreat/workshop center 34 years ago. The first catalog used words like "holism" and "consciousness," with “fringe” classes on alternative health, ecumenical spirituality, meditation, and yoga, all now mainstream.

In 2008, Lesser moderated and co-produced with Oprah Winfrey a dynamic 10-week webinar, based on Eckart Tolle’s book A New Earth: each Monday four to five million people worldwide tuned in to Oprah’s TV show to experienc e “the power of now,” emanating from mindfulness and meditation practices. Lesser’s effectiveness with these topics has led to current hosting on Sirius/XM for Oprah’s “Soul Series,” and speaking engagements nationwide.

She identifies Sufi master Pir Vilayat as pivotal in her work and life. He inspired the co-founders to establish Omega, suggesting the name as well. “Omega Point” is a term used by philosopher Teillard de Chardin to describe the peak of unity and integration toward which all life is evolving. The concept has guided Lesser at Omega, now reaching 23,000 students each year in Rhinebeck, Manhattan, Costa Rica, and California.

Describing the shift from “Me to We” in program orientation, Lesser asks how each of us can contribute to turning the destructive course of the planet around. Leading by example, Omega demonstrates 100 percent water recycling at its Sustainable Living Center, awarded the distinction of the first Living Building to also be  LEED Platinum certified.

New York Times best-selling author of The Seeker’s Guide and Broken Open, Lesser lives in Woodstock with her husband, and has two grown sons and a grandson, Will.

I recently spoke with Elizabeth Lesser at Omega Institute in Rhinebeck.

The Women and Power conferences that you spearhead at Omega are life-changing; what is the current impact of feminism?

That is like asking a fish about the impact of water. The liberation of women has profoundly changed the world and continues to. The opportunities that young women have today look very, very different from the opportunities I or my mother or her mother had. And the gifts women have brought to the world are many and game-changing for the entire world. Of course, there are miles to go before women all over the world, and here in America, are safe, free, empowered, and respected. And miles to go before “feminine values” (for lack of a better word) are validated and utilized in all segments of society. While some empowered women will end up resorting to the old, fear-based, “power-over” style of leadership, research shows there is indeed a female style of leadership that is more inclusive, less combative, and more communicative. I believe when a critical mass of women join men in the leadership arena, there will be a better possibility of the eradication of violence as a way to solve anything. That we will see the creation of policies that help women and men balance the needs of family, children, and work. That the careful stewardship of the Earth will become a priority.

Omega has developed a platform for leaders in fields from sustainability to meditation to reach thousands. What is Omega’s significance within our society?

One of the strongest, best things about America is the separation of church and state. We are so fortunate to live in a society where people can worship as they want. But something has been lost. Culture has come to worship buying things, gathering at the mall. We’ve lost the true meaning of community, of belonging to something bigger than just the self or family. At Omega we put a lot of attention on creating meaningful community, and because of that Omega has become “sacred space” for tens of thousands of people. It’s a warm-hearted center, where you can put down the burdens of everyday life, where you can ask the big and deep questions about life, where you can continue to grow and have meaningful connections with others of like mind, heart and spirit.

I understand you feel psychology and spirituality are closely aligned; expand on that thought.

One of humankind’s greatest ironies is that throughout history, prophets who have preached genuine, radical experience in place of dogmas have become, after death, central figures in “isms” they would never have supported. The world’s great spiritual personalities, like Jesus and Buddha, were considered revolutionaries and even heretics in their day. That’s one of the reasons their words are so fresh today. I believe that some of the best spiritual teaching today comes from psychology, which is a relatively new discipline. Religions preach love and tolerance and surrender to a higher power. Therapy helps us do that. If we try to be loving and open without first investigating what blocks the love within us, we just layer dogma on top of wounds, misconceptions, and entrenched opinions. Therapy breaks up old patterns so the love stream within us can flow. Good psychotherapy helps us transform unconscious, destructive behavior into something more healthy, loving and generative of harmony and creativity. From the beginning of human community there have always been those in the tribe elected to wake people up, give them kicks in the psychic butt, so they can fulfill their destinies and contribute something of value. They were called shamans in older cultures; today, they are called therapists—people who become a bridge between alienation and connection.