“Lord Jesus Christ, Son of God, have mercy on me, the sinner,” known as the Jesus Prayer, is an Eastern Orthodox devotion that is meant be repeated and internalized. Many know it as the vehicle of a satori experience in J.D. Salinger’s novella Franny and Zooey. In 2000, when Clark Strand was on a commercial flight with his family, the plane hit serious weather and for a fatal instant seemed certain to crash. In the anguish and confusion, Strand found himself intoning the Jesus Prayer. This surprised him, as it also might anyone familiar with his career as a teacher of Zen meditation, a Tricycle magazine editor, and the author of books that brim with Zen wisdom. Though raised Christian, he first encountered the potent mantra in Salinger. To Strand’s mind, the difference between prayer and meditation is merely semantic; still, the Jesus Prayer led him to a close study of the Judeo-Christian scriptures. How to Believe in God: Whether You Believe in Religion or Not (2009, Doubleday Religion) unites traditions in Strand’s ongoing search to find a new way to be religious. Strand is also the founder of WholeEarthGod.com, a forum for inter-religious dialogue and Koans of the Bible, an open-ended discussion group that takes up the Bible from a multitude of perspectives.

Do you still think of yourself as a Buddhist?
I’m not sure I think of myself as belonging to any religion, but I certainly have practiced across several different traditions and studied them in great depth and appreciate them a lot. What I do now is I sponsor this open-ended free discussion of spiritual texts using the teachings of one religion to interpret the spiritual texts of another.

What was your Zen training?
I did Zen training with a Japanese Zen master for 14 years and I was on the verge of being installed as a roshi and I walked away. The reasons are complex. A big part of it was I felt that religion itself was on the verge of changing in some very profound way. But this was a very ill-formed idea—all it was, as God says to Abraham in the Bible, was “Get out.”

How is religion changing?
What’s happening in religion is those traditions that are based on top-down authority and sermonizing or formal talks by experts are beginning to decline. What’s on the rise are spiritual movements that stress discussion. It is very much like what’s happened on the blogs and with journalism, for instance. It’s become much more dialogical, participatory, and interactive. We have a group in Woodstock where anyone can come. The Bible is our anchor, but we’re not likely to have anything approaching a religious understanding of it.

Is the group therapeutic?
We’ve been together for about 10 years—people say they tend to get happier, tend to get clearer. It isn’t that the group sets out to accomplish that. We’re a group that has therapeutic benefits but we don’t have any therapeutic agenda. Nobody’s ever trying to heal anybody. We just get together and talk about things that really matter.

How did the koans of the Bible study group start?
When I came back to the Bible, the first thing I noticed were the koans, or Zen paradoxes, and the Bible’s just filled with them. My Zen master had taught me koans and how to work with them and help others study them. So I put this ad out, "Koans of the Bible," and 50 peopled showed up. This pairing of a term from one tradition with the text of another ignited people’s imaginations. For the first few years, I talked about koans like a Zen master, then I started to notice that what people really loved and what really transformed them was the discussion.

How does doubt play into the believer’s journey?
No one comes to religion, as far as I can see, other than the fact that they’re locked in a battle between faith and doubt. Part of them wants to believe and part of them can’t quite manage it. So they engage in all kinds of religious study or religious behavior and attitudes; a religious way of thinking is a way of trying to vanquish their doubts and get more faith. But how can you possibly get rid of doubt, unless you brainwash yourself? And on the other hand, if you don’t have faith, then you haven’t fully opened yourself to the possibilities for joy and love and the blessings that sustain your life at every moment. Belief is really a step beyond, because at a certain point we realize that this battle between faith and doubt is itself all right.

Do you think belief is more difficult for people now than it was in biblical times?
Well, I think it’s getting easier, oddly enough. I think people are approaching the true object of belief—which on my blog I call the Whole Earth God. As people begin to look at nature, not through the metaphor of Yahweh, or God, or Vishnu, but at the planetary ecosystem itself, what they’re finding is that we’re safe together or not at all.

The Golden Rule that grows out of axial age religions, “Do unto others as you would have them do unto you,” is now ripening and fully maturing—if you follow the logic far enough, what it tells you is that ecology is going to have a very profound effect on you yourself. I think that’s what people are beginning to intuit now. 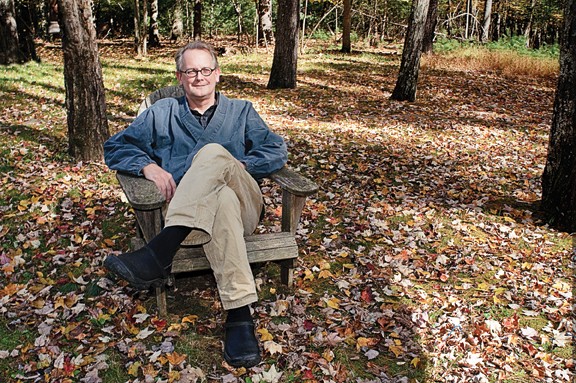