In 1985, some idealistic New York City theater types established a professional theater in a shuttered Art Deco movie house on Canal Street in Ellenville. Their opening night, on July 4th weekend, featured Kit McClure and Her All-Girl Swing Band as well as skits and song-and-dance numbers by the theatrical cooperative—the 400-seat theater was standing room only. (A reunion of the original company is planned for July 3, followed by a performance of Shadowland's current production, “Guest Artist,” starring John Astin.)

Shadowland has been rolling along ever since, staging a half dozen productions of first- and second-run plays in the former Borscht Belt town each summer. Recent seasons have included productions of Yasmina Reza’s “Art” starring Judd Hirsch; John Cariani’s “Almost, Maine”; and Paula Vogel’s Pulitzer Prize winner, “How I Learned to Drive.” In addition to its summer season, Shadowland has branched out into children’s educational programming with classes in the fall and winter months and with four plays for children each year. Shadowland also encourages new plays and developing playwrights with its off-season reading series. (Elliot Gould, who played wise-guy detective Philip Marlowe in Robert Altman’s The Long Goodbye, is slated to read a treatment of a new play based on the charcter in October.)

Brendan Burke, a freelance actor and director who went to high school in the Hudson Valley (Washingtonville), returned in 2004 to take over as artistic director at Shadowland. Burke’s most recent achievement has been to acquire permanent housing for visiting artists. (Actors and directors usually stayed in local homes and rented apartments.) Provident Bank donated a house in downtown Ellenville for this purpose, which was renovated over the past six months by a dedicated core group of volunteers.

What does the job of an artistic director at a regional theater consist of?
Basically, a responsibility from an artistic perspective, to stick to the mission of the theater. Normally, its more like a two-headed monster. There’s a managing director who will take care of the business administration side and there’s the artistic director who will do the production of the artistic side. Here, one person does both. It’s a little bit of everything. I administer, I write grants, do all the payroll, pay all the bills. Then there’s casting, directing a few shows, and really monitoring that the theater is sticking to its mission. I’m the only full-time, year-round employee.

How does the Shadowland define its mission?
The core of it is that its socially relevant, thought-provoking work with a vision, which I break down to three things. It’s being relevant: The stories that we choose to tell should be important. That’s where we’ve been most successful; we found our niche there, we found our audience through that. Accessibility is the second part. We’re not doing high art that people have to stretch to get. We’re not doing “Oklahoma!” or “Pippin” either, but we’re doing shows that are stories and are accessible to our audience. The third thing, with accessibility, is affordability. We’re probably the most affordable theater—at least that I know of—that’s doing the work we do. Tickets are $28 at top price, subscriptions are as low $100 for five shows, and we have this pay-as-you-can program, when we take the available seats and people can just come and pay whatever we want. We’re not just a theater for folks who can afford it, we want to be here for everybody. The “with a vision” part of the mission I interpret as keeping up with what the better regional theaters are doing as far as the choice of work we’re doing. We’re doing unpublished works, new works—we’re developing plays now, trying to stay current with what’s going on with the better playwrights in the country. That’s kind of a fun mission to be able to do. We’re not really locked into doing plays that are going to sell very well. Our first show this year—“Two Jews Walk into a War”—is unpublished, got no stars in it, and we’re doing 95 percent attendance for the first two weeks of the season.

How’s the season going so far this year?
Actually, despite the economy, we’ve had our best year ever—by a lot, too. I think that was probably the pattern for smaller, regional theaters outside of metropolitan areas. We can present ourselves as an option to metropolitan theaters where you have to travel and spend more money. You can get something of quality locally and cheap.

How do you get these well-known actors like Judd Hirsch, John Aston, Stephanie Zimbalist to come to Ellenville and perform at Shadowland?
We ask them! Some are contacts that we know or we know somebody that knows someone. But they tend to come for the kickoffs of the show that we choose to do. John’s an old friend and we’ve worked together before and it’s a perfect role for him. [Astin stars in Jeff Daniels’s “Guest Artist” through July 18.] They’re not working for any more than any other actors. It’s great that we’re not buying them in or anything. They’re really doing it because of the story. I think they kind of sense that it’s our priority and it’s worth doing.

What do you think the role of a regional theater is in the community?
Particularly [in the case of] Shadlowland in Ellenville, it serves as a cultural hub for the community. These days, the perspective to look at it is, it’s an economic catalyst. In an economy like this, sometimes it’s hard for people to rationalize funding for the arts, and certainly not art for art’s sake anymore, but there are restaurants on this street that probably wouldn’t be here if the Shadowland wasn’t here. The bottom line is we’re bringing people out on the weekend to Ellenville which is fantastic. People are looking for a place to eat, they’re spending money, money is going back into the town. From the business perspective, the role of theater and large organizations like this has a very important business side as well. I think it’s an important thing for folks to realize, when they start looking at funding for the arts: It’s a quality-of-life issue but it’s also smart business.

You do get a lot for your investment if the money you’re spending on the arts is being spent well.
Particularly, I think that theater is a living newspaper, I think that it adds perspective to your life. We do stories that when folks come to see and hear these stories, they’re gaining another perspective on looking at things. Stories that are relevant in that way are important. It’s a multiplicity of perspectives, it advises people of the world from many different directions. We try to enliven folks perspectives by the theater and stories we present. 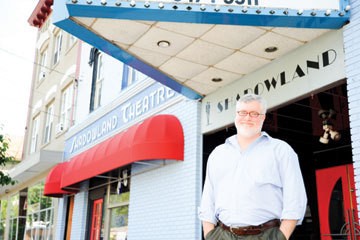