As of press time in late May, Governor Paterson and the state legislature had yet to agree on a budget for the next fiscal year, an impasse driven mostly by bickering over how to reconcile a multi-billion dollar deficit. Among many ideas being floated to aid state’s economic woes—closing state parks, furlough days for state workers—is one to radically reduce arts funding. Governor Paterson has proposed cutting New York State Arts Council funding by 40 percent, from $41.6 million to $25.2 million. Advocates for the arts characterize the governor’s proposal as a crippling blow to the mostly small nonprofit intuitions across New York that rely on state money for their continued existence.

Benjamin Krevolin is the president of Dutchess County Arts Council, a Poughkeepsie-based organization that offers services for artists (professional development, workshops), administrates grants for artists and arts organizations (in both Dutchess and Ulster Counties), and advocates for and promotes awareness of the arts in Dutchess County. A Dutchess County native, Krevolin is a graduate of Vassar College and the Julliard School of Drama. Prior to joining DCAC in 2003, Krevolin worked as a freelance theater artist in New York City, Seattle, Los Angeles, and Stockholm.

On June 21, the Dutchess County Arts Council, in collaboration with the Hudson Opera House and NYS Arts (a statewide alliance of arts organizations), will host “Grass Roots Arts Advocacy,” a half-day conference at the FDR Library in Hyde Park to give members of the Hudson River Valley arts community the skills they need to advocate for arts funding. For more information: www.artsmidhudson.org.

Government fuding for the arts has been on a downward track for as long as I can remember. When did that trend begin?
Public funding for the arts took a huge tumble in the late ‘80s, early ‘90s. There was a big cut in ‘91 under the Cuomo Administration on the state level. There was the big brouhaha with the NEA-funded Mapplethorpe exhibit [in 1989]. The anti-art political climate was such that federal funding for the arts was basically cut in half. We’ve been working for the past 20 years to recover from those cuts. That’s the modern history. It’s also important to note that the NEA was founded by President Nixon, who was a piano playing president.

How important is arts outreach to youth?
A lot of our effort goes into increasing demand for the arts and that’s very difficult. That’s one of the reasons why we’re so vocal about not cutting the arts in all these school budgets this year. The minute those kids stop getting music education, then organizations just lost audience members. All of the music training that kids get in school, all of the arts classes play a part in the future of the arts—if people don’t grow up with arts they won’t continue to live with it.

How do you make a convincing argument for arts funding in an uncertain economic climate?
With all the misery and how difficult it is in our personal lives, now’s the time when we need to invest in our shared communal assets. Now’s the time we need free concerts in the park, now’s the time we need cheap tickets at the Bardavon. All the more reason why there should be public funding of the arts right now. Time and time again studies show, particularly in schools, the schools with the highest percents of arts programs have the highest tests scores, graduation rates, attendance.

On the public level, people who participate in the arts are more likely to volunteer, are more likely to vote. All of that builds civic capital and strengthens our communities. I feel like it’s easy to look at the arts as an extraneous expense but I think once you start looking at it you realize that the value goes much deeper into a community in terms of economic, civic, and cultural development. All of that’s incredibly valuable. If you look at the budgets, no one is going to balance the budget by cutting the arts.

How much money are we talking about?
In 2009, public funding of the arts on the local, state, and federal level amounted to about 5 dollars per person in Dutchess County. That’s for everything.

Instead of relying on government funding?
The funding the arts get from the government is important, but what that money does is it allows us to raise money from other sources. In general, we have to rethink what we’re doing. Is there a new way we can provide cultural services in our community? The nonprofit structure that we all have may be something we need to reconsider.

Are you suggesting a for-profit model?
No, rather than having individual organizations, is there one nonprofit that can have status for a number of different organizations? This would allow greater fluidity. A dance company can be born and flourish for two, three, or four years and then it can fizzle, and when that artistic spirit is fizzled, then it can move on and there’s no loss and we can transfer all that energy to another dance company, a new idea. We would be investing in arts programs rather than arts institutions. We would be investing in the product and not the infrastructure that upholds the product.

The funding streams rights now are 20th-century funding streams. We all know how to fund the institutions. That worked for a while but now there are these smaller organizations trying to start and there’s no air, there’s no oxygen left.

What can people do to advocate for the arts?
We have to hold onto as much public funding as possible because public funding acts as seed money. Where those seeds are planted more investment will happen. People who care about the arts really have to work hard at lobbying their elected officials about holding the line on funding cuts. It’s also really important for people who love the arts to consume more of it, and bring two friends when they go to consume it. If people buy a painting, they should have an unveiling party at their house. We have to keep the energy up about consuming art. If people love the arts, they have to make that love infectious. 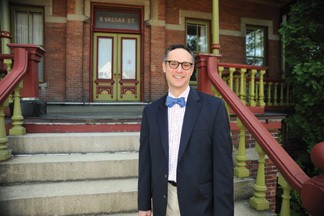