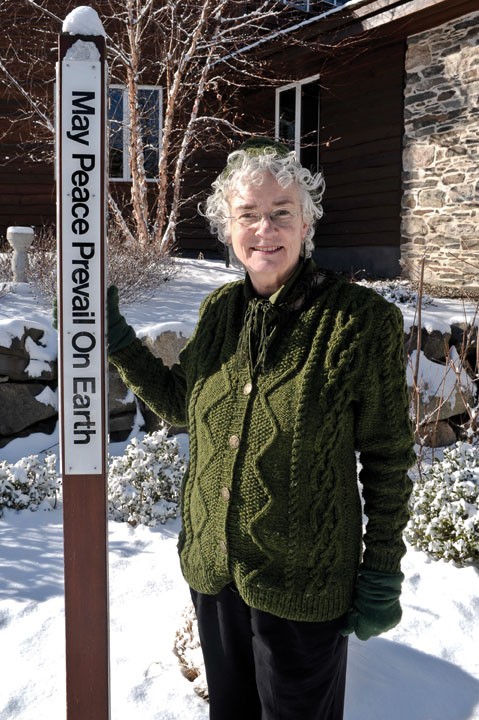 Barbara Valocore might have been living in Los Angeles today, continuing her career as a classical singer and performing with the Los Angeles Opera had she not chosen to return to her Dutch ancestors' stomping grounds in the Hudson Valley to cocreate a family foundation with her father, Paul Hancock. Hancock was an early pioneer in cable TV, building a community broadcasting network in Midwestern Connecticut way ahead of the curve (in the 1960s). In 1992, he sold the company, gave away a goodly amount of the profit, and embarked on creating a philanthropic foundation with his daughter. Three years later he died, leaving Valacore, then in her early forties, to take up the reins of the nascent Lifebridge Foundation. This small foundation (a staff of two and a board, of which Valocore is president) has had a big ripple-effect impact. For years it provided grants to small not-for-profits whose missions matched its own: to promote the interconnectedness of all life and one humanity. More recently Valacore's family built, in partnership with Victorian Builders, Lifebridge Sanctuary—a stunning, 12,000 square-foot green building on 95 acres of land atop the crest of the Shawangunk Ridge in Rosendale. Lifebridge Sanctuary hosts community events and is available for meetings, workshops, trainings, and retreats. Lifebridge.org.

What was the inspiration for you and your father to shift from your careers to creating a foundation?

My father's motivation for all his work was to serve the community, and being of service is an ethic I grew up with. So we felt that the money from the sale of his business should be used to better the lives of others. When he got very sick, I realized it would be up to me to pull this through. I had a lot of soul searching to do, and had to educate myself about how a foundation works. You don't know where life is going to take you, but if you are careful and you listen, it can take you amazing places.

It was very inspiring to see the video on Lifebridge's website about the hundreds of people and organizations you've supported over the years.

I'm glad you watched that video. It's made entirely clips of grantees and the work they have done. It was so fulfilling and wonderful to support really good projects and smaller efforts that may have a harder time getting funding. We also provided general operating support, instead of project-oriented funding, which small nonprofits have a hard time getting. Now, however, we are not able to give any grants, as our small endowment is being used to maintain the Sanctuary building and property. But we are reaching a lot of people in a different way, when they come here.

People speak about the feeling of inspiration and power from this place.

It's something I noticed right away on this land, and I was hoping it is something others would feel. There is a special feeling from the land itself. But it's also the people who come here. They often do contemplative work and contribute their particular energies to the space. The next group comes in and feels that something has been contributed, and benefit from that and contribute back. It's about the connection between the inner life and the outer work. We feel very strongly that the nurturing of that life becomes a sacred task that connects everybody. Interconnectedness is central to our mission.

What do you do that nurtures you?

I have an organic garden here. In the warmer weather, I want to go up to the garden all day—that's all I want to do. And I want to be in the forest more. I have a very strong connection to the natural world. It really nurtures me.

Lifebridge is involved in a number of community-based activities. What are some of those?

We have a winter solstice public event at the Sanctuary and ask guests to bring food to donate to the Rosendale food pantry. We also ask groups that use the sanctuary to donate any leftover food. We host three or four art shows a year at the Sanctuary, and encourage local artists to submit works linked to themes of the United Nation's International Years. For instance, 2012 will be the Year of Cooperatives and the Year of Sustainable Energy for All.

Speaking of sustainability, what made you decide to put up the solar photovoltaic array on the Sanctuary building?

It's always been a green building. The new construction was built around an old Dutch stone house, using trees from the property, recycled materials, and lots of other sustainable features. This year we were able to get a NYSERDA energy audit and some local solar installers explained how the panels would pay for themselves over time. We're really happy that we did it. We've generated almost a megawatt of power in a month, and we're net-metering [connected to the electrical grid] so when the sun is shining the meter is spinning backwards, feeding electricity back into the grid. There is also an education piece to this. Part of our mission when we take in groups is to educate them about energy use. The solar panels are even more of a reminder that you are using energy when you leave lights on unnecessarily. People are getting the connection in a much better way.

Is there something new in the works you'd like to tell us about?

Yes! We have 95 acres of mostly wooded land here, and we're working with Appleseed Permaculture in Stone Ridge to design an edible forest garden and develop the special features of the property. All this area was clearcut in the 19th century, so there's little old growth here. But I want it to be a place of intense beauty where people can walk and experience nature. We really hope to build a strong relationship with the permaculture community locally and globally, and have this become a place where people can stay and learn about it.

Community Foundations of the Hudson Valley: A Regional Benefactor Sponsored