Rumors travel fast in a small town like Rosendale, often only to be debunked by the time they make it from one end of Main Street to the other. But one particularly juicy bit of gossip circulating last fall turned out to be true: Not only was the much beloved Rosendale Theatre for sale, there were serious buyers interested.

To many in this artsy/funky little town, the news of the potential purchase was devastating. Word on the street was that at least one interested party was a corporate entity from outside the community who might not keep it as a single-screen theater, or even a theater at all. In the age of the corporate multiplex, and at a time when people can conveniently download movies to watch them on screens small enough to fit in their pockets, a 300-seat single-screen theater might seem little more than a quaint anachronism to a real estate concern.

But to the people of Rosendale and moviegoers throughout Ulster County, the Rosendale Theater is much more than a charming throwback. You can help yourself to popcorn for $1 on the honor system. Seventy-seven-year-old Anthony “Uncle Tony” Cacchio, a son of one of the founders, runs the box office before heading upstairs to operate the projector. To patrons of the theater, it is an important community gathering place and a cultural gem where you can see current indie movies for $6, and where, increasingly, live theater, dance, and music performances have been selling out. It’s also one of three outposts for screenings during the annual Woodstock Film Festival in the fall.

“When a number of us heard there may have been an offer on the theater, we all kind of gasped,” recalls Richard “F-Stop” Minissali, a Rosendale resident who sits on the town council. “The thought of someone coming in and turning the theater into apartments or a lumberyard or something else was very upsetting. It was scary to think about losing this critical anchor business and cultural center. So a bunch of us got together and said, ‘Okay, let’s see what we can make happen.’”

And so was born the Rosendale Theatre Collective, a growing adhoc group chaired by Minissali that aims to purchase the theater from the Cacchio family—who have owned and run it for 61 years—and turn it into a nonprofit.

They plan to continue the Cacchios’ tradition of showing mostly indie and art house films, as well as the family’s more recent dedication to live performance, and benefits for social and humanitarian causes. In recent years, the Cacchios have hosted a diverse group of live acts, including Tuvan throat singers as part of the World Culture Concert Series, a performance of “The Vagina Monologues” that benefited Hope’s Fund/The United Way, and performances by Professor Louie and the Crowmatix to benefit Iraq war veterans.

In just a few months, the Rosendale Theatre Collective has managed to raise $45,000 of the $160,000 they need by April to secure a mortgage. They’ve got even higher hopes, though: to pull together $600,000, which would provide enough to buy the property outright, renovate it, install a professional DVD system that will be used in addition to the existing projector, and give the Collective access to a wider assortment of films at less expense; and refurbish the building’s loftlike second floor to use as additional live performance and rehearsal space, doubing the place’s potential for entertainment—and earnings. The theater has always been a lynchpin of the local economy. “There is a direct correlation between when that theater is full, and when the restaurants in Rosendale are full,” says collective member and filmmaker Nicole Quinn, who debuted her 2008 film, Racing Daylight, at the theater. Having three active performance spaces would only up the ante.

Six hundred thousand dollars—even $160,000—is a lot of money to raise in a tight economy. But the group is determined. “We have many fundraising events going on,” Minissali says, “and a very dedicated group of people working on this. Although it’s more likely to happen if we can find a few angels to help us,” he added.

Local celebrities have gotten on board, joining the collective’s 17-seat advisory committee. Among them are actors Aidan Quinn, David Straithairn, Melissa Leo, and Denny Dillon; Philadelphia screenwriter Ron Nyswaner; and author Kim Wozencraft, whose novel, Rush, was made into a film starring Jennifer Jason Leigh.

Also advising is Michael Cacchio, whose grandparents first turned what had been the town’s firehouse into a movie theater, and who currently runs it with his uncle. Uncle Tony will be staying on as the projectionist, at least for a while, and looks to train a new generation in his dying craft.

“This is going to be a very seamless transition, with the Cacchio family very much involved,” Minissali says.

The family was initially very conflicted about selling. “My father died unexpectedly last year, and it caused us all to reevaluate,” Michael Cacchio remembers.  “Uncle Tony said to me, ‘You know, your father had a couple of years where he was able to retire and travel and enjoy life.’ I heard it as a hint, and realized that it was getting hard for him. The movie reels are very heavy; it’s technically very onerous splicing the films together. So I said, ‘Do you think it’s time to sell?’”

It hadn’t occurred to the Cacchios that anyone in the community would be interested, and so they entertained outside offers. It turned out to be as depressing a prospect to the family as it was to the community.

He and the rest of the family were happy when the group approached him, and they gave them time to come up with the initial binder of $25,000. The then-nascent Collective worked tirelessly, raising the money in the space of just three weeks.

“We’re all really happy with the group that is buying it,” Caccio says. “These people are all friends, and it’s an eclectic mix of business owners, artists, and filmmakers who are dedicated to preserving what we started. As a nonprofit, they are going to have access to grant money and other opportunities to make the theater even better. I’m really gratified by that.”

Donations to the Rosendale Theater Collective can be made via the group’s website, www.rosendaletheatre.org, and are tax deductible. 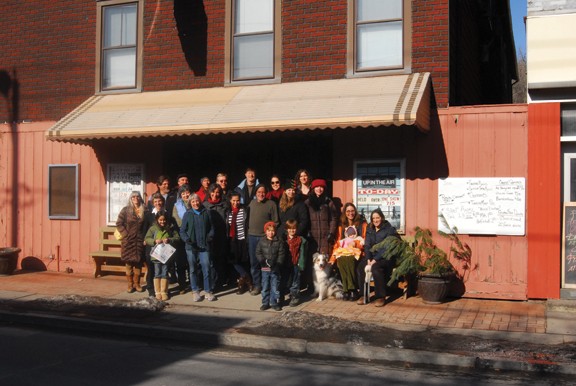