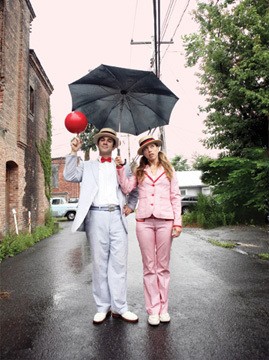 Keith Nelson and Stephanie Monseu know what fire tastes like. They’ve been eating it together for the last 15 years. Since founding the Bindlestiff Family Cirkus in 1995, Monseu (aka Ringmistress Philomena Bindlestiff) and Nelson (aka Mr. Pennygaff, Kinko the Clown, and—on occasion—Kinkette) have brought their ever-changing variety show to coffeehouses, libraries, airplane hangars, nightclubs, big tops, and stages all over the world. Bindlestiff performances draw elements from burlesque, cabaret, vaudeville, sideshows, and traditional circus acts, while adding a stylish mix of humor, strangeness, and intimacy very much their own. Nelson and Monseu may juggle and eat fire, trample shards of glass, swallow swords and neon lights, spin guns, and crack whips on target, but the Bindlestiffs are professional people charmers. For them, “making circus” goes beyond mere spectacle—it’s a participatory experience.

Nelson estimates that the Bindlestiffs have taught “probably thousands” of people how to juggle since they started teaching circus arts over a decade ago. In addition to their Cavalcade of Youth program, which brings seasoned performers together as coaches and mentors to young aspiring artists, Monseu and Nelson also manage a number of camps, after-school workshops, community college courses, and hospital sessions in New York and the Hudson Valley. Their dedication reflects a passion to bring the benefits of the circus to everyone, to contribute to the continued life of their art by educating people about it, and (of course) to perfect their skills by passing them on. Fire, by the way, tastes like “burnt lips.”

Tell me about how you met and began performing together.
Stephanie: We were both working at an all-night restaurant. We met through each other’s respective exes, which was horribly ugly, but eventually, when the dust settled, we fell in love. It was late night, a snowy January morning at 3am. We were taking a break from waiting tables together. And outside, next to the garbage-filled Dumpster, behind the around-the-clock restaurant in Stuyvesant Square in New York, Keith taught me how to eat fire, and that was it. That’s how everything started.

How have you found some of the artists you’ve worked with?
Keith: Over the years we’ve had a couple of different open-mike things, like Lilly Lipid’s Open Stage cabaret, which Stephanie does, and then I do a thing in New York, once a month, also open stage. So we’ll see new acts there, and people will slowly enter the folds of Bindlestiff through that. We get a good handful of DVDs. Usually we don’t pull anybody from that end, and then in the past three years we’ve found about two or three acts through Craigslist.
Stephanie: From overseas, actually. Two years ago, we were looking for a musician for our tour, and we got this guy, Frederik Iverson, from Denmark. He came from Europe to play keyboards, from a Craigslist ad. When we flew him over here and met him at the airport—
Keith: He lived with us for a week and a half before we even heard him play anything.
Stephanie: He “got” us right away. He is an excellent composer and, just as important, a great accompanist—a vital attribute for a musician working with live performance.

What’s the most daring stunt or trick you’ve ever done?
Stephanie: [to Keith] Passing clubs with a sword down your throat.
Keith: Nyeh.
Stephanie: I don’t ever want to see you do that. I can read about it, hear about it, but I never want to watch that again. He and another sword swallower were at [the First Annual Sideshow Gathering and Sword Swallowers Convention], and both swallowed 16-inch bayonets and were passing clubs between them. Your instinct as a juggler is to catch everything that’s coming at you, no matter what you have to do. I thought that was crazy.
Keith: Nah, that wasn’t too bad.
Stephanie: How ’bout your upside-down straitjacket escape over Niagara Falls?
Keith: [shrugs] I think Steph on the motorcycle, on the highwire, is scarier than anything I do.

So much of what you do depends on where you’re able do it. What’s that like?
Stephanie: There’s a real sense of illegitimacy about us. People don’t perceive us as a real circus or a legitimate company because we have a long tradition of performing in nontraditional venues. That kind of thing bothers me sometimes, but then I think of all of the amazing places that we have been able to deliver—and participate in—this experience.
Keith: We’re taking circus to the audience, as opposed to forcing the audience to come to us, in many places. We get the highbrow, the hipsters, the common folks; in our family shows, we get the whole range—you’ll see an 84-year-old that remembers vaudeville and burlesque, and you’ll have a 24-year-old that thinks this is the first time this has ever been done. That’s the magic of what we do, regardless of where we take it.

Do you have a favorite venue?
Keith: The next one. Always.
Stephanie: The Spiegeltent is definitely one of my favorite venues. The one at South Street Seaport is great, and the one at Bard is great. Before we even heard about the one coming to Bard, we had been fantasizing about a portable venue like that, because it is such a magical atmosphere. What we’ve always tried to create with Bindlestiff shows is that sense of wonder, that sense of being encapsulated in a bubble of otherness. The Spiegeltent does that by itself, and we’ve always wanted to have our own little version of that to take around.

The Bindlestiff Family Cirkus will perform at Bard College in Annandale-on-Hudson on August 1 at 3:30 and 8:30pm and on August 2 at 3:30pm. The troupe will also offer a Juggling and Cirkus Arts Summer Workshop in Chatham on August 24, 25, and 26. www.bindlestiff.org.

Esteemed Reader of Our Magazine