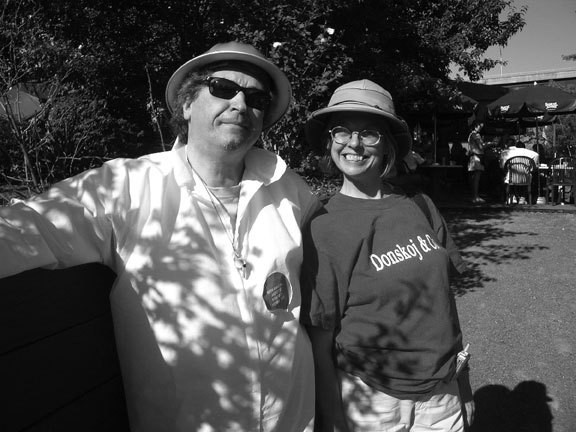 The recurring joke of the Artists’ Soapbox Derby, held every year on the slope of lower Broadway in the Rondout section of Kingston: “It’s all downhill from here.” Started in 1995, the derby featured eight soapbox racers and attracted 300 people. This year’s kinetic sculpture “race,” the 14th annual organized by founders George and Nancy Donskoj, is expected to attract 7,000 people, and will showcase over 40 entrants in three divisions: adult, youth, and family.

The derby is a singular event: part artists’ fantasia, part adolescent mechanics run wild (all entries are vetted from an engineering perspective), and part family-friendly community spectacle, it knits together the diverse demographic elements of the region for an afternoon of the most moving kind of public art. I spoke to Nancy and George in late July in the upstairs of their gallery, Donskoj & Company, which faces the race’s starting line on lower Broadway. The Artists’ Soapbox Derby will be held on Sunday, August 17, at 1pm. www.artistsoapboxderby.com.

Nancy: Well, we didn’t know what we were getting into. I remember being very worried that people would go too fast. We had eight entries and about 300 spectators and it went very well. We got a big front-page picture in the Times Herald Record and it looked like a lot of people because they used a big telephoto lens and it went really well, so we said, “Okay, we’ll do it again.”

What motivates you to organize the derby after 14 years?

Nancy: I think, after every event, you look at the crowd and everyone has a smile on their face. How could you end this? So we do it again, and after every year, and we’ve had such successful derbies where everything ran so smoothly the past couple of years. It just feels like we’re on a roll. It just keeps on going. It’s taken on a life of its own.

George: Well, there’s a lot of work to it, but the fun is still there and the kids love it and the people clamor for it, and it’s a really nice family thing. I don’t think there are too many of those. Most of the people in this help you clean up, too. And we’re here for the arts community. And we do it for us; it still represents us and our gallery too.

Where did you come up with the idea for an "artists’ soapbox derby?

George: Well we didn’t come up with the idea, “The Little Rascals” came up with the idea. I think every kid in the world who lived near a hill must have done that at some point. It was like sleigh riding on dry pavement, which is pretty much what we did. We got baby-carriage wheels and two-by-fours. It wasn’t formal. And it never left my mind from the time I was a small boy. But we really wanted to be an artists’ soapbox derby because we’re an art gallery and we thought this would be fun. And it’s turned out to be fun!

What have been some of your favorite entries over the years?

Nancy: A lot of my favorites have been Alan Adin’s. He comes up with the quirkiest ones. He built a giant head of [former Kingston ] mayor T. R. Gallo, and he did one called Hairball, where he gathered hair from his friend who has a hair salon and made a big giant hairball with this little cat behind it. But the one that really took the cake was when he did a full body cast of himself on wheels and rolled himself down the hill, and it looked just like him.

George: One year, Hank Dijk worked with kids from the Children’s Home of Kingston. They built a giant dragon with smoke coming out of its nose. It was quite spectacular. It really was an accomplished piece of work, all different colors, with snot dripping out of its nose and grueling teeth. It took months. All the kids worked on it with a couple of instructors as supervisors, but they made the whole thing.

The derby serves as a kind of afternoon-long piece of performance art.

George: You can be an artist for a day. You don’t have to be a professional artist. And we’re finding that a lot of kids are building the cars themselves; their parents aren’t helping. They’re doing an amazing thing and they are going to remember this their entire lifetime. Some of them are only 12 years old. So it’s kind of amazing to me that these children are growing up with art in their lives. Because once you get art, you don’t go back. It’s not something you outgrow. They grow up having art. They have a better understanding of what it is to be creative,