Since New Orleans began its slow but determined slog back from oblivion in the wake of Hurricane Katrina (and governmental neglect), there have been many humane gestures directed toward this wounded phoenix. While most assistance efforts have tried to address pragmatic needs such as food and shelter, New Orleans has needed help in healing its soul as well.

One of the more simply expressed, but profound, contributions to that end came from the Mid-Hudson Valley. Adam Markowitz, a Kingston-based piano dealer, recognized that the devastated city needed an immediate transfusion of music to rejuvenate its people. So Markowitz selected nine pianos from his inventory and drove them down to The Big Easy, accompanied by his dog Walter.

Woodstock-based directors Gillian Farrell and Ana Beinhart accompanied man and dog to record Markowitz’s quest. 9 Pianos unfolds as a small series of miracles that restore hope and will in the form of eighty-eight keys. 9 Pianos tugs unabashedly at your heart, but it will also beckon your feet to follow as the churches, schools, and homes that received the Markowitz pianos return to life. 9 Pianos will have its world premiere at WFF.
In an e-mail interview, Gillian Farrell said, “Music is the heartbeat of New Orleans.” Her film demonstrates how Markowitz conducted nine very special heart transplants. “In the face of such adversity, everyone was looking for the key to a greater victory,” she added. “Now they had 88.”

Farrell first learned of Markowitz’s plan on the front page of the Woodstock Times. Having worked primarily in theater, she then established the artist-in-residence program at SUNY Ulster. At one point, she combined her artistry and progressive beliefs for a cable access show on Free Speech TV, “In Your Face.” The show highlighted politicians and musicians like Maurice Hinchey and Pete Seeger. Farrell began making short films for the show, learning the craft as she progressed. 9 Pianos was the first time she considered a full-length documentary, but the purity of Markowitz’s mission inspired her: “I felt it was a lovely film idea.” Farrell had a history with the city; her first Actor’s Equity job had been there, performing opposite Roddy McDowall at an old gambling casino-turned-theater. “My life changed (for the better and in a big way) in New Orleans and I felt this was an opportunity to give back something to the city I love.”

Within two days, Farrell and Beinhart were trailing the piano van down the Thruway. (Farrell had been back five years ago, volunteering at city hall after the devastation, sorting out water and power bills that were being sent to homes that no longer existed.)

“One of the things I noticed in those first few months after Katrina,” Farrell said, “was that there were more musicians playing on the streets and more music than ever before.” Markowitz’s musical donations will continue to contribute to the city’s renaissance, she said.

“This uncommon man had such determination in bringing literally tons of pianos to New Orleans,” Farrell said. “He was unstoppable, methodical, and got the job done. He delivered nine pianos in a day all throughout New Orleans.” Farrell returned to the city at a later date to interview the beneficiaries.

Farrell and Beinhart had no game plan, save for documenting what unfolded in real time. The strategy worked.
“I planned nothing. I shot what was in front of me. I got some set pieces on New Orleans, but one of the things I learned as an actress is to be in the moment. What I got, I got. What I missed, I missed, and my job was to eventually make what I did shoot work.”

Maintaining a documentarian’s distance for 9 Pianos was not Farrell’s agenda. “It was actually an honor to be in New Orleans at that crucial time,” she said, “with so many people in desperate need and when so little meant so much—and when a piano could make the difference between the vast silent wasteland and that same space being filled with the sound of music and hope.” 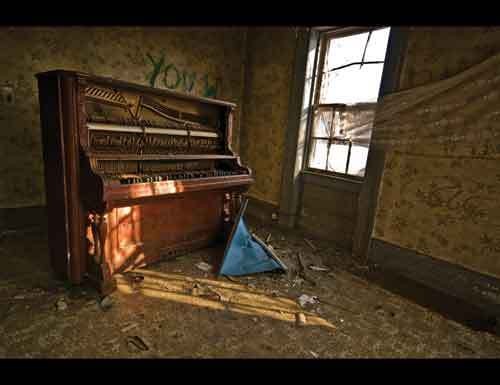