I've always loved Woodstock. The town got under my skin young. It's a place I have come home to often. I started by coming up on the weekends from New York City. Initially, I rented the gate house at the Manor, an incredible stone house just before the spillway that housed the engineers who designed and built the Ashokan Reservoir. My now best friend CJ was my landlord, the lady of the manor.

The last time I came back to Woodstock was after living in London for three years. I decided to bypass Avenue A, where I'd had an apartment since my teens. I wanted to be in the woods. I had a quick pit stop renting a summer bungalow in Bearsville.

My next rental, the home I now own, was love at first sight. The Arts and Crafts house is up Schoonmaker Lane and down a dirt road, seemingly in the middle of town but weirdly remote. It's a Byrdcliffe-style house that looks like it plopped down after leaving Kansas in a fever dream. 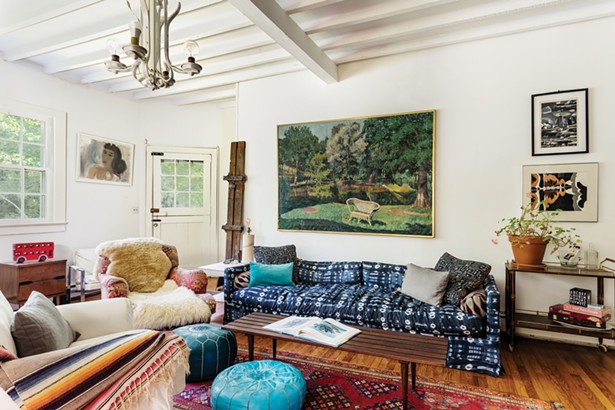 I walked into the living room with its sunny, high ceilings and instantly eyed a small heart made of tiny pearls laid in the base of the hearth. I knew right then I had to live there.

The nearly hundred-year-old house is my refuge. Originally farmland owned by Frank E. Larson, a prodigious painter (his portrait of Mark Twain is on display in the permanent collection of the Smithsonian), the property was cut into three three-acre lots. Mine is in the middle. When the leaves fall off the trees in the winter, the mountains emerge and engulf the property.

I soon learned that Theodore Sturgeon, the writer and distant relative of Ralph Waldo Emerson, lived here in the `60s. Though not well known outside of science fiction circles, Sturgeon was a master of fantasy fiction and was the most anthologized English-language science fiction author in the mid-1950s. His work greatly influenced writers like Harlan Ellison and Samuel R. Delaney. (He is also credited with publishing the first sci-fi stories that dealt with homosexuality in the mid-1950s.) He's famous for writing a few seminal episodes of "Star Trek" for Gene Roddenberry, including season two's opener, "Amok Time." The episode introduced the Vulcan salutation, as well as the phrase "Live long and prosper" to the show. Sturgeon is also memorialized in the novels of his friend, Kurt Vonnegut as the recurring character of Kilgore Trout, an unsuccessful science fiction writer. Vonnegut was honoring his friend's fishy name and piercing intellect. Sturgeon is also known for overhearing L. Ron Hubbard say that the way to make real money wasn't in science fiction writing but in starting a religion. 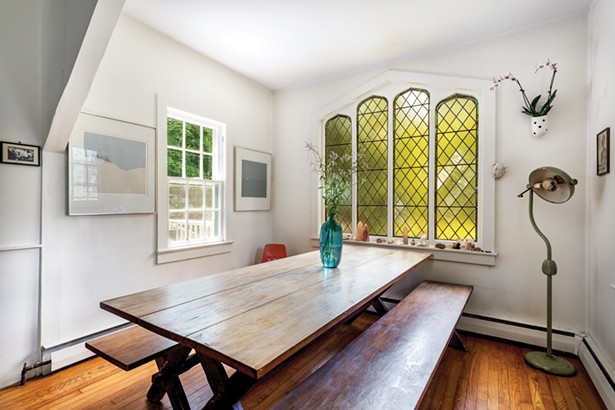 I couldn't get over the fact that I lived in the Sturgeon House. I would sit in the dark and watch "Star Trek," wishing I was a Trekkie. Then I went to YouTube and watched Killdozer! (1974), Sturgeon's cult classic about a killer bulldozer starring Robert Urich. I have a few of his works on my shelves—his classic More Than Human (1953), which won him the Nebula prize, as well his collection of stories The Golden Helix, published in 1979. I want to collect them all.

Soon after moving in, on an outing to Phoenicia, I bought an old Torpedo typewriter at a thrift store. It's in the grass outside the screened-in porch, where his kids told me Sturgeon liked to write.

Noel and Tim Sturgeon, two of Theodore's seven children, rented me the house after their mother Marion had passed on. Two years into living here, they came to clear her belongings. After they sent me an email to let me know they would be putting the place on the market when my lease was up that June, I got up the guts to ask if they would speak with me before they spoke to a realtor. Noel, a professor of Women's Studies at Washington State University, told me she would think about it. She then asked me to write a paragraph or two on what living there would mean to me. I was charmed by this and more than happy to oblige. Here is part of the letter I originally wrote to her: "I would love to be entrusted with this house as it has some spiritual connection for me. It does need a lot of TLC and I would work hard to make improvements where and when I can to keep its integrity and old Woodstock charm. It feels like the right place for me to settle and I would love to call it home." 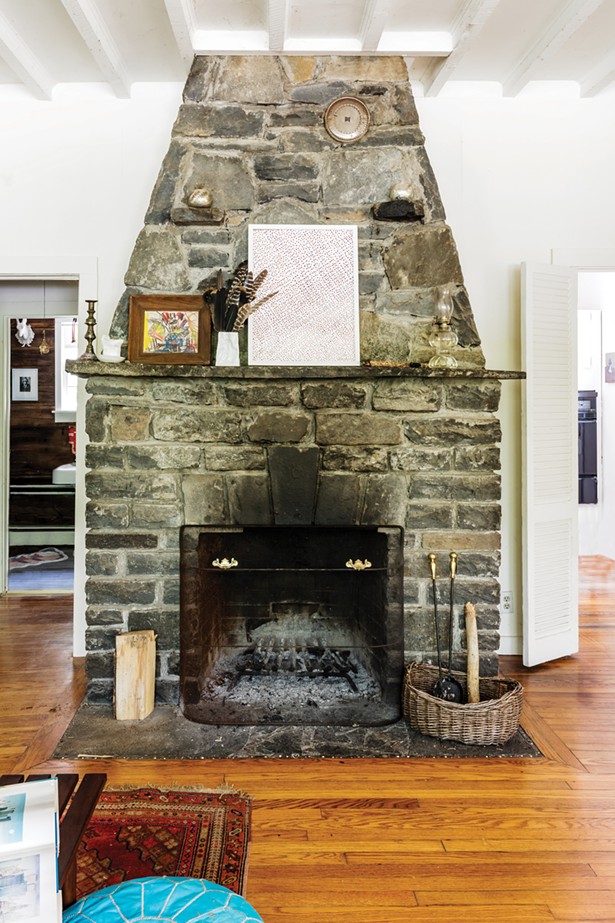 The day I bought the house, I got dressed up to sign my name so many times. By afternoon, the house was mine. I started to explore my property. There was a sealed door between what I called the portal and my living space. (When I was renting I never knew what happened in the portal. I knew it was an art studio connected to the main house.) The night I closed on the house, I had some drunk friends help me muscle the door down.

Inside the portal, the ceiling and windows are perfectly high, and the western exposure is mystical. The wide floor planks are nearly a century old. As soon as it was mine, my friend Simi began using the space as an art studio. She created beautiful pastel girls. We had an art opening and sold most of the girls. The space encourages art. 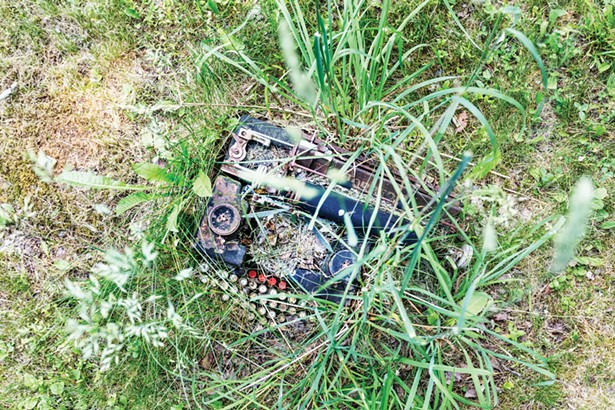 Now that it's been three-plus years, I find the place as enchanting as ever. I planted my wild-child English garden and built a fire pit. I've barely updated anything else. 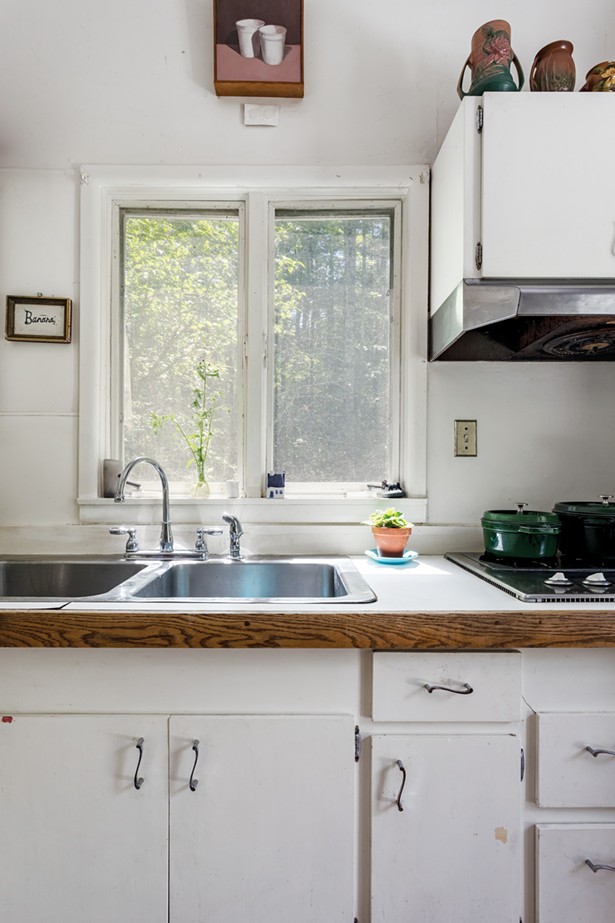 I have some great art from local artists on the walls. I collect Robert Angeloch's serigraphs. I have a triptych of his, Air, Sea, and Land, and a great piece called Sawkill at Zena. With great luck, I was also able to come into a Frank E. Larson watercolor of a field up Wittenberg Road in Bearsville painted in the late 1950s. I eventually gave that to my neighbor as barter for road work. And my favorite piece is a signed pastel by Marion Sturgeon that was left in the shed. I feel like she wanted it to stay here. 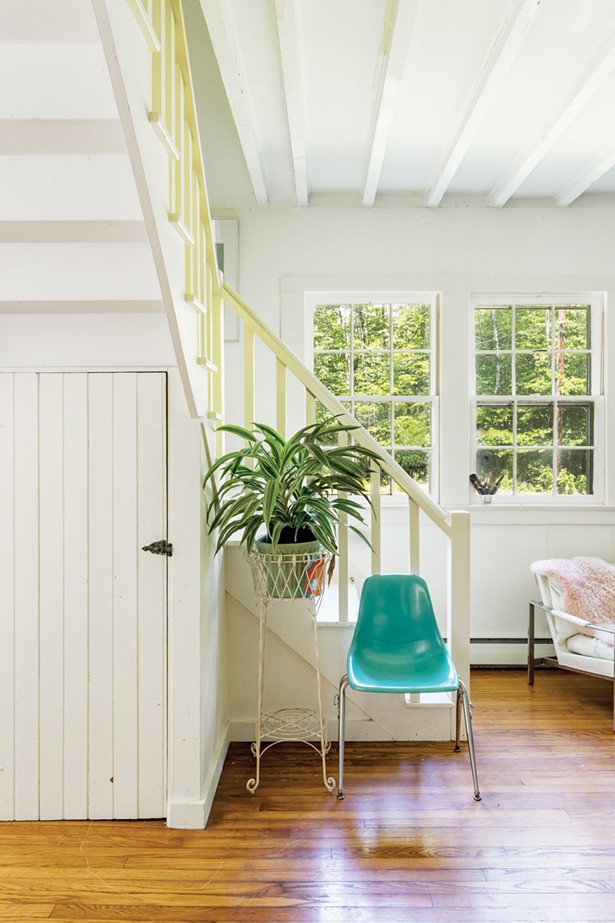 The truth of the matter is I'm driving across the country right now, listening to Ulysses. I'm sitting in a hotel room in Denver on my way to Santa Fe after two weeks in Jackson, Wyoming. I bought a bison skull to put up above the fireplace, above the little pearl heart. I'm homesick. I miss my house in that craving way. I get one sleep before I have to evacuate again, in the age of Airbnb. I'll tell you the truth. I am not interested in being a super host. I don't have one free day for the month of July to bond with the place. I can't wait to have a solid week at home. Mowing the lawn and going for eggs at the neighbor's farm. Coming and going I know one thing, I'll be giving the place the Vulcan salutation.

Speaking of The House , House Profile