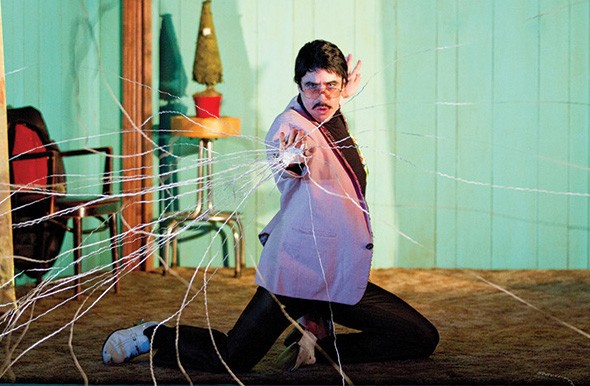 In the flim-flammery world of magicians, where the hand is quicker than the eye, it is ultimately the gilded tongue that beats out both. We love the charming chicanery of the huckster, the snake-oil salesman, even as we’re getting our psyches fleeced and our pockets picked.

The comedy “Elephant Room,” playing December 13 to 15 at Bard College, is as mystifying as a sleight-of-hand master, and equally committed to keeping us in the dark. And charmingly so.

Even show director Paul Lazar, who staged a production this past spring at St. Ann’s Warehouse in Brooklyn, won’t be cajoled into divulging the tricks of the trade. Not even a plot summary.

“They don’t need to know anything,” said the New York City-based veteran film actor (Silence of the Lambs, Beloved, Lorenzo’s Oil, and Philadelphia) and theater director, by way of non-illumination of the storyline. “All they need to know is, their theater is inhabited by these three traveling magicians. They may at times fancy themselves as in the high echelon of their profession—and their magical skills may merit respect, as you will see—but all the audience needs to know is what they find out in the first 30 seconds of the piece.”

Prompted for more of a reveal, Lazar, also an NYU professor, begrudgingly added: “These three very energetic magicians have arrived in [the audience’s] midst to put on their show—and that’s what they do. It’s nothing more complicated than that.”

The prestidigitators in question, waggishly, are identified by stage names alone: Dennis Diamond, Louie Magic, and Daryl Hannah (no relation to the willowy blonde film star). The trio are professional magicians by trade, with long-polished routines; Lazar helped them, over a year long period of workshopping, to fashion a cohesive dramaturgical cocoon in which to contain the razzle-dazzle.

“Three performers had magic routines and characters they had created through their own work. But they didn’t have a context for it. I came in to create some world story, narrative story—whatever you want to call it—so that the guys could do something else than a straight-up magic show.”

Improvisation, the lifeblood of vaudeville and traveling circuses, is a key element of "Elephant Room." Dennis, Louie and Daryl—whom Lazar identifies as “loose cannons”—are devoted to going off script and creating dialogue on the spot. “The narrative of this show is fixed. But the characters are so dimensional and improvisational and so free and so accessible to the performers that they can go out as those characters and do millions of other things.”

Add to this volatile mix absurdist comedy filtered through anarchy, pointed self-delusion on behalf of the three leads, and a smattering of pillow feathers, and you have the formula for an evening of assaultive entertainment. Masochists will be delighted to learn that there are ample opportunities for audience participation.

“Elephant Room” appears to be that unique vehicle, like “Book of Mormon,” that appeals to both high-brow and low-brow spectators. In addition to august institutions such as Bard College, the show will play in coming months at chucklehead venues across America like Dave n’ Buster’s in Concord, North Carolina and The Spaghetti Warehouse in Clarksburg, Tennessee. You have been warned.

8 Hudson Valley Events to Warm Up Your February