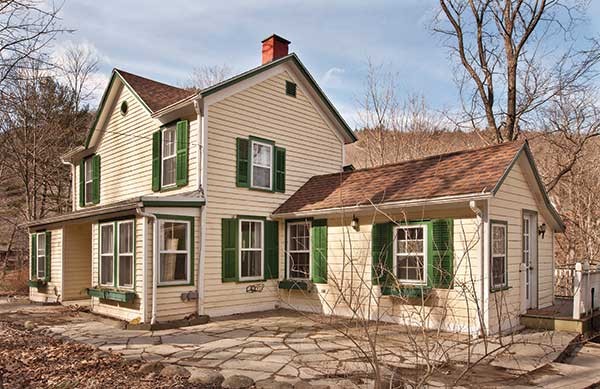 In the years since 9/11, Bob Malkin, a retired Air Force intelligence officer and lifelong poker devotee from Brooklyn who's in his fourth career, and wife Barbara Pokras, a writer and film editor, parlayed a downtown Manhattan pied-à-terre into four houses in the Catskills. Malkin was actually training for the New York Marathon at the yacht basin near the towers when the planes hit.

"After the attack, well, we just wanted out of the city. An acquaintance of mine invited us up to attend the Woodstock Film Festival and we ended up buying his all-glass saltbox contemporary on Fred Short Road in Saugerties. But the problem was, it wasn't on the water, it didn't have a water view," says Malkin, an Aquarian who turned 74 on Valentine's Day.

The couple, who met through a personal ad, have been married 20 years—her first, his second. Malkin has two adult daughters from his first marriage who both live downstate. Malkin is gregarious, edging toward exuberant, while Pokras is more controlled, valuing the creative potential of solitude. Her book, Feeding Mrs. Moskowitz, published in 2010, was recently optioned for a screenplay. Malkin loves to buy and sell things, spending money freely on the things he loves. She's naturally thrifty and an accomplished organic vegetable gardener. They always have a rescue dog (they recently adopted Henry, a shepherd mix, with whom Malkin loves to walk and swim). 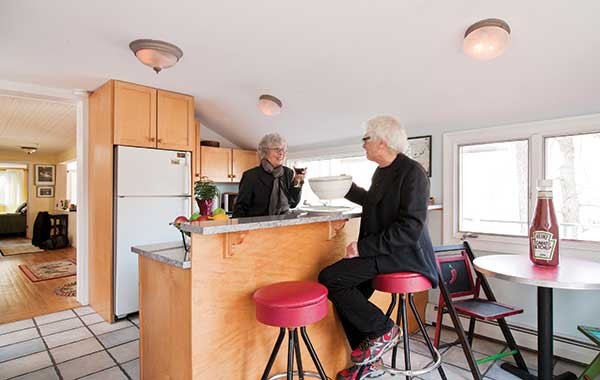 "I actually had to break up with a girlfriend years ago basically just over [waterfront views], so when we sold the New York apartment, we began hunting in earnest locally for waterfront property, and now we own three places with water views," says Malkin. "It's still a real economic opportunity. I don't think the rest of the world really knows yet just how beautiful and unspoiled it is here, and that it's safe and relatively affordable."

"Our West Village apartment had a river view, and Bob's place in Santa Monica had a huge ocean view; it's something that's really important to him," says Pokras, a Capricorn born on Christmas Day. "Bob's not interested in astrology but there's something going on there with his sign, clearly. You might also be interested in the fact that his Venus is in Capricorn."

Think Big!
After the military, Malkin went to work for a sheet metal company that eventually expanded into manufacturing plastics used in food processing. He learned how to fabricate almost anything. That skill set, together with his love of art and playful nature, segued into the founding of Think Big!, a store in SoHo that sold gigantic versions of "American classics" such as Gumby, Crayola Crayon, and Adirondack chairs. 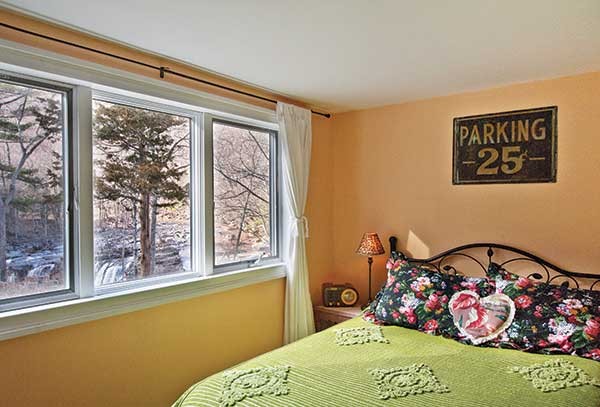 Before starting Think Big! Malkin collected giant antique marketing objects. For example, he owned a seven-foot-long shoe that had been made for the 1873 World's Fair. A century ago, it was fairly common for businesses to have store signage in the shape of the products they manufactured, so people who could not read or did not speak English would recognize the business. Malkin is also a big fan of American sculptor Claes Oldenburg, best known for his public art installations featuring very large replicas of everyday objects. But Malkin didn't think pop art needed to be elitist. Think Big!'s wares were affordable and unsigned.

"I grew up in a house that was very serious. My father was a taxi driver. I was just a wild kid, that's why I ran away and enlisted in the Air Force at 18. Anyway, in 1978 I started Think Big!, which was all about having fun. Why shouldn't you have fun with the way you live?" asks Malkin, whose home in West Saugerties is literally stuffed with art. Some of the sculptures, such as the giant primitive cell phone in the upstairs living room, are left over from the store, which closed as a Manhattan retail venue in the '90s after a long and prosperous run. Think Big! was bought by a company in California who made it a condition of the acquisition that Malkin move to the West Coast for a few years to facilitate the transition.

Malkin Plays His Real Estate Investment Cards Right
Around 1980, Malkin and a business partner had the good sense to purchase the SoHo commercial space in which Think Big! was located. That successful investment gave Malkin confidence in his real estate judgment—plus a terrific portfolio asset. Currently, Malkin rents out the contemporary on Fred Short Road to a long-term tenant. He and Pokras live in a streamside colonial on a quiet road. They also own two side-by-side houses in Palenville overlooking Niobe Falls, which they rent to vacationers on a short-term basis.

In 2005, Malkin and Pokras bought a 1,600-square-foot 1902 Victorian now run as the Waterfall House, a guesthouse that sleeps six and rents for $375 a night in the high season. Last year, they purchased a 900-square-foot 1920 Sears kit house next door, which they have recently renovated and are calling A Streamside Cottage. "Owning the guest houses is a great business, we just love it," says Malkin. "We meet the most interesting people, we stay very plugged in, and it's also a great way to pay the mortgages."

The World's Longest Yard Sale
Malkin and Pokras's private residence off of the West Saugerties-Woodstock Road wasn't an easy or inexpensive purchase. The seller was Gianni Scappin, chef and co-owner of Cucina restaurant in Woodstock. He'd carefully renovated a classic Saugerties two-story hodgepodge colonial with a portion dating from the 18th century. Situated on six-and-one-quarter acres, with 500 feet of stream frontage, it's a three-bedroom, two-bath house with a lot of extras and a deceptively modest exterior.

In addition to having "one of the best swimming holes in the whole area," the house features a chef's kitchen and a steam shower. When Scappin listed the property in the heated market of 2004, he was quickly presented with three full-price offers, one of which came from Malkin and Pokras. Scappin then took the house off the market. Concurrent with relisting the property at a new, higher price, Scappin offered it to Malkin and Pokras at a $10,000 discount that was still $30,000 more than their first full-price offer. 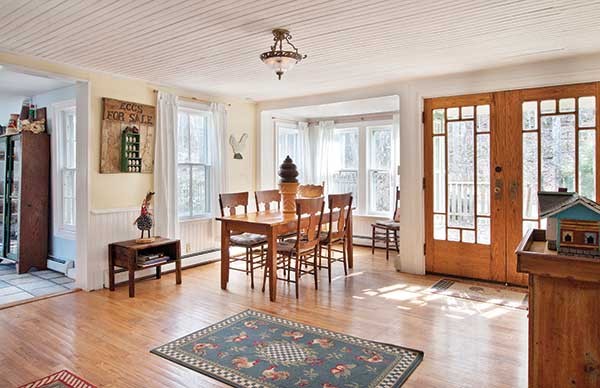 "Barbara's always the voice of reason financially, but on this house, we really agree. It's perfect for us. We haven't really had to do anything to it except paint and hang our art and arrange the furniture," says Malkin. "I'm not sure I would have gone to the trouble and investment of having some of the great renovations here, but I certainly enjoy having them. Life is easy and pleasant."

Both Malkin and Pokras love clothes. With typical flair, Malkin has even managed to turn his sartorial statement and hobby into a lucrative sideline. He sold his collection of 1940s neckties for over $50,000 to a collector in New York. Currently he's buying major Japanese designers such as Yohji Yamamoto and Issey Miyake at thrift stores and secondhand. "We're planning to go to the World's Longest Yard Sale this August. It's about 700 miles long, stretching from Michigan to Alabama," says Malkin. "I can't wait to see what we find to bring home." 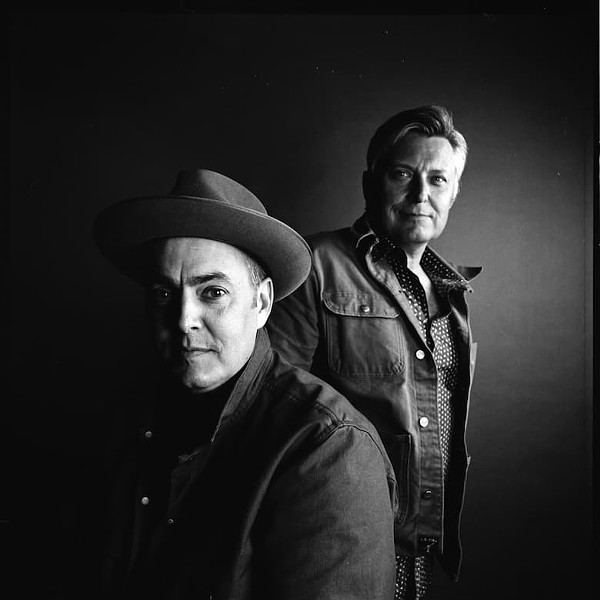