Don't worry; despite the title of the show, and her age—Montano is 76—she's in perfect health. Nonetheless, during two performances at the Dorsky she'll lie inside a coffin for two hours, occasionally being bottle-fed mother's milk by a nurse. (Is she suggesting that death itself is a type of food?) The phrase "I'm dying" will be painted over and over on the wall behind the casket, the way a recalcitrant student writes "I will never talk in class" 100 times on a blackboard. When Montano is not in the casket, a plastic skeleton wearing the artist's life mask will take her place.

"It's just a natural spiritual transformation; you either get bitter or better," says Montano about aging. One of her motifs has been impersonation: she has performed dressed as Bob Dylan, Mother Teresa, and other notables. Now she is impersonating an aged woman, with a "mask" created by time itself.

Also in the exhibition will be seven dolls that Montano made from her mother's clothing. Each doll will lie in a little bed next to a message expressing gratitude for one aspect of life, such as: "I am grateful for money because it helps me feel secure." Visitors to the gallery are asked to gaze at each doll and contemplate their own benefactors.

A large screen will show a number of Montano's videos on the subject of mortality and healing, including Mitchell's Death (1977) and I'm Dying—My Last Performance (2015). She has worked with video artist Tobe Carey for 25 years. 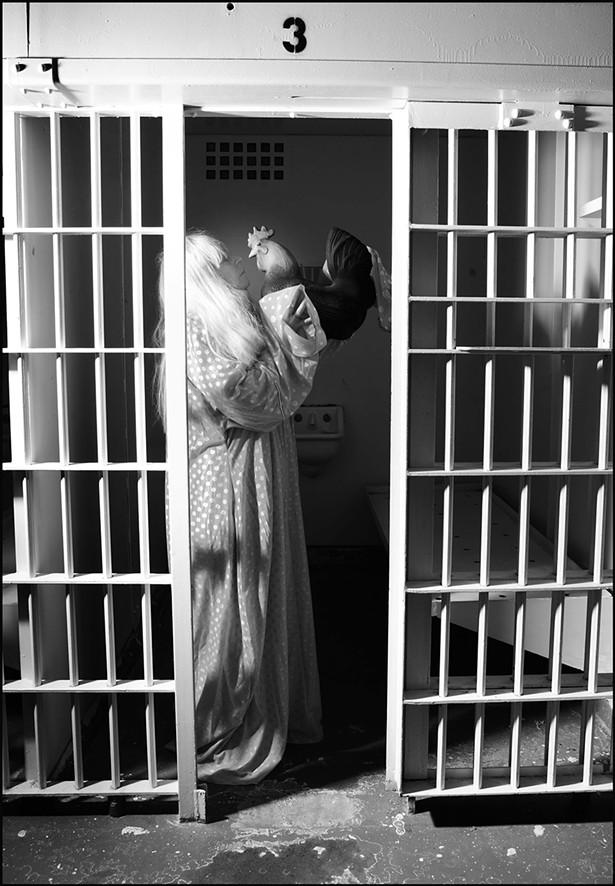 Montano is best known for "Seven Years of Living Art," a performance spanning seven years involving the chakras. Each year she dressed in the color of a particular chakra and spent hours a day in a room of that color, meditating on a particular tone associated with that chakra. Montano was a pioneer of durational art—performance that takes place over an extended period of time. In fact, she helped redefine performance. There's no such thing as an opera lasting seven years.

Montano was raised in Saugerties, and returned to the area in 1998 after teaching at the University of Texas. She now lives in the house where she grew up, which she has renamed "The Art/Life Institute & Transfiguration Hospital."

"As she gets older, and death is inevitable for everyone, it's a very interesting twist in her career to, instead of talking about art/life, to start talking about art/death," observes Anastasia James, who curated the show. "How can she carry art into death? I think it's very brave of her."

"Linda Montano: The Art/Life Hospital" will be exhibited at the Samuel Dorsky Museum at SUNY New Paltz from January 23 through April 14. An opening reception and performance will be held on February 9 at 5pm. (845) 257-3844.

A Jan Sawka Retrospective at the Dorsky Museum