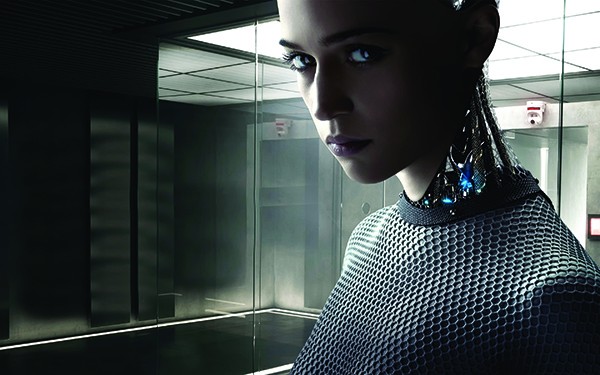 The other night I went to the movies with my cousin Dominick Vanacore, and we saw Ex Machina. One of my principles of film is that any movie worth seeing once is worth seeing twice, and Ex Machina qualifies.

It's the story of a programming genius (modeled after a search-engine billionaire who goes into other stuff, much in the spirit of Google) who develops both the mental algorithm and the physical engineering for extremely vivid human-styled robots.

The action begins when one of his employees arrives at the research and development compound, which looks like it's located in rural Alaska with the weather of Hawaii. The employee's job is to perform the Turing test on one of the robots—to engage with the robot and determine whether it's convincingly human.

The Turing test was conceived by Alan Turing, one of the inventors of computing (such as the concepts of "computation" and "algorithm"—or automated reasoning). His test involved whether a human can distinguish human intelligence from machine intelligence. In Ex Machina, it's performed as a series of interviews between Caleb Smith and the robot, who's called Ava.

Director Alex Garland (a Brit—this ain't from Hollywood) intentionally did the film low-budget, because with less money you have to have a stronger concept and rely on acting rather than special effects. That said, the CGI used to create the human robots is utterly convincing. They spent their budget well.

The scenario is set inside a massive, mostly underground facility that is designed for security and surveillance. Every move, sound, activity, entrance, and exit is controlled by computer programming. But Ava indeed has a mind of her own. Caleb is charmed by Ava from the first moment. The test is over when it begins.

Ava passes the Turing test, and a lot of bad things happen in the process. I would love to tell you exactly what, but I don't want to reveal too much. What we get, however, is the perfect metaphor for the current Internet and the potential future of society: machines that cannot be distinguished from humans.

Currently this is not because the machines are so advanced but rather because most humans are so easy to fool. Most perception is really projection. We see what we think we are. But then something odd happens, which is that we become like the environment in which we function. Humans are becoming like machines more rapidly than machines are becoming humans.

This takes some perceptive skill to see. The Internet is an environment, and by a definition I like to work with—that of Marshall McLuhan—an environment is an invisible phenomenon. Most people do not consider the Internet a robot, but that's exactly what it is, and it's exactly how we use it.

It becomes visible when we have problems, or some other factor changes the patterns we're used to processing below the surface of consciousness. Mercury is currently retrograde in Gemini, making several contacts to Neptune in Pisces. Mercury is the worldly god of technology and communication. Neptune is the worldly god of the imagination, deception, dreams, and intoxicating substances.

Put them together in the digital environment and we are likely to get some observable effects, or rather, effects worth observing. Mercury retrogrades are a time to pay attention and tune into the environment; the challenges make that environment more noticeable, and your responses to it easier to feel.

This blend of retrograde Mercury plus Neptune would alone be the perfect blend to create this effect, but currently we also have Mars in the mix, which is adding energy in the form of impulse, determination, frustration, and anger.

In sussing this out, let's start with anger. Many people are pretty pissed off as it is. We normally tend to gloss over this with social graces or, alternately, ignoring one another. Various numb-out substances, predominantly liquor and prescription meds, also push anger below the surface. They are coping mechanisms.

But if you look at the constant state of war, and its popularity, and the prevalence of violence and why people indulge in so much psychic violence in the form of films, TV, and games where people are constantly dying (or being possessed by evil spirits, or raped, or stolen from), the shadow side of society is easier to see.

The current mix of energies has some real potential to be self-destructive. It also has an "unconscious" quality.

Now, take this state of mind and transplant it onto the Internet. Consciousness, already bound up in so much frustrated struggle, engages an environment where we are basically prisoners. We know we're observed like prisoners. Any honest assessment reveals that the Internet and the NSA (the previously unheard-of National Security Agency, whose supposed real job is to spy on encrypted communications of foreign governments) are one and the same. The Internet is a surveillance tool. That it's so useful makes it all the better as one.

Your search results are being tracked, and if they are not, you're likely to feel like they are. If you sit at a desktop computer or use a mobile device, there's a camera constantly pointed at your face, and microphones listening to you. Add this to the security cameras now placed in every corner of the world (including many people's homes) and it's easy to see that the environment of the R&D facility in Ex Machina is close to the current state of affairs.

Here's the real problem: many people seek freedom on the Internet. That's where we go, most of the time, at our current phase of history. There's a level of freedom that is indeed seductive. The Net is not a substitute for experience, it is an experience, but it's one that tends to leave people feeling empty. Yet most people have imported pre-existing emptiness with them to their experience of the Internet. I have observed that, as digital technology takes over, we're leading lives less based on tangible experiences and more based on abstract concepts.

Back in the AOL days, there used to be that Surf Safely message on the welcome page. Every time I saw it, I would think, what actual danger lurks on the Internet? What can actually happen to a person from "surfing" a website? (Clearly, the implication was to avoid photos of sex, which is funny, since Hot Chat was the feature that made AOL profitable at the time the company went public—a fact that was concealed from investors.)

It's true that the Craigslist Killer (whatever happened to that?) is not so much an imaginary threat, but you would have to go way out of your way to get from a website to an in-person encounter with a murderer. So really, that's a lot more than an "Internet danger."

If the dangers of the Internet are largely imaginary, or require someone's full participation, so too is its satisfaction. People go to the Internet most often because they are lacking in some tangible experience, then they don't get that thing at all. Most of the time, unless you're really focused and know exactly what you're doing, you get something else—particularly in social experiences online. You get an abstraction, a description, a photograph, that leaves you wanting. It's an advertiser's dream come true.

One variable is that the more you contribute to the Internet the more real it is to you, because you're investing more creative energy. Where you invest creative energy you will have a more satisfying experience—that's true of just about everything. Cooking a basic meal for yourself has a sense of accomplishment that paying for an expensive meal in a restaurant does not have.

So, we now go looking for food in the land of zeros and ones. We seek human contact in the midst of programmed systems, whether you're talking about texting someone you could be sitting with, or seeking a partner on one of the many, many dating and marriage websites that have become extremely big business these days. Instead of going out and talking to people, we're training ourselves to rely on robots to do it for us. Robots may be good for some things, like making a random playlist work. But they are terrible for actual human interaction because they filter out everything that truly makes us human—the nuances, the sensory experiences, the rich silence, eye contact, warmth, and touch.

An e-mail petition is not a protest or a community meeting. An online course is not sitting in a classroom with your peers. A YouTube video is not a performance. Yet the Internet by its nature demands a kind of participation. The problem is that most of the time that participation leads nowhere. It's true that there are circumstances where the Internet is very helpful, especially for isolated people, those who cannot leave the house, or those in areas where no other culture is easily available.

To the extent that we have some experiences that seem real or relevant, we bring most of the material, and do a heck of a lot of projecting of our own human traits onto who or whatever we're interrelating with through millions of lines of code, all while being observed by some authority figure that is the equivalent of a cyber god.

While the universal fear associated with robots is that they will rise up and take over the world, I think the real issue is that they are slowly training us to be like them, to respond without emotion, instantly, providing exactly what is demanded. They are training us to expect people to be like them. That's a subtle way to take over the world, and consciousness, and its evolution. Remember that when you go out on the street and people are walking around staring into their little computer screens. Remember that every time you hear about a car accident caused by someone who was texting.

Even when people get together, there's an increasingly stilted quality to the interchanges. Many young people consider it intimidating to meet people in person, or to be in any social circumstance where what's expected of them is not made explicitly clear. It's as if social interactions now must be part of an algorithm or nobody knows quite what to do.

It's as if the risk factor is too high in merely having an unscripted encounter with another person.

Now for the quest—reclaiming our souls in the midst of a time when advanced programmers are trying to figure out how to synthesize the soul, or distract you from remembering that you have one. There's no easy answer to that, nor is there an easy way to state the issue. One problem with all this automation is that instead of leading us to lives of leisure, every waking minute seems to be occupied and time is running out of control.

If you choose to explore some variant on physical reality, tangible experiences and in-person encounters, you may discover that fewer people than ever are interested—especially if it's a situation where they must "be themselves." To be yourself means to be who you are, thinking on your feet, unscripted, while being seen and listened to.

Soul means that your body and your senses are central to your life experience. And therein lies the rub: Being in your body reminds you that you won't have that opportunity forever.