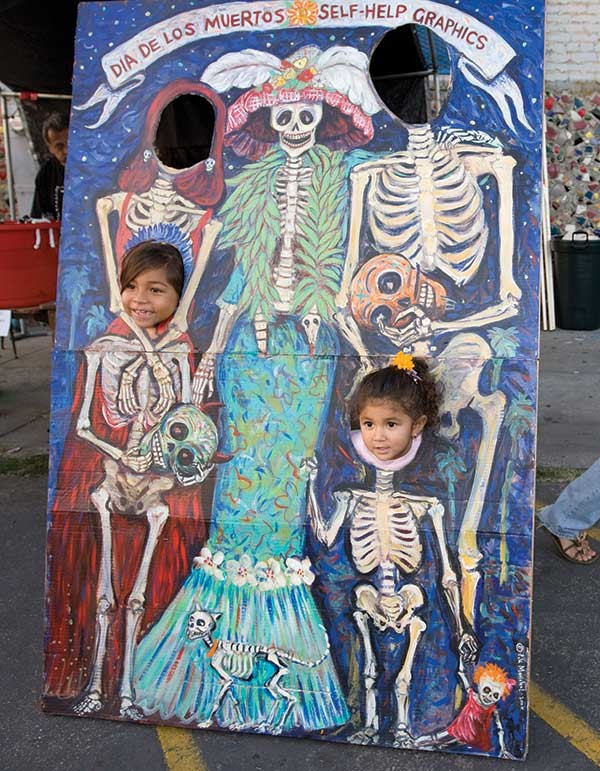 Every parent enjoys sharing life's bounty with a child. In the early years, so much is new, fascinating, and often cause for joy: Bird! Butterfly! Ice cream! Generally, the teaching moments are more sweet than bitter. Until, of course, the subject of death rears its cowled head. Like sex and money, death presents a fact of life difficult to discuss, especially with innately inquisitive children. Yet, just like families all over the world, local households are finding ways to broach the subject of mortality with the ones who only just got here.

Latham social worker Betsy J. Osborn specializes in bereavement counseling and family therapy. In her 40-year experience, she's seen many parents struggle with revealing end-of-life issues to kids, in part because they fear a loss of control. "Silence is a defensive mechanism," she says. "People are afraid they're going to be emotional—they don't want to appear weak. I tell them it's okay to show your emotions. I always say, 'This is human; you have to help kids learn about feelings. What you share with them is what helps them learn.' It's part of a larger health and wellness discussion. If you don't talk about that, what else do you not talk about? Sex?"

According to Osborn, parents' own religious, ethnic, and/or secular childhood experiences tend to inform their methods, or lack thereof. When she worked in hospice in ethnically diverse Schenectady in the early `80s, she says, "Italians and Greeks had more familiarity with grandparents living with them and dying at home, not being shuffled off to hospitals." For them, death presented less of a taboo, and they freely discussed it with children. But many latter-20th-century Americans were raised in secular households, and modern-day parents often recall their own childhoods as lacking in ritual. The result: troubling silence, even a reluctance to say, "I don't know what happens when we die."

Washingtonville's Leah Byrons, mom of three kids under seven, recalls her parents avoiding her paternal grandmother's funeral. Byrons was 12 years old. "We saw my grandmother quite a bit," she says. "She was the only grandparent I ever knew, and when she died, I think they worried we'd ask too many questions if we went to the funeral, questions they couldn't answer. Now my mom regrets it." By contrast, Byrons has taken her brood to several funerals. Her kids deal remarkably well with open-casket viewings and burials. In fact, she says, they not only behave, they "lighten the mood." And, while her family is not religious, she welcomes the chance to field their inevitable questions: "Because they're so young, we just say, 'The body gets sick and dies, but the spirit goes to Heaven,' and they accept that explanation. I believe in reincarnation, and when I feel they're old enough, we'll talk about that."

Perdita Finn, of Woodstock, has raised her two teenage children Buddhist. The family's belief system includes reincarnation, but also acceptance of the body's fragility, which includes touching corpses (pets and humans), allowing bodies to lie in state before saying good-bye, and incorporating hospice when her father was dying at home. "My dad was a surgeon, and he talked about death all the time when I was a kid," she says. "He got cancer, and he invited us to see him. He was very weak. He got all the grandkids in bed with him and told them, 'I'm going to die, but it really isn't a very big deal. It's what everybody does. My mother did it, my father, your parents—we're all going to do it, and it's okay, but saying goodbye is hard.' A day later he was dead. It was the biggest gift to his grandkids, the way he died with such openness. They spent the day after lying in bed with him and holding his body, unafraid. It was amazing."

Finn has seen plenty of parents shy away from such things. "People say it's ghoulish; they're really scared of death, and part of that fear is in the not knowing. We're not confronted by it on a daily basis the way we were 100 years ago, when babies, children, and old people were dying around us more frequently. People used to be laid out on the dining room table."

Betsy J. Osborn agrees that our culture has gone through a period of anxiety about death, particularly in regard to teaching kids about it. But, as a mental health professional, she's seen improvement in the last few years. "I think it's getting better," she says. "Hospice has changed things; among other things, they teach how to talk about it. And communities are more open, with counselors and materials." Osborn is that rare elder who extols the virtues of the Internet, and Facebook in particular, as a means of helping kids (of a certain age) deal: "It's wonderful in terms of finding a place where people can go to express themselves, to communicate. It has an organic, dynamic ability to enable kids to feel like they're part of a whole."

Osborn says parents who had unsatisfactory childhood death experiences inevitably get another chance with their own kids. "Sometimes people remember seeming fine at the time [of a loved one's death], but they're coming back as adults, they're getting married, having kids, and they have to go back and rework it, because they're making bad choices, using bad judgment. I kid people and say, 'If you don't get it right the first time, it'll come back and hit you in the head, and then you can come and see me.'" She says she advises parents to give kids—and themselves—six months to grieve before considering bereavement counseling.

What all of these women agree on is this: Sorrow, which can encompass a myriad of emotions, is normal. Just like death itself. And while our ever more youth-obsessed culture denies its existence, we can fill in the gaps for our children, who may cry and grieve, but who will thank us for the time we took to face it in some way. They'll remember the intimacy of a parent sitting with them and allowing the questions, regardless of what the answers may be.