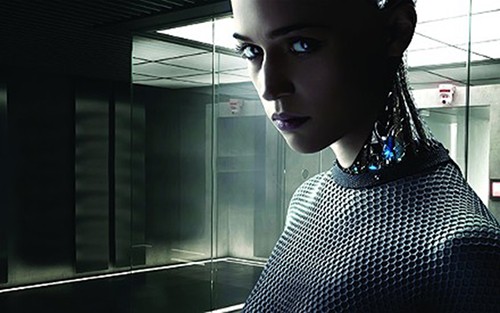 I would first like to point out that the review (written by a man) was about a film that was written and directed by a man; and secondly that the film was about a man who is seduced by a female robot; a female robot that has been programmed with the male employee's sexual preferences. Sexual predilections acquired through nefarious means of privacy intrusion when the employee was on the Internet.

Is this every guy's dream? Or every geek's dream? To have a female programmed to his personal and specific likes and dislikes? I suspect that might be the case.

Does this film (or even this review) apply to females? Is the world around the reviewer, which the reviewer creates quite clearly, in his article "Life With and Within the Robot," a world seen primarily through male eyes? Yes it is. And therefore, it doesn't equate or transfer or translate equally into the female vernacular.

Think about that in reverse. A brainy, computer-talented, female employee is singled out by a genius-Geek female employer who is rich and powerful, who lives and works in a magnificent hideaway where, by spying and collecting data on what the female employee views (when said employee goes onto the Internet), the employer has created and programmed a handsome male robot out of the specific sexual likes and dislikes of the female employee. And then the male robot does its version of the Free Willy thing, leaving the female to die. How does that sit as a translation that would be acceptable by a major film studio, such as Disney?

I adore sci-fi! Lets be clear about that, I will take it any which way it comes, whether it's in a book, short story, magazine article, on tape, on film, or in a poem. But it's primarily male, from Hitchhiker's Guide to Star Wars and then over to Avatar, just like the New York Times crossword puzzle is primarily male. And therefore, the script of Ex Machina, like every other covert version of the Barbie-versus-Roger Ramjet fairytale, falls into an expected role scenario where your reviewer, and the film itself, promotes a set of strictly segregated mores which continually put men and women into culturalized straitjackets where they will ultimately fail. And even when we get the powerful acting of bilingual Sigourney Weaver in Alien, what do we get? We get one female fighting another female. As terrific a film as it was, the only thing that was missing from that subjugating fantasy was the mud.

The May issue made me think of what was left unsaid. The fascinating profiles of Alejandro Jodorowsky and Leon Botstein brought home the point that each of these creative, sensitive people descend from ancestors that fled the Cossacks and the Nazis. Each of them lost relatives in the pogroms and the Holocaust, and the world is a lesser place for what those lost relatives might have contributed to society. Perhaps another Botstein would have made a medical breakthrough, or another Jodorowsky might have penned a profound novel. We'll never know.

For many Jews, such as myself, we can only lament the lost possibilities. The current issues in Israel/Palestine have become the new prism from which the Gentile community perceives Judaism. And that's a shame. (I am neutral on that issue, having deep sympathies for both sides.) I hope that one day, Jews will once again be seen in the global community as producers of avant-garde cinema, thought leaders on postsecondary liberal arts education, and many other issues. Thank you, Leon and Alejandro, for keeping the torch alive.

I enjoyed your story "Little Red Bird" [Editor's Note, 5/15] so much. Thank you for writing it and for saving the Little Red Bird!

You are right about outside cats. They are hyperpredators, not only killing a staggering number of birds every year, but countless other defenseless creatures as well. The American Bird Conservancy—Abcbirds.org—sides with you (and me!) and has a website encouraging keeping cats indoors.

Star of the Stars

I sing monthly praise to the wise man you feature each and every month in the pages of Chronogram. Of whom do I speak? Chronogam's Eric Francis!