Let There Be (Energy-Efficient) Light

As the sun set on May 15, a pink pastel glow illuminated the horizon near the Walkway Over the Hudson. The entrance on the Poughkeepsie side was loaded with Walkway goers. An elderly couple strolled by holding hands, a bicyclist leisurely weaved through the crowd and a woman walked her pocket-size dog. African drummers and the Riverbank Banjo band entertained passersby. They had all turned out to watch the LED lights along the Walkway get turned on for the first time. Tickets cost $5, and the sold-out event attracted 3,000.

At about nine o’clock the crowd thronging the bridge was perched 212 feet above the Hudson River, eagerly waiting to see the bridge glow. And then, all of a sudden, the white lights flashed on, one by one, until the entire span was lit. An impromptu chorus erupted, singing “Blinded By the Light,” the Bruce Springsteen song that shot to the top of the charts in 1977 after being revamped by Manfred Mann’s Earth Band. Red Hook resident Gregory Coston said of the lighting, “It was very pleasant. We enjoyed it and we’ll come back for sure.”

Lighting the Way
One man said earlier that week that he planned to be down below taking a photograph of the event. That man is Andy Neal, the brains behind the LED light project.

When asked what he thought of the LED lights along the world’s longest pedestrian bridge, Neal said, “The basic concept is awesome. Some stuff I would change, but you’ve really got to think it’s the first time its ever been done on the planet, so obviously there are things that you would do differently if you were to do it again.”
Neal said the white lights on the Walkway are a “very special color” and compared them to a reading lamp. “It is very pleasing on the eye,” he said.

“This planet is in big trouble and you have more than enough energy in this country to be self-sufficient you just have to change the way you use it. You don’t need to be building any more Indian Points,” said Neal, founder of Poughkeepsie-based Andy Neal Lighting (ANL). The company, which designs and sells prototypes for advanced LED lighting systems, also goes by the name LITgreen.

According to their website (www.andyneallighting.com), ANL provides LED fixtures that can help save about 80 percent of energy, are lead and mercury-free and have a lifespan of three to five times longer than traditional fluorescent lamps. An LED can stay lit for up to four hours a night for 30 years.

The more than 81,000 LEDs strung along the mile-and-a-half Walkway cost about $1.80 an hour to run. “Our innovative system makes it possible to light the entire Walkway with as little energy as it takes to operate an average home clothes dryer,” Neal said in a press release. “At this very moment we are moving from the season of lights into a new age of light that will change the world.” (The lights will only be turned on for special events for the immediate future, as the Walkway seeks more funding to run them on a consistent basis.)

Over 400 tubes were installed in 43 sections of the bridge, but only on one side (facing south) to fend off light pollution, or misused light. “If you’re walking across at night, what you don’t want to have is light in your eye. You also don’t want light in the sky. You need the vista around you. You need to be able to see the stars. You need to be able to see the city,” said Neal. “And because the tubes are only an inch in diameter, what we can do is put them on the back face of the handrails. You can angle them down so that they literally just light the actual concrete decking to the other side of the bridge.”

Congressman Maurice Hinchey (D-NY) commented on the Walkway project. “This new lighting system will make the Walkway even better for the thousands of pedestrians and cyclists who enjoy the soaring views of the river as they cross the bridge each week,” said Hinchey, who secured $874,000 for the Walkway lights. “The fact that we are able to light up a bridge that is over one mile long without causing light pollution and by using such a small amount of energy is a testament to the innovation and technological advances that are happening right here in the Hudson Valley. Andy Neal and the hard-working people at the Mid-Hudson Workshop deserve credit for doing such a brilliant job.”

Last June the Mid-Hudson Workshop for the Disabled (MHW), which was founded in 1948 to provide meaningful work for the Hudson Valley’s physically and medically handicapped, began working with ANL to provide various manufacturing services; their workforce also includes disabled veterans. Fala Technologies, a custom engineering and precision machine company in Lake Katrine, also fabricated some of the LED components.
Generating local jobs is a top priority for Neal. “The real secret here is to get people back to work and I am really, hand on heart, prepared to spread this around as much as we can.”

Neal picked the Mid-Hudson Valley to do business “because it is one of America’s technological seedbeds and a great place to do well economically while doing good socially and environmentally.”

Earlier in the year, ANL was also hired by the United States Military Academy at West Point to retrofit the Army’s lighting system with energy-saving and more durable LEDs. “West Point will be one of the first and best-known institutions in the United States to retrofit its primary lighting systems with the new technology,” read an ANL press release.

In the same release, distributor for the project at West Point Charles Byers of Pleasant Valley Energy Company said, “We project that by switching to LEDs, West Point will save 80 percent in energy.” Byers went on to say, “The savings will be even greater considering that we are able to economically upgrade the existing infrastructure, and avoid the costs and disruption of replacing it entirely.”

Neal said the wheels are in motion for other projects in the near future, such as working with an a large fish farm in Hudson to transform their lighting infrastructure.

Some might expect Andy Neal to be a nerdy scientist wearing a lab coat and massive glasses with tape wrapped around the bridge, speaking in some esoteric, scientific language that the laypeople will never understand. But that couldn’t be further from the truth.

Neal left college to tour with a reggae band, and never looked back. He got most of his experience doing lighting for concerts, TV, film, and theater.

A native of the UK, Neal started working with lights as a youngster. “I was making funny little stage lights for the local sort of kiddy bands at the youth clubs and stuff. As my mom will attest, I would be sitting there with bits of silver foil and covered light bulbs on the kitchen table taping things together.”

Neal spent most of the 80s touring with bands. “I’ve pretty much worked with everybody—it didn’t matter—from country music to techno to all points in between,” said Neal, who claims to be born in the same hospital as Black Sabbath frontman and heavy metal icon Ozzy Osbourne.

When asked if there were some bands that he enjoyed working with Andy said, “We used to do a lot of like the revival tours and stuff. So you’d end up with people like Bo Diddley and these guys. And they were just great to work with.” He has fond memories of carrying the legendary rock icon’s guitar.

He also remembers working with singer Scott McKenzie, best known for his song “San Francisco (Be Sure to Wear Flowers in your Hair).” McKenzie, who Neal refers to as a “real old stoner of the highest order,” left his cell phone in front of a microphone one night during a performance. Neal ran backstage and called him as a goof during a lull in one of the songs.

He called it “a classic moment,” where 3,000 people were laughing at the same time. “I am sure other people will probably tell you a lot more of my history than I can remember… we did have a lot of fun,” he said.
Neal revealed that he also developed a lot of technology that is used to do “crazy” techno shows. “We were kind of the gods of acid house lighting in England at the time.” He later took a job in New York City, where he built equipment that was used to make the Lord of the Rings and Harry Potter movies.

After ping-ponging between England and the US in the early nineties, Andy eventually moved to America full-time and now lives in Salt Point with his wife and two boys. He said he has no time for hobbies, but does like racing cars.

As to the future of LED technology, Neal is unabashedly optimistic. “I think we’re gong to be very, very busy over the next few years,” he said. “Just take a drive up Route 9 from Fishkill to Poughkeepsie past all the shopping centers if you want to see where all the power that’s being used in this country goes—all those parking lots full of lights. General illumination accounts for over 30 percent of all the power consumption. People talk about an energy shortage, but we already have enough power; we just don’t know how to use it. We could save a huge amount of money and energy by switching to LED. I think the tide is going to turn soon. It makes a lot of sense both economically and socially.” 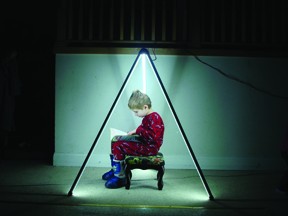 Sustainability walkway Over the Hudson Led