Lessons from The Hills: Gardening on Rocky and Steep Slopes 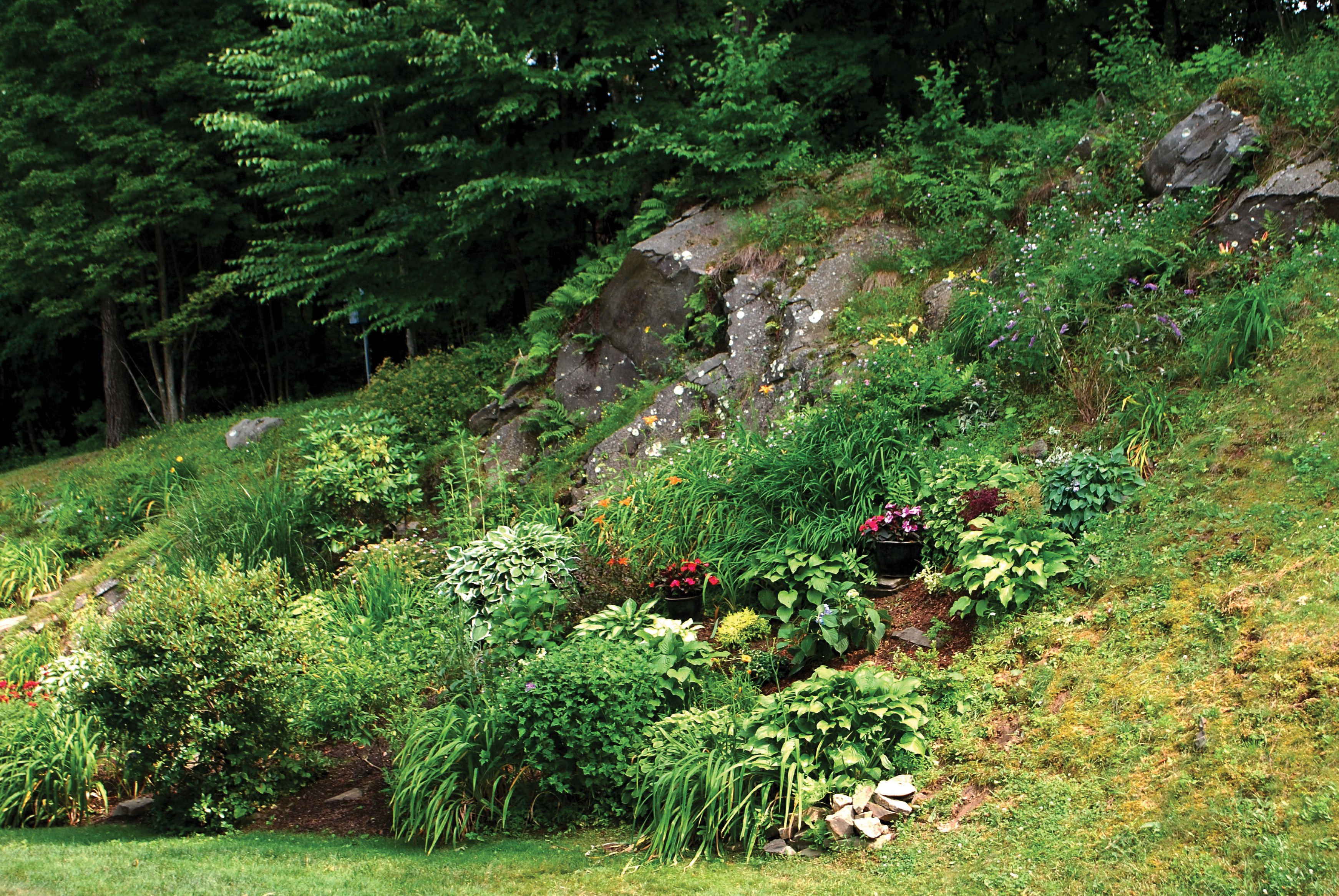 Rock in Them Thar Hills

The Hills neighborhood of Port Ewen was created in the mid-1980s by blasting bluestone outcroppings that overlook the historic Rondout waterfront in Kingston. Nearby is a bluestone quarry, one of many that provided the principal material for the construction of New York City's sidewalk system in the late 19th and early 20th century.

The first home buyers in The Hills encountered a beautiful blue-gray rocky moonscape; it was up to them to build lawns among the rocks and on top of bedrock. The landscape is also steeply sloped in many places; prospective gardeners have had to reckon with the eroding pull of gravity on the soil that they brought in.

Original homeowners Joe and Candy Erena looked at the pile of rocks the developer had deposited outside their home and decided to create a rock garden among them. That was 27 years ago, and they have learned a great deal by trial and error, especially about which plants can survive the harsh conditions. A few doors up, their friends Françoise and Alan Dunefsky were simultaneously working with a steep backyard that dropped precipitously into rocky woods. Françoise says that the first year, she brought in a $600 truckload of topsoil. When the snow melted the next spring, all of the carefully laid soil had slid over the embankment and into the woods. After that, she began putting in terraced gardens, lined with indigenous bluestone, to help stabilize the soil.

Newer residents of The Hills like Jim and Marianne Crist and neighbor Rick Foster have been able to learn from the experiences of the Erenas and the Dunefskys. In tackling the challenges of their site, a bond has been forged among the neighboring gardeners, and the series of gardens reads like shared parkland. These gardeners have things to teach anyone approaching a rocky or simply steep slope and wanting to enhance its beauty while keeping the precious soil in place.

Gardening on a rocky slope can be a big commitment, because gravity will challenge the gardener, the rocks, the soil, and the plants. For instance, slopes tend to be dry, so plants must be drought-adaptable, and provision must be made for watering. The rocks, even big ones that seem fixed in place, can shift downwards. If you disrupt indigenous/existing vegetation to make your garden, you have to be careful not to create more erosion in the process. On the plus side, rocky slope gardens can be gratifying aesthetically, because plants and rocks are showcased more individually and more dramatically on a slope than they would be in a flat border.

Rick Foster says that whether building a garden around existing rocks or creating something new by bringing in rocks, the first step is to spend time just observing. "The rocks should look pleasing to you with nothing else," Foster says. "This is what you're going to look at all the time, especially in winter. It's worth spending a year to first just enjoy the structure of your rock outcropping and/or the rock garden you built. Then eventually you will start to envision certain plants in certain spots."

The next step is to create safe and aesthetic points of access and to terrace the land if the soil is likely to erode. For neighbors Foster and Jim Crist, bluestone rock steps allow entrance to the terraces of the slope behind their homes. In placing the steps, Foster used rocks he found in the woods, and he endeavored to create a pleasing garden focal point that is also stable. Then came the soil-preserving terraces, which Crist says also provide a safe place to work standing up on relatively flat ground. (Before the stairs and terraces, there was only a jungle of overgrown vegetation that Crist was at a loss at how to approach.)

As with any garden, your rocky slope garden or terrace needs good soil preparation. In The Hills this usually means building up the soil with compost, because the bedrock is so close to the surface. However, there are limits to how much soil will remain. When Joe and Candy Erena started to create their rock garden out of the pile of rocks they inherited from the developer, they found that little soil was present. They did their due diligence and brought in topsoil.

"It just disappeared through the cracks," Joe Erena says. "We'd add soil and plant Japanese maple trees; they would do well for a few years then die." This was because the tree roots inevitably ran out of usable rooting volume, then the trees declined as though they were pot-bound. The trees became root-bound and desiccated even though the Erenas faithfully watered them (if you've ever tried to keep a tree in a pot for any length of time, you know how quickly and stubbornly the pot-bound roots dry out).

Eventually, the Erenas let go of their original planting scheme (e.g., Japanese maples) and stepped back and observed which plants volunteered in/migrated about the garden (volunteers are happiest). For instance, a white cedar found purchase on the rock, and they decided to embrace it. Originally, Candy Erena would put in annuals every year, but that was very labor-intensive, so she moved to perennials and to selectively retaining volunteers. "The rock garden changes every year," she says. "I'm always surprised and think: where did that come from? Every five years it's a completely different garden."

Some of the volunteers the Erenas have embraced on their rock garden include Siberian irises, hostas, myrtle, daylilies, wild columbine, and wild chives. Creeping phlox, sedum, hens and chicks, and ferns are among the plants that grow right out of the rock, with scant or seemingly no soil. Candy Erena says, "Avoid planting something potentially invasive because it's easy for those plants to take over a rock garden, because they so quickly out-compete the more delicate plants."

Françoise Dunefsky, Rick Foster, and Jim Crist have found that colony-forming shrubs—those that spread via underground stems and other means to send up new shoots (suckers) in a widening band—are especially useful for soil stabilization. These include forsythia, sweetshrub, flowering quince, old-fashioned lilacs, rugosa roses, deutzia, and red- and yellow-twig dogwood. Ornamental grasses are also useful because of their very tenacious root systems.

In Françoise Dunefsky's case, for her gardens on the steepest part of her property, she had to sacrifice sunny conditions. "I learned over 25 years that I had to make a marriage between certain trees and shrubs and that rock garden," she says. "I needed trees and shrubs for their root systems to help hold rocks and soil in place." Thus those gardens became shade gardens over time, necessitating some adjustment in the kinds of perennial plants used among the trees and shrubs.

It's difficult to have a rocky or steep slope garden that is low maintenance. Because they tend to be so dry, slopes and rock gardens need a lot of water, by hand or with sprinklers or drip irrigation. Debris cleanup can be tricky because it's not easy to rake among rocks. Candy Erena spends four to five hours a week in spring doing cleanup and two to three hours a week in summer keeping the beds weeded and relatively free of debris. "I really enjoy it, and I follow the shade, because it gets hot in a rock garden," she says.

Pollen, We Have a Problem