A play about the controversial life of Leni Riefenstahl, Hitler's favorite filmmaker 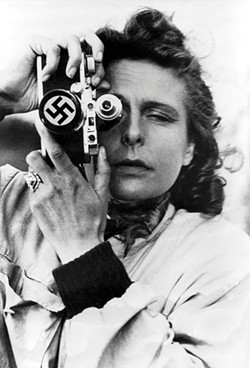 Bridge Street Theatre in Catskill will present "Leni," a play that captures the complexity of filmmaker Leni Riefenstahl, this month.

Legendary New Yorker film critic Pauline Kael called director Leni Riefenstahl "one of the dozen or so creative geniuses who have ever worked in the film medium." Riefenstahl's involvement with Hitler, however, complicates her legacy.

Oregon-based playwright Sarah Greenman explores Riefenstahl's controversial career in "Leni," a new play coming to Bridge Street Theatre in May. "It's a play about artists, the responsibility of artists toward their work, and what it means to be responsible or not," Sowle says.

Riefenstahl's acclaimed documentary Triumph of the Will (1935) is pretty uncomfortable to watch. The German filmmaker was fascinated with Hitler's ability to command the masses, so she filmed his early campaign rallies and speeches. The resulting film captures the 1934 Nuremberg Rally, combining heroic shots of Hitler speechifying with the monumental tableau of the massed Nazi party in formation. Nearly every theater in Berlin screened Triumph of the Will as Hitler rose to power. Its aestheticizing of military might became a prime propaganda tool for the Nazi regime. (Lest we forget, Hitler was named Time magazine's Man of the Year in 1938.)

Riefenstahl went on to document the 1936 Summer Olympics in Berlin. For Olympia (1938), she employed many groundbreaking filmmaking techniques—extreme close-ups and smash cuts among them—but the film divides critics, given Riefenstahl's close association with Hitler. It was rumored that she was Hitler's mistress, but she vehemently denied this. To her dying day—she lived to be 101—Riefenstahl insisted that she had no knowledge of the destruction the Nazi regime would cause—she just wanted to make great films.

Throughout her life, Riefenstahl was faced with dozens of court cases for her suspected knowledge of Hitler's concentration camps. But she never relented. She kept trying to make films, despite being blacklisted by all the major studios and despite her reputation. She also released books of photography, most notably The Last of the Nuba, which captures the Nuba tribe in Sudan, and Coral Gardens, which features Riefenstahl's underwater photography.

The play posits Helene—AKA older Leni—(Roxanne Fay) up against younger Leni (Olivia Howell). Leni, who has just died, returns to the film studio to make a documentary about her life. She hopes to set the record straight, which proves challenging when she meets her naive, younger self. "Things fall apart and it becomes more and more difficult to discern what the real truth is," Sowle says. "In this day and age, as we know, the truth is a moving target. That is very much a part of the play."

The play opens with Leni pleading with Hitler for money to complete Olympia. Older Leni continues to visit questionable moments from her life. "Leni" does not come to any simple conclusions. Rather, it highlights the complexity of an artist's relationship to her work. The production includes screened clips of Olympia and Triumph of the Will to place the story in context. Bridge Street Theatre will hold informational programs for viewers to attend in conjunction with the play. "It seems extremely important that this incredibly interesting subject is explored and put into historical context," Sowle says.

The original print version of this article was titled:
"A Fascination with Fascism"

Metropolis with Live Score in Woodstock