The New Head of Doane Stuart School Aims for Accessibility

Private schools often get a bad rap—the cost of the tuition alone is enough to spur a protracted debate on the disappearing middle class. No one knows this better than Cecil Stodghill, the newly appointed head of the Doane Stuart School in Rensselaer, a co-ed independent college preparatory school serving grades Pre-K through 12. Stodghill has spent most of his career in independent schools precisely because he believes in their power to change lives.

Stodghill was raised in Chattanooga, Tennessee, by a single mother who made ends meet with the help of government assistance. His own education began in one of the city's public schools, which he describes as "struggling." Despite that, one of Stodghill's teachers could see his potential. Hoping to make a difference in his future, she reached out to an admissions counselor at the nearby private McCallie School on his behalf.

With financial aid, Stodghill's mother could afford to send him to the all-boys college preparatory school through his high school graduation. "It was by far the best thing that happened to me," Stodghill says. "It exposed me to an entirely different education, to ethnicities different from my own, and socioeconomic resources I had never seen."

Stodghill went on to earn a bachelor's degree in business from the University of Miami and a master's in school education from the University of Tennessee. He has dedicated the last 21 years of his career to making independent schools more accessible for the students in their communities. Most recently, he was an admissions director at an independent school in Charlotte, North Carolina. During his tenure, the school's enrollment rose 11 percent, with a significant increase in students of color and international students. "I came to those schools as a way to give back, and to give access to kids like me," he says.

For Stodghill, the low student-to-teacher ratios and high college acceptance rates are only part of what independent schools should be offering students and their families. They should also have a responsibility to reach out into their community. 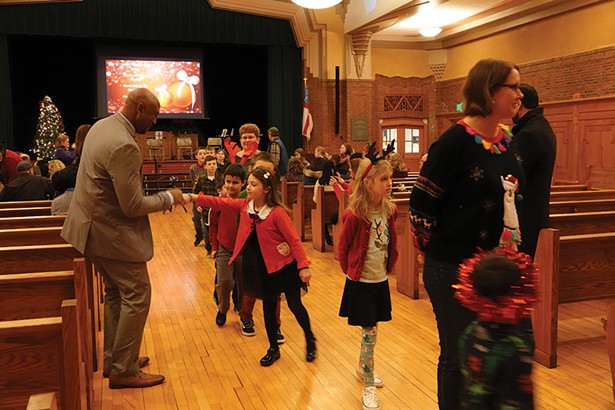 At Doane Stuart, that will mean strengthening its ties to Rensselaer, which it relocated to from Albany in 2009. It also means focusing on real world issues like community service, social justice, and environmental sustainability, which will make its students more engaged citizens. "We're here to give students the tools to be productive contributors in our community," Stodghill says.

It's clear that Stodghill's passion for his work comes from the impact his independent school education had on his own life. It's also something he has been cautious about bringing to the forefront of the conversation until now. When you consider the fraught nature of the national conversations on Southern identity, minority status, and poverty, it makes sense. Each issue has a complicated enough history for a person to carry on its own, let alone all three. As Stodghill mulls over his own story though, he seems increasingly at ease with its truth. "It's who I am. It's why I'm here today."

Presented with The Doane Stuart School