An Irreverent Holiday Show at the Fisher Center 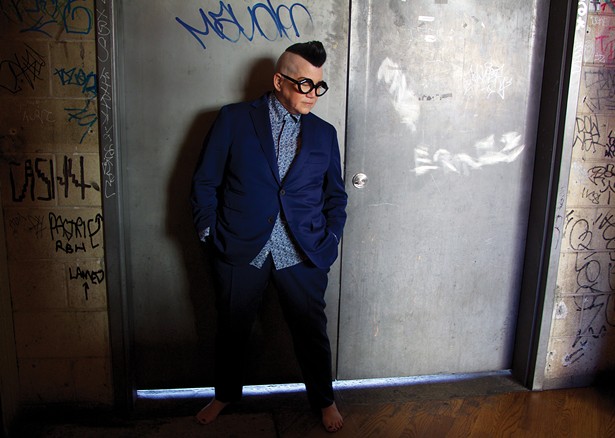 While her role as the sassy butch Big Boo in "Orange is the New Black" has made Lea DeLaria a household name with Millennial binge-watchers everywhere, older folks will remember her from the early '90s as the first openly gay comic on television. For over three decades, DeLaria has made a career blending comedy, music, and LGBTQ activism in a flavor all her own. She will perform "Oh F*CK It's Christmas," at the Fisher Center on December 8 at 7:30pm. Tickets are $25–55.

You were the first openly gay comic on television in America—that is a big mantle to hold. Did that feel like a role you had to fill?

That was my first big feeding frenzy in show biz. That was on "The Arsenio Hall Show," which, at the time, was the number one late night talk show in America, but it was also internationally seen. That was the first time I was projected into global fame, and what I got to do was tour to every English-speaking country in the world—Australia, England, all over Canada. It was kind of an amazing ride in those days.

It wasn't like I felt any responsibility in terms of it being a "role." That's not what I do. It gave me a worldwide platform in which to share my political views.

Since Big Boo got shipped off to Cleveland in Season 5 of "Orange is the New Black," what have you been working on?

Um...a lot. Like a whole lot. I'm on "Shameless," I'm in Cars 3, I was in a play, I did a world tour, and I'm about to go on tour again to the West coast. There's no rest for the wicked...or the weary...or those of us facing and fighting fascism every day. Even Rosie O'Donnell is going on tour again for first time in 20 years. None of us are shutting up.

You've recorded jazz albums and been on Broadway, on TV, in feature films. Do you have a favorite medium?

Not really because just love working and being in show biz. I lead an incredibly charmed life. I never wanted to do anything other than what I'm doing. Not many people can say that. I also have the luxury of counting myself as one of people who has helped change the world and made my community a better place for people to live in—that is the cherry on top of the sundae of the career. I've pulled no punches. I've always been exactly who I am and said what I think, and managed to look like me. That's fucking amazing—ask anyone.

How would you say you've helped change the world?

For one thing being first openly gay coming on TV was a pretty big deal. I was the ring of keys for I don't know how many people. "The Arsenio Hall Show" had a viewership of 20 million people. Now "Orange" has a viewership of over 100 million. I am still the ring of keys for a lot of people in that respect—just in visibility alone. There was no one like me on TV when I was growing up.

Plus the fight for our rights and our freedoms. I've been on front lines for everything from AIDS activism and changing society's perception of people with AIDS, all the way to gay marriage, and now this whole fight with the trans community and The Tyrant [Trump].

But I will say, I am certainly not alone in this—I am part of a group of people who have changed the world. That is my life's work realized.

So, "Oh F*CK It's Christmas." Is it fair to call this show an irreverent spin on the classic Christmas variety show?

You got it entirely. It's going to be disguised as classic Christmas show, then about 10 minutes in, you're going to go, "What the fuck?" It's a lot of craziness, audience participation, and also railing against current administration, because you can't do anything without doing that.

What can people expect from the show?

You're going to hear some secular Christmas tunes and then some things you're not used to hearing. It's going to be a really fun, crazy time.

With a title like that, it makes me think you have a fraught relationship with the holidays.

Who doesn't? I definitely do.

What was Christmas like in the Delaria household growing up?

Growing up we had great Christmases. It's completely different as a kid. It was just about my parents giving me candy and presents. Even though we were not very rich and sometimes all I got was a sweater, we were still happy to get it. Now it's so much more complicated with the whole PC community getting involved with the holidays.

It isn't fucking Thanksgiving yet and they already have all the Christmas shit up on our block. It terrifies me that I'm going to hear the music at any second. It's a frustrating, nutty time wrapped up in 21st-Century life.

What made you want to jump on the holiday show train? Do you have a favorite Christmas performance?

Are you performing "Oh F*CK It's Christmas" anywhere else?

I doubt that I will take anywhere else—it was really for Bard. So this is one of the only Christmas shows I'll ever do—That is a reason for y'all to come out. The other thing I have to say is that the band I'm bringing is made up of ridiculously great female musicians.

Do they have a name?

Who my trio? I tend to call them the United Colors of Benetton Band. We have Helen Sung, who is Asian, on piano, Endea Owens, a beautiful black woman on bass, and Sylvia Cuenca, a Spanish woman on drums. The guitar player, Sheryl Bailey, won't be there this time, but she is a dyke, and I'm a dyke. So yeah, I call us the United Colors of Benetton, or the Public Theater Company of Oklahoma. Ha. Not everyone gets that.

You are a talented, acclaimed jazz singer. Yet this show is a bit of a funny, sardonic take on the holidays. When you were writing it, how did you strike the balance?

Well I always do that. That's been my MO since beginning of career in 1982 in San Francisco. I've always combined music and crazy, wild, in-your-face comedy.

My father was a jazz pianist in night club in east Saint Louis, and I sang with him when I was a young girl. I know music really well—I read it, I do theory, I am a scat singer. I have five records out on the Warner Jazz label.

Sometimes people get suspicious of entertainers that can do a lot of things, especially actors that then branch into other things.

But I was a jazz singer first for 20 years, then a stand up comic for 10 years after than, and then boom I got my first acting gig. So my career as an actor is what people should be most leery of, if you know what I mean.

Is there anyone who should NOT come to this show?

Everybody should come, but if I offend you, be prepared to walk out.

Does that happen often?

No, most people know who I am and what I stand for. But some people show up and get very upset when I start taking down Trump. I don't know why, I very clearly can't tolerate the Tyrant. It's no secret. If you follow me on Instagram (@realleadelaria), you know I do #Fucktrumpfriday every week.

Anyway, my guess is that won't happen at Bard.

What is the most unwanted Christmas present you ever received?

Honestly, I can't think of a damn thing. Not a sweater or a pair of socks. As a kid always, always grateful. And as an adult people tend to get me things they know I want like champagne and tequila.

What is your favorite Christmas album?

Ella Fitzgerald's solo album. It's fantastic. I think you will recognize my rendition of "White Christmas" is a tribute to her. It's a big scat number.