The Deal Goes Down

Tony Cassella is on his way to a funeral, riding the Amtrak down the Hudson, when a woman he barely knows proposes he commit murder for hire. She’s tying one on in the club car, ranting about her cruel, vicious, extremely wealthy pig of a husband. A retired private investigator, Tony’s perhaps less shocked than most of us would be at the suggestion. Still, he tries to shut her down. But with his house in Woodstock 36 hours away from foreclosure, the idea of a fat payday proves irresistible.

It’s not just the payday. With wife and son dead, daughter estranged, and a body that’s starting to feel all 70 of its years, Tony admits to himself that he may have just been feeling ready for something entirely different. And that’s what he gets, in spades, as it turns out there’s pent-up high-end demand for removal of dangerously nasty husbands. His fate becomes inextricably entwined with Maddie and Liz, two extremely determined women, and he finds himself taking on the seemingly impossible case of a closely guarded Russian oligarch whose nickname is God.

Woodstock resident Beinhart, an Edgar Award winner whose novel American Hero was adapted into Wag the Dog, wrote a column on politics for this magazine for many years. His Ulster County noir voice is second to none; he has an OG understanding of the Catskills, with all its troubles and graces. He groks the majesty of the river, the enchantment of the deep woods, the gruff-but-neighborly hinterlands dwellers, the skullduggery afoot in the corridors of power and the abundant ironies that arise when one-percenter wealth rubs elbows with folks who don’t own much more than their shoes, when Buddhist monks neighbor with hedge fund managers. He has loads of insightful fun with New York, from the mountains west of Woodstock to the Trump Tower in Manhattan, and even becomes his own buddy: Tony’s best friend, who never quite takes the stage but impacts a highly significant plot point, is an aging writer named Larry Beinhart. They’re part of the Bread Alone coffee klatch.

Some male-identified authors visibly struggle with writing believable, female characters; Beinhart has populated an entire book with memorable ones, including Allison, a sex worker who becomes Tony’s strongest ally. The women he finds himself working with are not flawless goddesses nor shrinking violets; they’re people, and he treats them that way, neither giving undue quarter nor attempting to bulldoze their feelings or contributions into insignificance. The theme and plot lend themselves to a deep dive into gender relations, gracefully executed; we come to understand that certain husbands might warrant killing, and that they are hard to get at.

Tony is a retired PI with a philosophical bent, unassumingly cultured, and his affinity for nature spirits and cats, along with his Zen-inflected problem solving process make him a lot of fun to ride along with. Seventy or not, he can still hold his own in a dangerous situation, which is a nearly constant state of affairs, especially once he and Allison head over to the Austria to infiltrate God’s chalet.

Beinhart has a gift for working nuance and insight into a plot that romps like a thoroughbred just turned out to pasture; secondary characters, like cat sitter Caroline Sunshine and a young Woodstock weed dealer, are vividly rendered in just a few lines. His dry, often hilarious, heartfelt style is reminiscent of sitting in a dimly lit bar with your coolest friend, listening to his epic stories and sipping Coke after a while because you want to remember every word. No fan of intelligent thrillers should miss this one, but be warned; sometimes “can’t put it down” isn’t just hyperbole.

Larry Beinhart reads and signs on August 7 at 2pm at the Golden Notebook.

The Story of Historic Kingston

Blauweiss and Berelowitz tell the origin story of their beloved city in this book that’s perfect for the coffee table. Over 950 photos, maps, and drawings are spread across 475 pages, weaving together a town history that dates back to the Ice Age. The book is broken into two parts—the Ulster County section takes readers through the land’s earliest recorded history through the 1900s. It also includes details about the construction of some of the area’s iconic landmarks, including the Wurts Street Bridge and Mohonk Mountain House. Historic Kingston, the book’s second section, takes a deeper look at the area’s earliest neighborhoods: Rondout, Uptown, and Midtown, and the city life within them.

Jill Dearman, gives a gender-swapped take on the infamous Leopold and Loeb 1924 Chicago murder case. In the Hudson resident’s book, Wilhelmina “Will” Reinhardt and Dorothy “Dolly” Raab are college roommates at Barnard college in the early 1920s. Both are musicians and share an obsession for music, spending most of their time in Prohibition-era speakeasies and Harlem jazz clubs. Dolly captures Will with her beauty and charm but she quickly gets caught up in Dolly’s rebellious love for crime. When Barnard and their wealthy families team up to break up the passionate couple, the two plan a murder.

Also a Poet: Frank O’Hara, My Father, and Me

Andes resident Ada Calhoun stumbles upon 40-year-old cassette tapes of interviews her father, acclaimed art critic Peter Schjeldahl, had conducted for his never-completed biography of poet Frank O’Hara. Calhoun grew up in the East Village of New York City, where O’Hara lived and made the subject of many of his poems. In her memoir, Calhoun embarks on a journey to finish the book, providing new insights into the life of one of our most important poets and confronting her complicated relationship with her father and her own need for his approval.

We Were Never Here

On the last night of their backpacking trip in the mountains of Chile, Emily returns to her hotel room to find her best friend Kristen surrounded by broken glass and blood. Kristen tells her that she had to kill a fellow backpacker in self-defense. This raises suspicions for Emily because Kristin had killed someone on their annual trip the previous year and told her a similar story. Emily begins to question everything about Kristin but helps her cover up the scene. After Emily returns home to Wisconsin and Kristin shows up at her doorstep unannounced, Emily must finally confront the truth about her best friend.

Sorry We’re Open: The Truth About Retail from My Side of the Counter 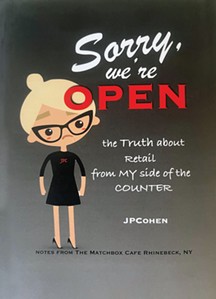 J. P. Cohen’s Sorry We’re Open is an entertaining romp through the front lines of the service industry. Customers frequently want employees to go above and beyond for them and pretend to be happy about it, but what about the workers’ feelings? Cohen uses stories from her time working at the Matchbox Cafe in Rhinebeck, a restaurant she and her husband Sam opened in 2011, to give a comical retelling of the experiences of a restaurant worker, begging to reshape the way Americans think about service workers. Cohen argues for a deeper need to be kind to those serving you, even if they don’t smile.