I have seen civilization and it's not us. 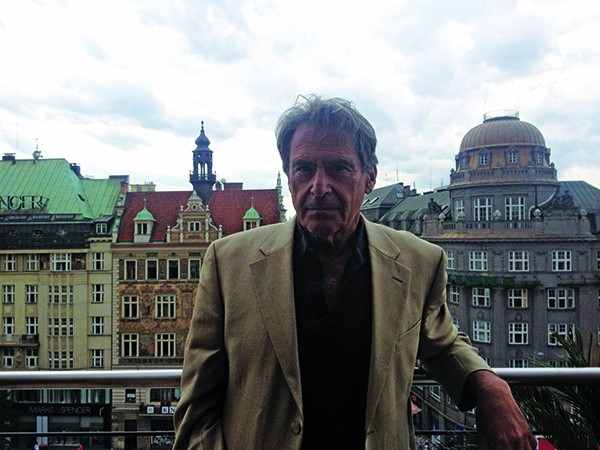 The winter of 1989-90, shortly after the Berlin Wall came down, was the first time I went to Prague.

This was not the first time that the Czechs thought they were going to be free. I had happened before, back in 1968, and it was called the Prague Spring. But in 1969, Russian tanks rolled into the city. One of the many acts of resistance was by Jan Palach, a student, who burned himself to death at the top of Wenceslas Square. In 1989, when demonstrations took place on the 20th anniversary, the police attacked with batons and water cannons.

We knew absolutely nothing about any of that when, one year later, we walked into Wenceslas Square. It's not a square at all, it's more like a broad boulevard, just over half a mile long, up a gentle slope, getting somewhat steeper before it ends at the National Museum. It was full, a quarter million people, maybe half a million. And this year was the year when everything changed. Vaclav Havel, the playwright and political prisoner who had become president, had just returned from addressing the United States Congress. He was about to fly to Moscow to tell Brezhnev to take the Russian troops home.

This time it was called the Velvet Revolution. This time the Russians would leave.

The crowd was singing. I had the sensation that I knew the song, but, because they were singing in Czech, I couldn't quite figure it out. It took me at least a verse and a chorus, maybe two of each, for me to realize they were singing "We Shall Overcome."

Much of the past was still present. The exchange rate was totally artificial, hard currency from the West was to be greatly desired, so there was a black market. After we traded dollars for kroner, beer was 5¢ a glass and fancy beer was 10¢. Dinner was only $1. The question was not what a better dinner might have cost, but if a better one could be found. It was the tail end of winter and the only vegetables were potatoes and pickled things, the only fruit was bananas from their Communist brothers in Vietnam.

Capitalism was about to be unleashed. We've all seen how money can devour a land. When the metaphorical flock of doves that had been released over Wenceslas Square looked down at all the opportunity below, would they turn into a clutch of vultures?

Now, I'm back, 25 years after the fall of the wall in Berlin that announced the beginning of the end and the start of the transformation.

There are shops everywhere. Advertisements. Lights. Wenceslas and the rest are packed with tourists. The street corner hustlers who offered to change my money are gone. Now you get kroners right out of the ATM, just like anywhere else and there are no more quick profits for enterprising individuals in the shadows, but plenty for the banks who get to dip their beaks at both ends of every deal. Beer in a pub is up to a dollar and half or two or three. It's still good value. The food has vastly improved. A good meal is somewhere between half and two thirds of what I'd pay back in the USA.

Public transit is affordable, frequent, clean, and safe. Cabs are inexpensive. You call one by text from a cell phone. They text back their arrival time and license number so you know which one is yours, plus a link to a GPS, so you can watch their progress as they come to you. Drugs have been decriminalized. Not just marijuana, but also cocaine, heroin, and meth. The population does not run riot. The streets are safe.

There are parks everywhere. They're clean. The streets are immaculate. The sidewalks are paved with patterns of white and dark stones. They have bad opera (the one I saw), and, I presume, good opera. There's theater, ballet, techno, decent Internet access, and lots of bars.

I'm lunching at Café Slavia by the Vltava River. I'm told it was Vaclav Havel's favorite. The food is good. Smoking is allowed. Right at your own table. The big story from America is the shooting of a civilian by the police in Ferguson. Followed by the launching of the police in total SWAT mode. Armored vehicles. Armored people. Tear gas. Lots and lots of guns and still more guns.

Fergueson, like much of America, is a town that has been abandoned to poor, dark people, because they are poor and dark, while what money there is has migrated to Wal-Mart Lands.

It may be that I simply have an elitist aesthetic. I prefer affordable, beautiful old cities, retrofitted for modernity—plumbing, Internet, and such—to suburban sprawl, McMansions, and post-industrial Detroitscapes.

It occurred to me that in many places all the money flows to the capital, leaving rings of poverty and increasing destitution the further out you travel.

My next stop was Budapest. I took the train. I'm a regular Amtrak rider on the Empire Service along the Hudson River. Though I'm very fond of the ride, and of the view, there are long stretches of casual garbage dumps on both sides of the rails. So it was with a certain amount of trepidation that I began peering out the window.

I saw roller bladers skating down a lovely pedestrian path. There was a stream beside the path.

Who had picked up all the plastic bottles? Why was the landscape not defaced with plastic bags, blown hither and yon, caught on trees and shrubs. Where were the chunks of concrete and rusted rebar? I watched and watched until it got dark and it remained scenic, pleasant, and clean.

It was if I had seen civilization and it was not us.