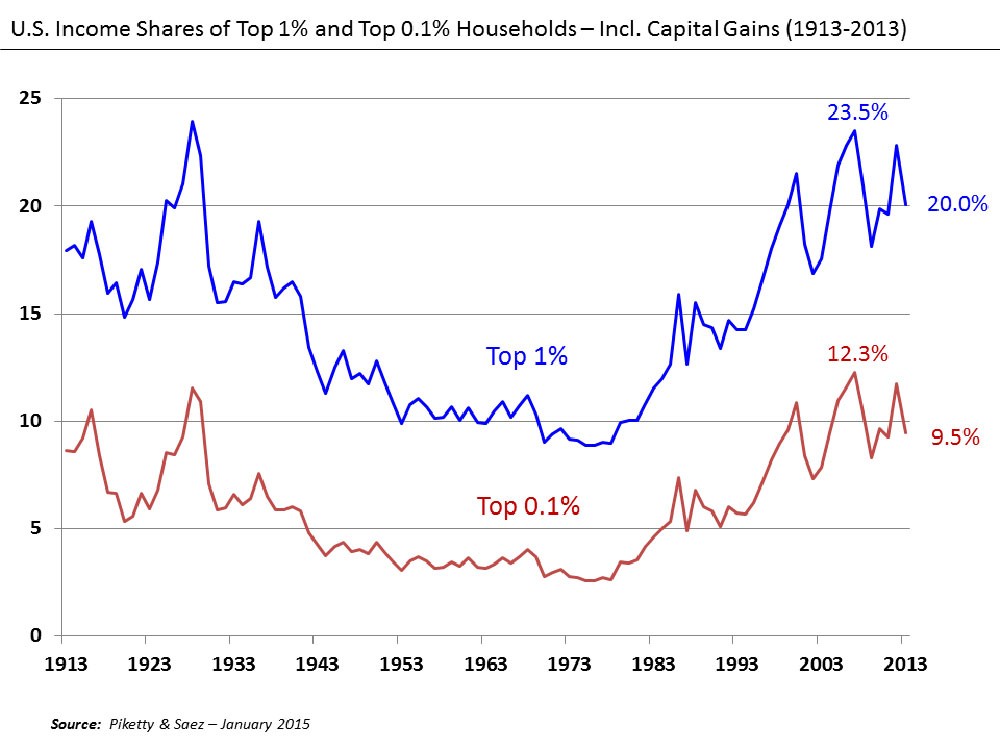 The rich can't be trusted with money.

This is true. I mean it's not theory. It's not attitude. It's not a bumper sticker. It's the facts, the events, speaking out. Look at the chart of the share of income going to the top 1 percent or the top 0.1 percent over the last 100 years. Note the spikes: those moments when the rich quickly grab whole new slices of the national pie.

Coming out of World War I, the top marginal tax rate was 70 percent. In the 1920s it was cut down to 24 percent. There was a boom. The share going to the rich shot up. It turned into a bubble. Even a double-bubble bubble. It ended with the Crash of 1929. Massive bank failures. The Great Depression.

The next spike occurred in 1936. Under Roosevelt, with taxes up and spending up even more, a recovery was going full steam ahead. But the sort of people who weep and whine about deficits now did so then. It seemed to make sense. The upward momentum seemed set to continue. Roosevelt cut spending. It wasn't so much that more went to the top, it was less going to the rest. The recovery came to a dead stop, then headed down.

After that, the share of the economy going to the richest among us went into a long, slow downward glide—until Reagan in the 1980s. It was "Morning in America" again! Until it ended on Black Monday, October 19, 1987. It was a worldwide crash. The Dow Jones Industrial Average fell 22.6 percent, the largest one-day decline in history. By then, the Savings & Loan Crisis was underway. Sixteen hundred banks failed. The bailout cost $160 billion. Back then, it seemed like a lot. Then came a recession.

The next big spike came in Clinton's second term. A Republican Congress pushed him to cut the capital gains tax from 28 percent to 20 percent. All right-wing think tanks herald this as the true cause of Clinton's economic success. But recovery and growth were already after George H. W. Bush's tax hike and were continuing with Clinton's tax hike. What the capital gains tax cut actually did was mark the moment when the dot-com boom turned into the dot-com bubble, which turned into  the Crash of 2000, followed by the recession in George W. Bush's first term.

Bush responded by cutting taxes on the rich. Twice. Economists will tell you there was a recovery. But there was an inexplicable mystery: it was a "jobless recovery," something never seen before. Mysterious. Inexplicable. Actually, there were two economies. One for the rich. Booming. One for the rest. In persistent recession. It all came to a climax with the Crash of 2008. With stupendous bank failures. A $900 billion public bailout. And a secret $27 trillion one to keep the financial industry alive and thriving. It was followed by the Great Recession.

After the Crash of 2000, George W. Bush cut taxes. The result was a new boom-to-bubble for the rich, big enough that the gross numbers masked the fact that the recession continued for the rest of the economy.

History, the facts, suggests that the thing to have done was to raise taxes after the Crash of 2008. That may sound counterintuitive. Illogical. Worse, heresy. But that's the way it's worked in the past. But the Bush tax cuts had been written so that they could not be immediately reversed. Plus Obama's economists were mathematical model people, not reality based. And Ben Bernanke, head of the Federal Reserve, was a monetarist, who believed that if you gave bankers unlimited money they would use it wisely for the good of all, instead of just to make money for themselves.

So, yes, they cushioned the fall. Obama managed to get in some spending. Which helped. But it was not until he was finally able to end the Bush tax cuts that the upward trend really began.

In the 1950s, when the top marginal tax rate was 90 percent, the American economy was booming! We built cars. Air travel became common. Telephones became universal. Cities rose higher. Suburbs spread out. From the mid `60s through the end of the `70s—with a top marginal tax rate around 70 percent—the economy continued to grow, in spite of the Vietnam War, in spite of the Oil Crisis, in spite of inflation. Some of the inventions from that era: microprocessors, liquid crystal displays, word processors, pocket calculators, digital cameras, e-mail, laser printers, personal computers, portable computers, compact discs, the Ethernet, MRIs, cell phones, the artificial heart, supercomputers, and roller blades.

Let us not underestimate inventors, innovators, and entrepreneurs.

Ronald Reagan famously said that after he made a movie that took him up into the high tax brackets, he had a disincentive to make another movie and would turn them down. Does anyone, even devout conservatives, think the world is worse off because we missed a sequel to Bedtime for Bonzo?

In reality, most people in the arts do it for the art. And for the glamour (depending on the art). And they're happy for the money if there is some. But art does not disappear with high tax rates.

Most people in the sciences aren't there for the big bucks. They're there for something else. The people who started Apple and Microsoft did so when taxes were much higher—with far fewer loopholes—than they are today.

Don't underestimate entrepreneurs. They are brave. Hardy. High taxes won't stop them. They don't need low taxes to get them off their asses.

One more thing. The growth rates since the big tax cuts of the Reagan years, which still set the standard for where we are now, have never been as high as when we had the high rates under Roosevelt, Truman, Eisenhower, Kennedy, Johnson, Nixon, and Ford. If you are looking for a correlation between tax rates and growth, between tax rates and high employment, between tax rates and high salaries and wages—it's counterintuitive, it's not what you've been told, it's not logical, it's just factual—higher rates correlate with better conditions. The lower rates correlate with instability, crashes, recessions, and lower incomes for normal people. Go figure. Go vote.

The Sixth of November

Otto Adolf Eichmann and the US 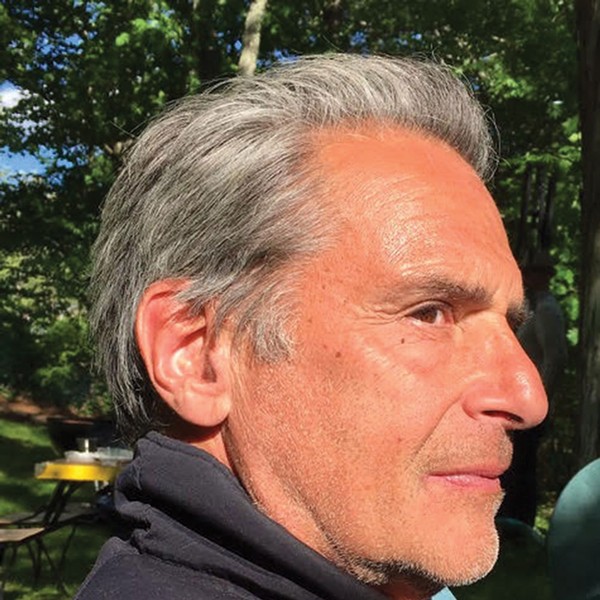