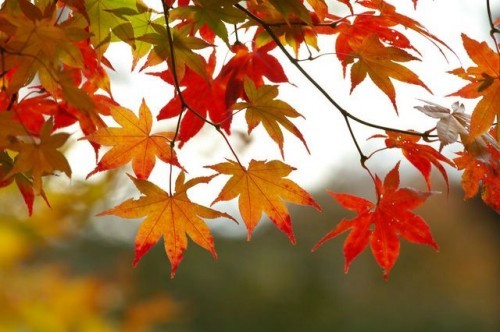 This is an ode to autumn
as the leaves fall down to the ground.
Quite soon, oh Lord, we can watch the news
without the election around.

We give the thanks of the season,
the unending election will be done.
Who could imagine so little meaning
in such a grinding, relentless run.

`Twas not about the great issues,
about our aspirations and hope.
`Twas in the end, a slip of the tongue
`twas an election about The Grope.

This is an ode to autumn,
Though soon the last leaves will be done.
This is a song of Thanksgiving
that someone will have finally won.

It's too easy to bash the Donald.
I wish someone could explain the hair,
the gargantuan gut, the orange skin,
and how he can make people care.

Has there ever been a candidate
so committed to being uncouth?
Rarely has there been so much noise
so completely detached from the truth.

That was a bombshell exposé.
named such on the Drudge Report.
Though as exposés go, you must admit,
those about tweets are very short.

what else do you think they does?
But, this is an ode to autumn.
It will end, is what we wish to say.
So let's clasp our hands in thanksgiving
and carve a Trump for Turkey Day.

Wait, many people adored Him,
and many folks hated Her.
So let's reminisce a little bit
about how good that hating were.

The National Enquirer shouted that
"Hillary Hitman Tells All!"
Oh, for the days of Ghostbusters
when you know who you could call.

Drudge drudged up Bill's old affairs
and said Hillary, she had them too.
Bob, he got his Nobel prize
but he's lost in the sex election blues.

Dear Hillary, yes, she has many faults.
Little natural warmth and other lacks,
even her liberal credentials are tarnished
by the gold from Goldman Sachs.

But I insist this is an ode to autumn.
To the golds and reds of turning trees.
Why is it so warm in November?
Why is climate change so hard to believe?

It is rigged, there's fraud, it's fixed.
That is what The Donald has said.
But still I wonder and still I ask,
"What's that on top of his head?"

True, the establishment turned against him,
from the left, middle, and right.
Conspiracy? Or embarrassment?
Trying to get the loony out of sight.

I don't want to accuse The Donald
as a person who tells lies upon lies.
You're entitled to choose whom you wish to believe.
Him, or your own lying eyes.

This is an ode to autumn,
on that I must insist.
Yet The Groper still he haunts me
and the images still persist.

I see him gross with belly fat,
I see him rubbing full of glee,
on slender, younger women, the
most private parts of their anatomy.

Many aspire to be like The Donald,
to be rich and crude as Trump,
to feel free to reach right out,
groping and squeezing the nearest rump.

Donald's world is a very special place,
a grand ritzy, glitzy titty bar,
where strippers truly love you
when you're a reality TV star.

But, oh, this is an ode to autumn.
A song in praise of nature's way.
Let us pack up our partisan rages
in the attics of yesterday.

But the political wars of today
will continue, swears John McCain.
He will stop all Supreme Court nominees.
Oh, John, you used to try to act sane.

It was blind idiocy
that brought us the crash and slump.
That gave us the blind rage
that was fanned to give us The Trump.

The idiocy and the anger
they are still all around us today.
Is it a vain hope that the election
will finally take them away?

As we came to the end of October
I was having a marvelous dream,
that this tawdry, sneering campaign
was just being staged for Halloween.

So moved am I by the season
that I write in doggerel and verse.
Writing as if Hillary has won,
I may be doing something even worse.

I know I ought to have waited
until victory and loss had come,
not three weeks before the fact.
It could turn out dumber than dumb.

No matter, I stand by my ode to autumn.
Put aside the mean and obscene.
Watch the leaves as they fall,
breathe the air when it's crisp and clean.

Here is an ode to autumn
when nature turns to its rest.
Let's look to ourselves, look to our dreams,
and dream of doing our best.

Body Politic: A Problem of Revenue

The Sixth of November