“Landscapes and Figures”: A Solo Exhibit by Ralph Moseley At Lockwood Gallery 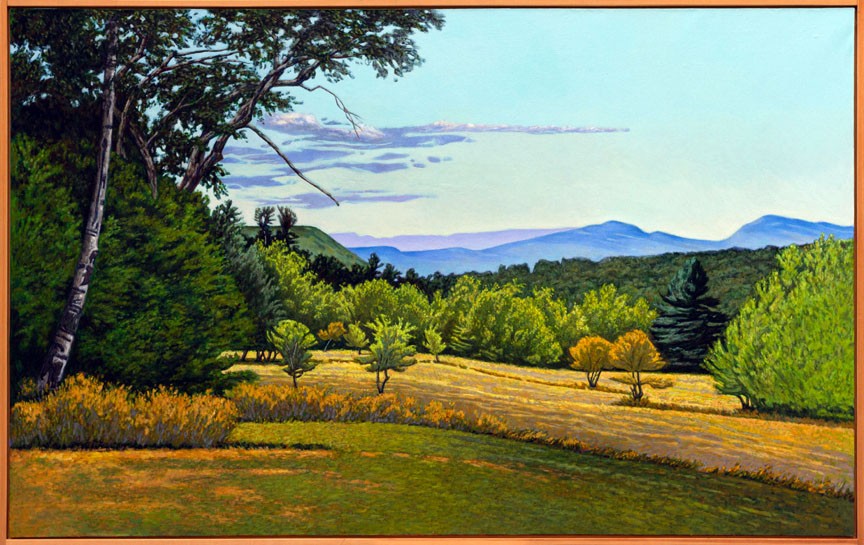 For the past 50 years, Ralph Moseley has painted in isolation, painting realistic landscapes, large-scale stylized depictions of figures, and abstractions loosely based on the landscape. While he has participated in a few juried shows at the Woodstock Artists Association and Museum (WAAM), his work has been mostly unknown, until now.

On June 22, a solo exhibition entitled “Landscapes and People” opens at Lockwood Art Gallery, located on Route 28 in Kingston. It will consist of 10 or so large-scale landscapes and figure paintings, along with half a dozen smaller realistic landscapes and a selection of Moseley’s abstract line drawings—an overview of many decades of art-making and Moseley’s first solo show since the 1970s.

After graduating from Williams College, Moseley found early success as a color field painter. He participated in the 1969 Whitney Biennial and exhibited at a gallery on 57th Street; the Whitney also acquired one of his works. By the late 1970s, however, when color field was in eclipse as a marketable style, Moseley disengaged from the art world and decided to paint solely for himself.

After many years of renting houses at the Woodstock Byrdcliffe Guild, in 2000 he and his wife built a house and studio on the mountainside in Bearsville, where he now lives full-time. Moseley’s studio overlooks a field with a view of the Gunks, a scene that he’s painted many times, “like Giacometti painting the head,” as he puts it.

“There are a lot of things you have to do in life, but art was always my way to be free,” Moseley says. “Landscape is really crucial to me, and the ingredients of landscape are in my paintings even if they’re abstract.” He also draws from the European classical painting tradition, noting that even his abstract work is “always composed—structured on drawing, color, and form.”

Moseley’s childhood friend Barbara Redfield, an artist herself, curated the upcoming show at Lockwood and has been a long-time supporter. “When you walk into his studio, he has every scrap of paper, sketch, painting, and journal entry” chronicling his entire career, she says. “There’s a whole spectrum of work and mediums. I’ve been saying for years, ‘You’ve got to get your work out there’ and six weeks ago, he called me and said ‘Let’s do it.’” The artist will be donating a portion of the sales to the Woodstock Artists Association and Museum, Woodstock Byrdcliffe Guild, and Woodstock Land Conservancy.